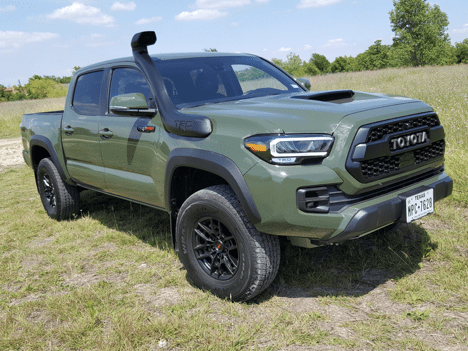 Besides, I’ve got a 2020 Toyota Tacoma TRD Pro pickup with a snorkel snaking up its roof pillar. I feel pretty prepared.

Actually, I was reminded of its presumed prowess every time I hopped into the Army Green Taco. Big, bulky and high-riding with black off-road wheels wrapped by 265/70 tires, the Taco always looked Baja-bound.

Based, of course, on the rugged Tacoma mid-size pickup, the Taco TRD looks seriously machoed out – and is.

Its large blacked-out grille fits the truck’s personality well and contrasts nicely with stylized headlamps that wrap back into the fenders.

Meanwhile, the sides of the Tacoma were fairly flat with slightly flared fenders that barely covered those 16-inch mudder-tires.

Typically, manufacturers install running boards on four-wheel-drive trucks with more than six inches of ground clearance, but they can hinder the truck in the rough.

As a result, the step-in was a bit challenging, but if I could do it, I’m pretty sure most adults can.

The thing that impressed me about the TRD is it looked more natural in full off-road garb than it does as a milder more civilized mid-size pickup.

But you’ll need to learn to live with its rough persona and off-road emphasis. The TRD sports Fox-tuned shock absorbers, a locking rear differential, crawl control, and a power-steering cooler. 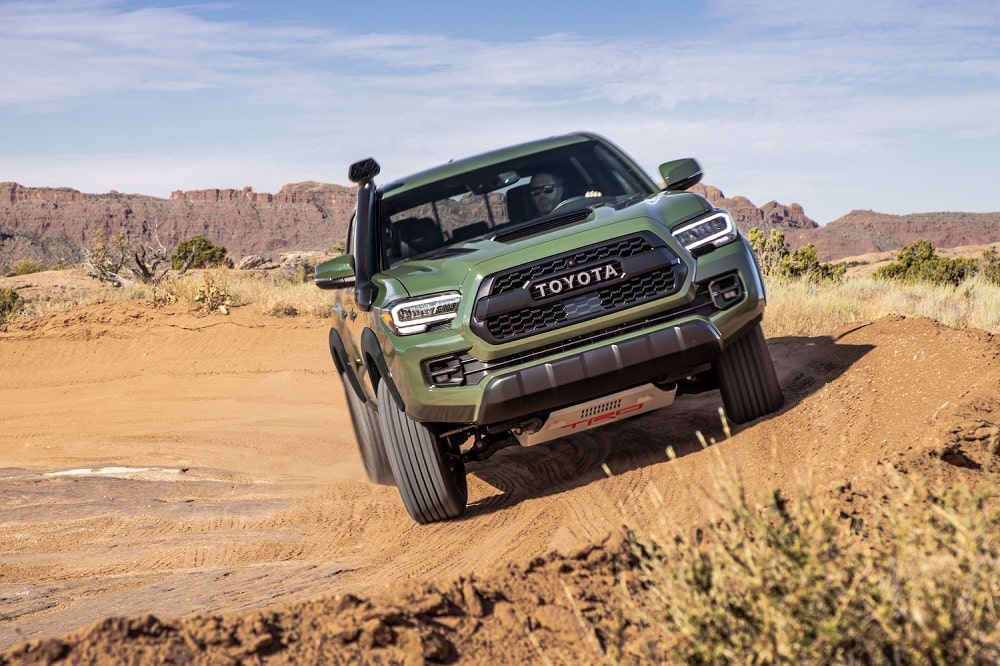 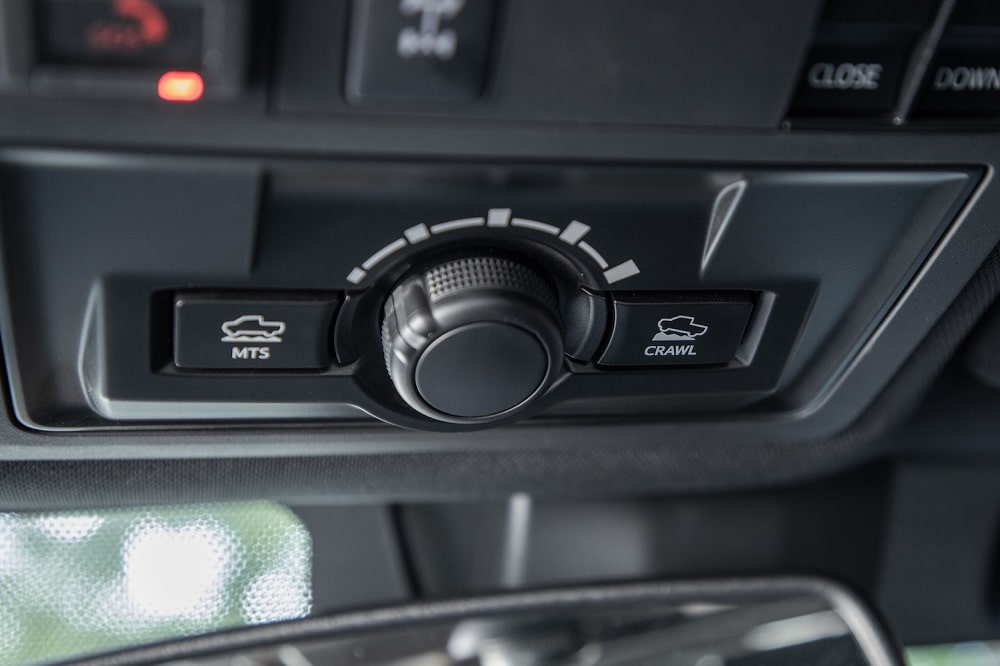 As you can probably guess, the $50,000 pickup doesn’t exactly glide over life’s bumps and potholes – despite its lofty price.

Below 40 mph, the truck suffers from side-to-side yaw, bounding and bumping over many city streets. Above 40, it smooths out some, but is still plenty fidgety.

After an hour or so, I got used to it – mostly.

Mechanically, the TRD is no different than any well-equipped Taco, relying on a 3.5-liter V-6 with 278 horsepower and eight-speed automatic to propel the 4,600-pound truck.

Although the Taco doesn’t feel spirited, it has reasonable torque and accelerates if you really nail it, hitting 60 miles per hour in an adequate 7.7 seconds, according to Car and Driver.

You can feel the off-road emphasis in the truck’s slow steering and long-travel accelerator – both of which take a little adjusting to get used to.

Despite its high-riding stance, the TRD gets average fuel economy of 20 mpg, which is not great but acceptable.

Initially, my biggest disappointment with the Taco was its plain, plastic-heavy interior. However, I figured a true off-roader probably doesn’t care.

Pretty stuff tends to lose its shine quickly in mud and dirt.

In fact, the only difference I could find in the TRD’s interior and that of a regular Taco were the seats.

But, I kind of liked its simplicity. 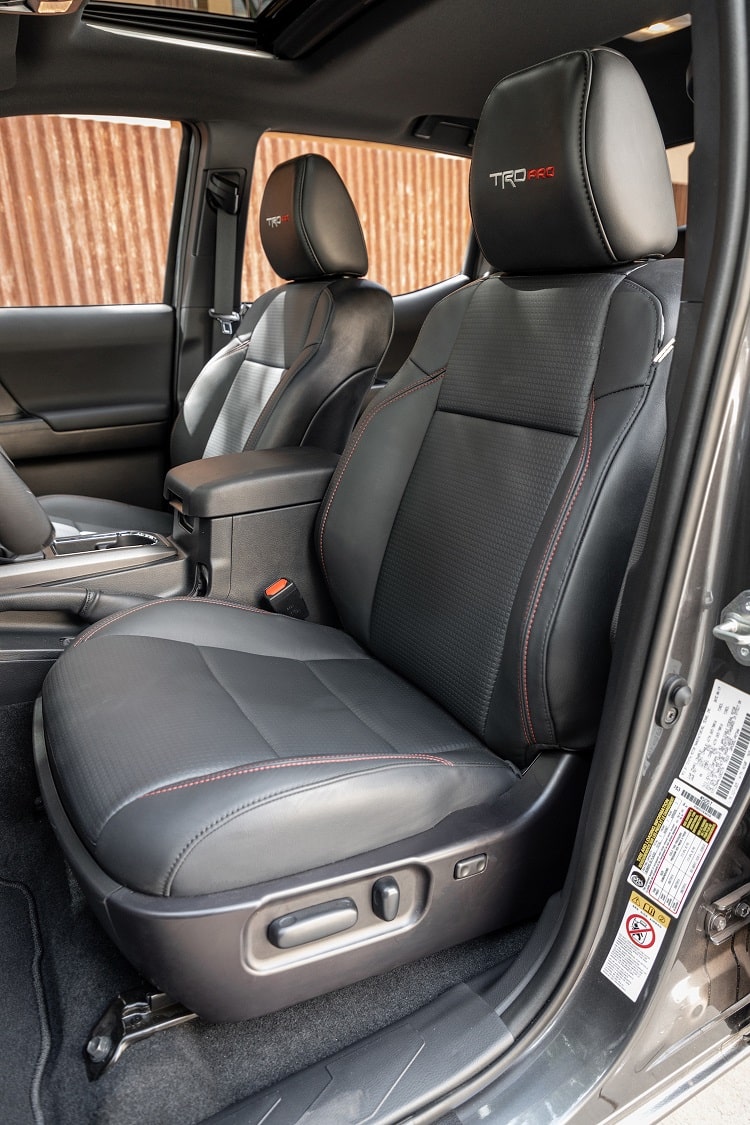 A flat upper dashboard topped an upright mid-dash that featured an 8-inch touchscreen with knobs for its various functions.

It did offer some nice textured plastic above the glove compartment, as well as buttons below the touchscreen for two-wheel-drive, four-wheel drive and other functions.

Likewise, the door-panels were mostly plastic. The one luxury inside were the leather seats, a fine set of thick, patterned black-rubber mats and a black mat for the pickup bed.

Head-and-leg room in back were fine for me, though I suspect it could get tight for large passengers.

Despite its high price, the TRD arrived with several options, including the flamboyant desert air-intake ($725); the bed mat ($79); and mudguards ($129).

I wish I could have found some space to really drive the Taco, but that’s getting increasingly difficult in a big growing city.

Still, these high-dollar off-road pickups are expected to at least be somewhat civilized.

And the TRD is, but it is tilted toward the off-road. If you can live with heavy-duty everything, the Taco might fit your needs – burly but reasonably priced and the sort of truck that might make neighbors wonder if you’re a survivalist.