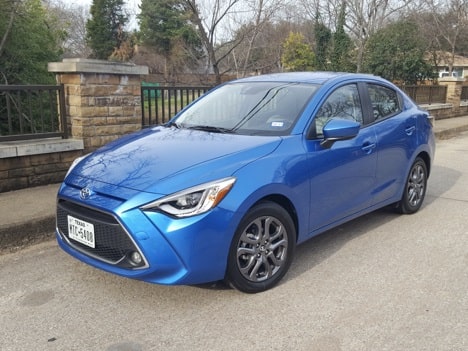 Life in the slow lane keeps my little Toyota Yaris and I well grounded – mostly in yesterday, but hey, we can see today right there on the horizon and we’re gaining on it, slowly. At least I’m not aging as rapidly.

OK, OK. All of that might be a slight exaggeration. However, after spending a week with the restyled 2020 Toyota Yaris, I learned that living with a dinky 106-horsepower subcompact requires some adjustments.

Like staying the heck out of the way of all those excessively large pickups and SUVs.

Actually, as one of Toyota’s smallest and least expensive cars, my teenager-blue $20,000 Yaris XLE sported some pretty decent features -- just none of them under the hood.

Foremost among its strengths was the fact that the new Yaris is now a rebadged Mazda2 with Toyota tweaks and interior features.

As you know, Mazda builds some of the most lively, driver-focused cars and crossovers on the market, so I figured any car with Mazda mechanicals and suspension pieces had to have soul.

For better or worse, the frugal, 35-mile-per-gallon Yaris looks largely like a miniature Toyota sedan, right down to its signature droopy, oversized grille.

If you can get beyond it, though, the rest of the Yaris was reasonably good.

Large headlamps perched atop the Yaris’ short front fenders, for instance, kind of drawing attention away from the tiresome grille, while a flowing character line above the door-handles formed a small shoulder on the rear fender. 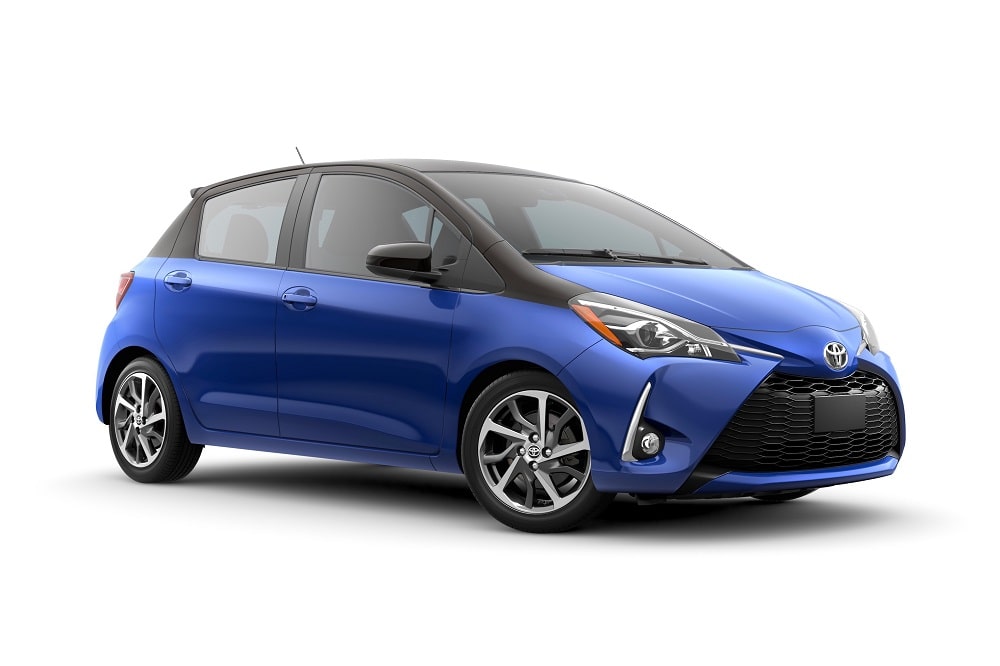 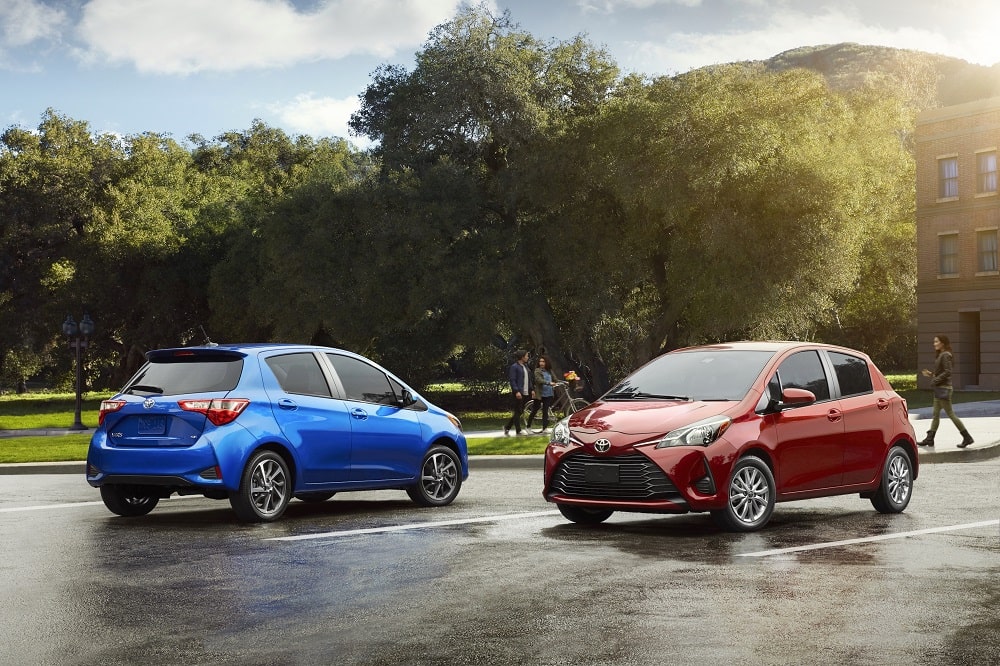 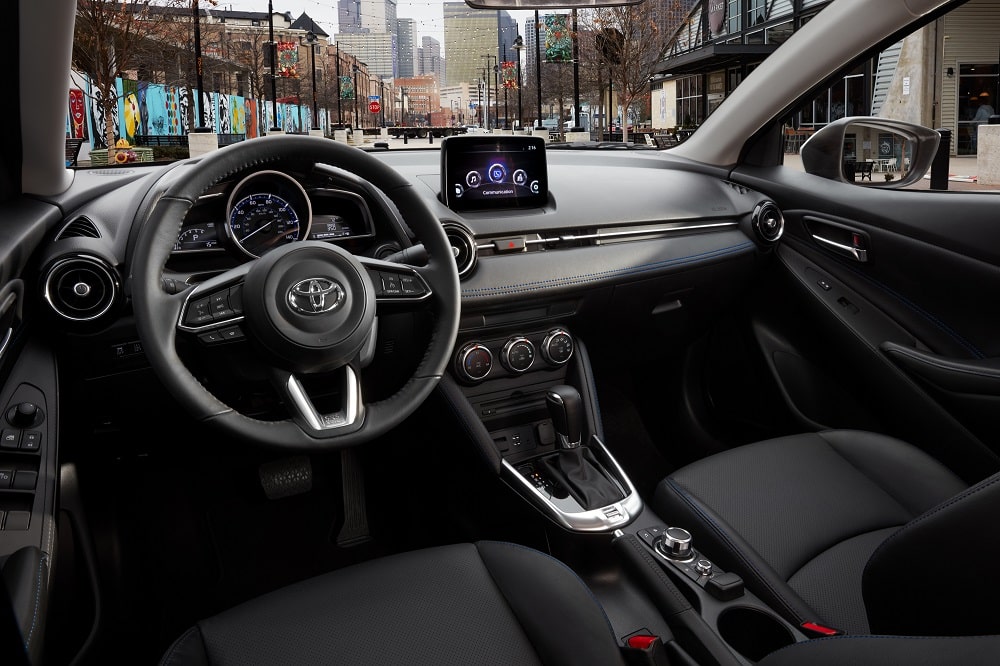 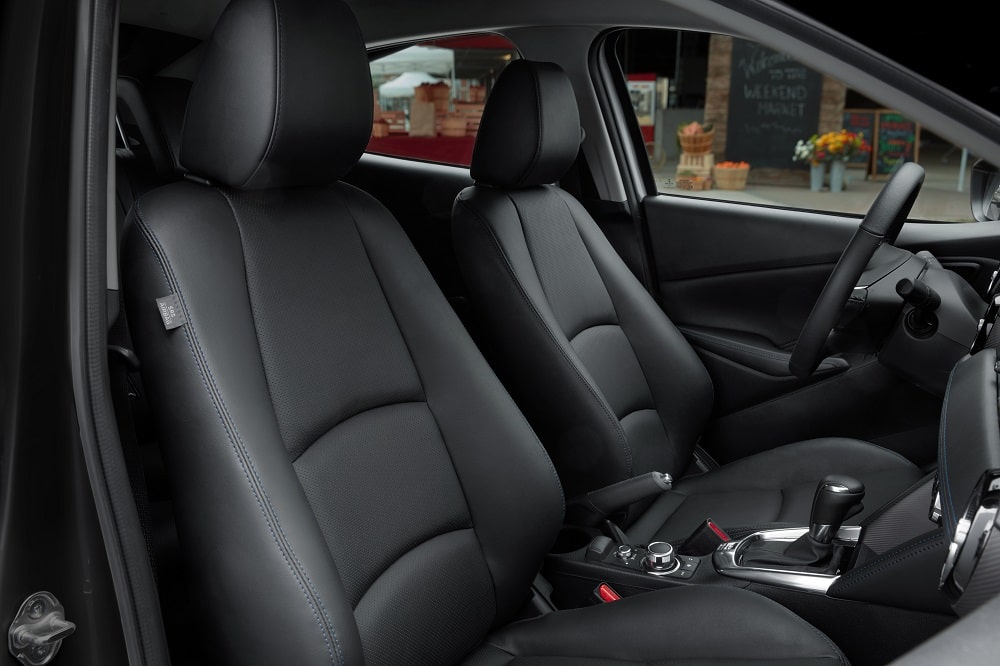 Here’s a tip: Any vehicle lugging more than 20 pounds per horsepower – curb weight divided by horsepower – will be sluggish at best.

The Yaris had a power-to-weight ratio of roughly 23 pounds per horsepower, and acted like it.

Every time I merged onto a fast-moving expressway, I needed to hit its entry ramp with the accelerator pinned to the floor.

In all honesty, I didn’t really mind and besides, the chances of a ticket seemed pretty slight.

I would not have minded another 25 horsepower or maybe a strong tailwind.

Zero to 60 miles per hour – a good measure of the strength of a vehicle’s acceleration – takes about 10 seconds.

To put that into perspective, the Yaris is slower than most modern three-ton pickup trucks or SUVs.

Fortunately, it came equipped with a real six-speed automatic transmission that made it seem a bit quicker -- rather than a rubbery continuously variable transmission.

Still, no one expects sub-$20,000 subcompact sedans to be particularly sporty and yet, the Yaris did have good agility and decent handling thanks to its Mazda underpinnings.

Weighing in at an almost feathery 2,500 pounds, the Yaris dove into corners eagerly and stayed relatively composed at moderate speeds.

Likewise, the little sedan provided a pretty good ride on smooth pavement, though it could get fidgety on the rougher stuff.

Initially, I liked the car’s quick, communicative steering, but in two subsequent trips on freeways, the Yaris wandered some, requiring frequent small corrections on a calm day. 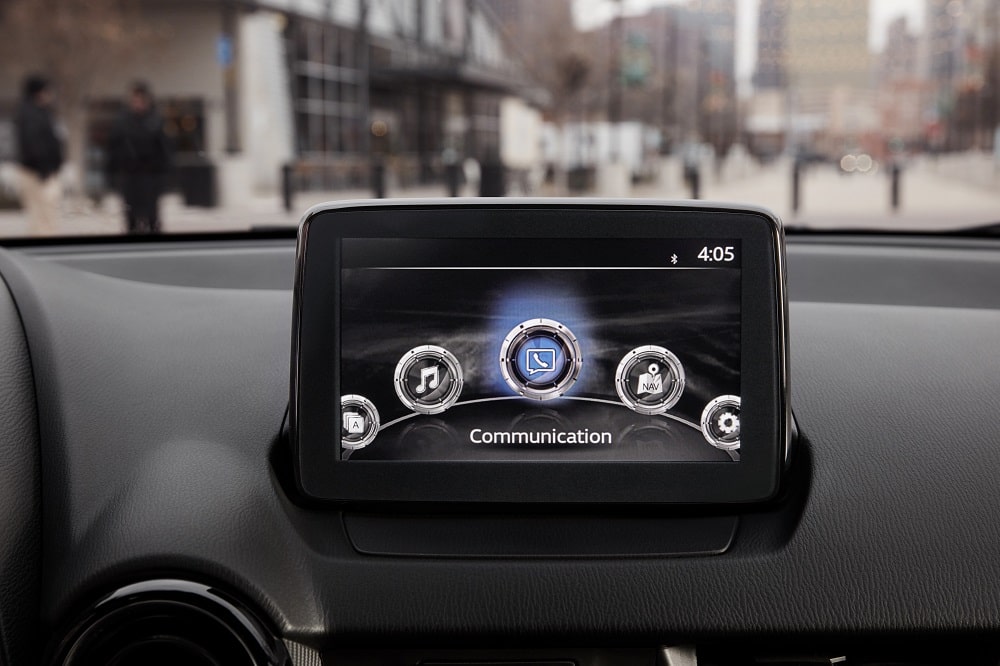 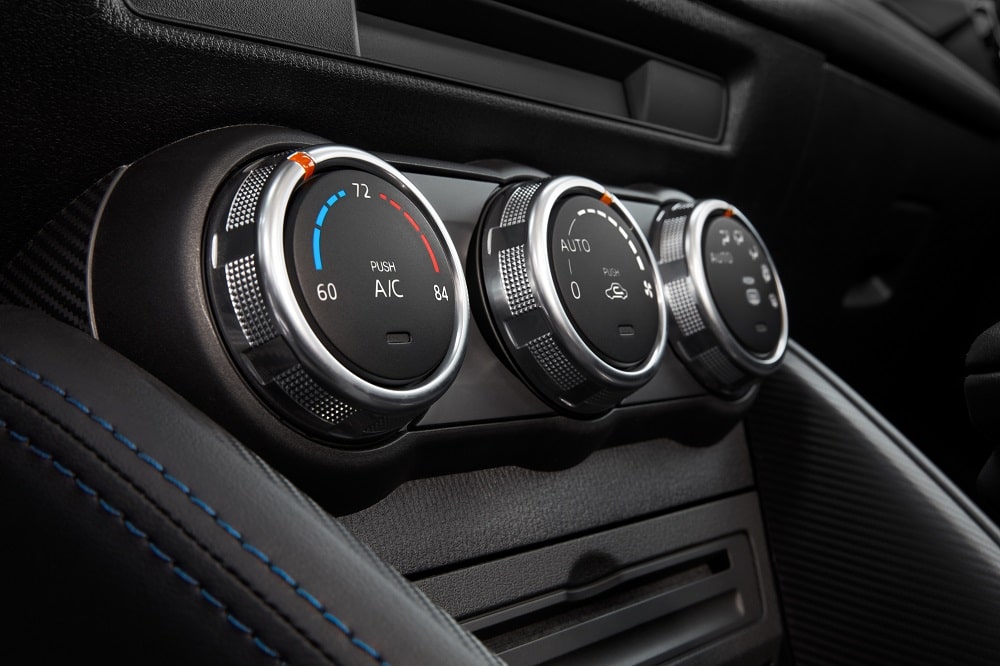 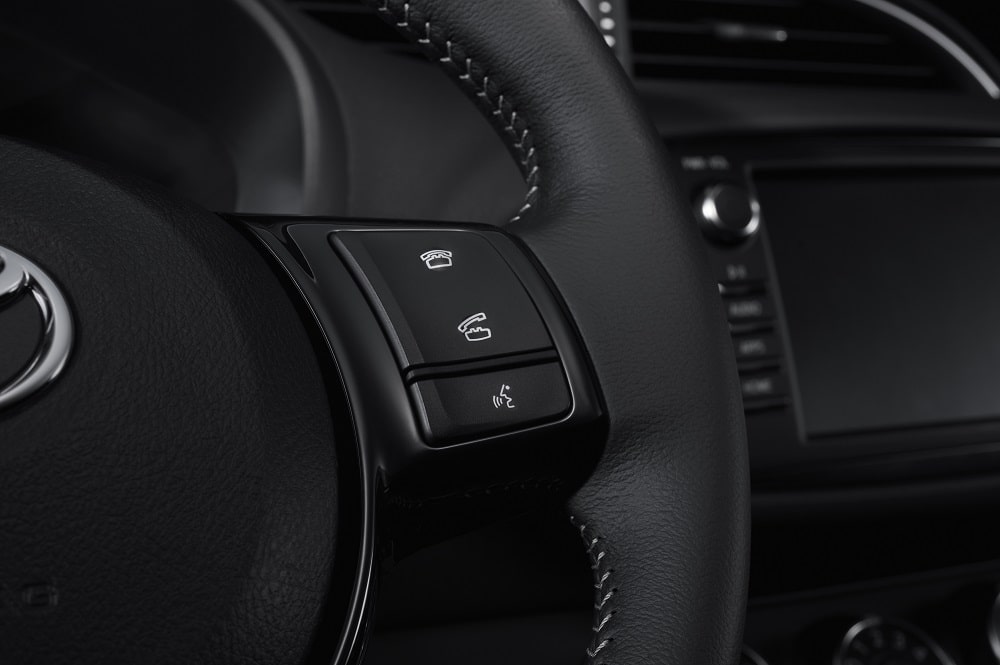 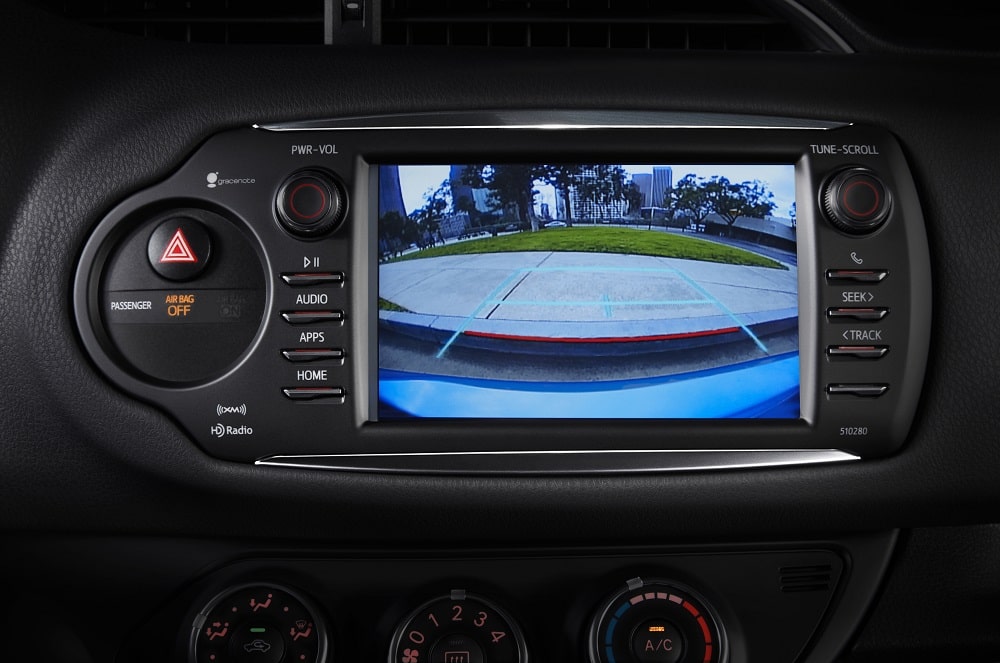 While that was a bit of a surprise considering the car’s Mazda genetics, a bigger one awaited me inside: Its gray interior was pretty good.

A deep black-plastic dashboard eased down onto a mid-dash anchored by a 7-inch touchscreen and round climate-control vents.

The door-panels had plenty of plastic on them, but also featured swoopy gray centers and gray armrests.

Similarly, the Yaris’ gray seats were sectioned with perforated centers and almost looked out of place in the modest sedan.

Like most subcompacts, leg- and head-room in the car was pretty limited.

My cost-conscious Yaris XLE didn’t have a single option, though it did arrive with Apple CarPlay and Android Auto capability, as well as rain-sensing windshield wipers, leatherette interior and dynamic stability control.

Granted, by today’s somewhat lavish standards, that’s not much. But if all you need is reliable, economical transportation, the minimalist Yaris might offer a lot – in measured doses