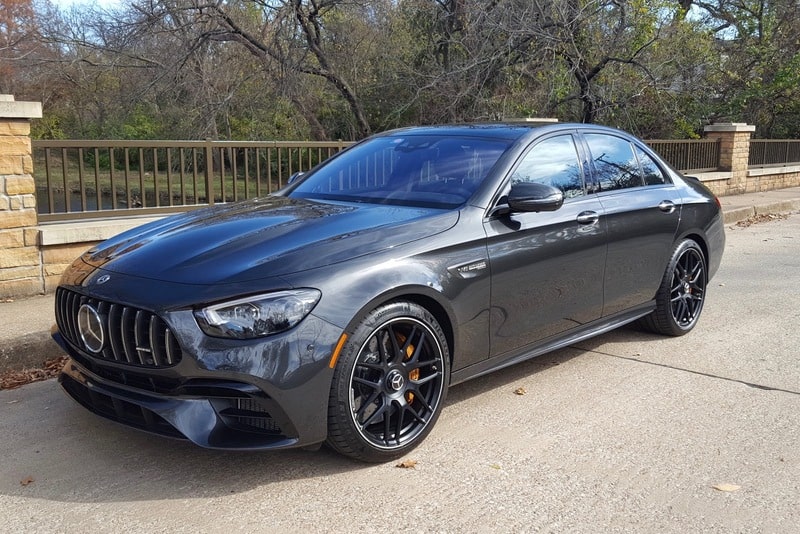 Four doors once meant “for bores.”

Big floaty Impalas and Galaxies and Coronets carried people with calculators on their belts to rousing meetings of the stamp-collectors club.

We would-be cool dudes, meanwhile, drove rumbling coupes and hardtops and convertibles – back before monster, concrete-shredding sedans like the 2021 AMG E 63 S forever put us in our places.

Consider this: The AMG E I had a couple of weeks back relied on a twin-turbocharged 4-liter V-8 capable of ripping to 60 mph in three seconds or less.

Heck, it sometimes takes me that long to blink.

So, here’s the deal: If you have the means to stroke a six-figure check for the AMG E, you get face-wrinkling power, handling, style, cachet and a backseat you can actually fit in.

Welcome to the Era of Everything, kids.

Well-proportioned and purposeful, the muscular mid-size sedan featured a broad AMG grille with 12 vertical strips across it – shining like well-polished teeth.

Sleek headlamps eased back onto fenders with short overhangs, topped by a long hood with crisp character lines in the center.

Although the sedan’s sides were mostly smooth, they bulged a bit with subtle, rounded muscle, while its wheel-arches settled tightly on multi-spoke 20-inch black wheels wrapped with meaty 265-35 tires up front and 295/35s in back.

(Yes, black wheels are truly tiresome, but I won’t argue the point with the lethal E.) 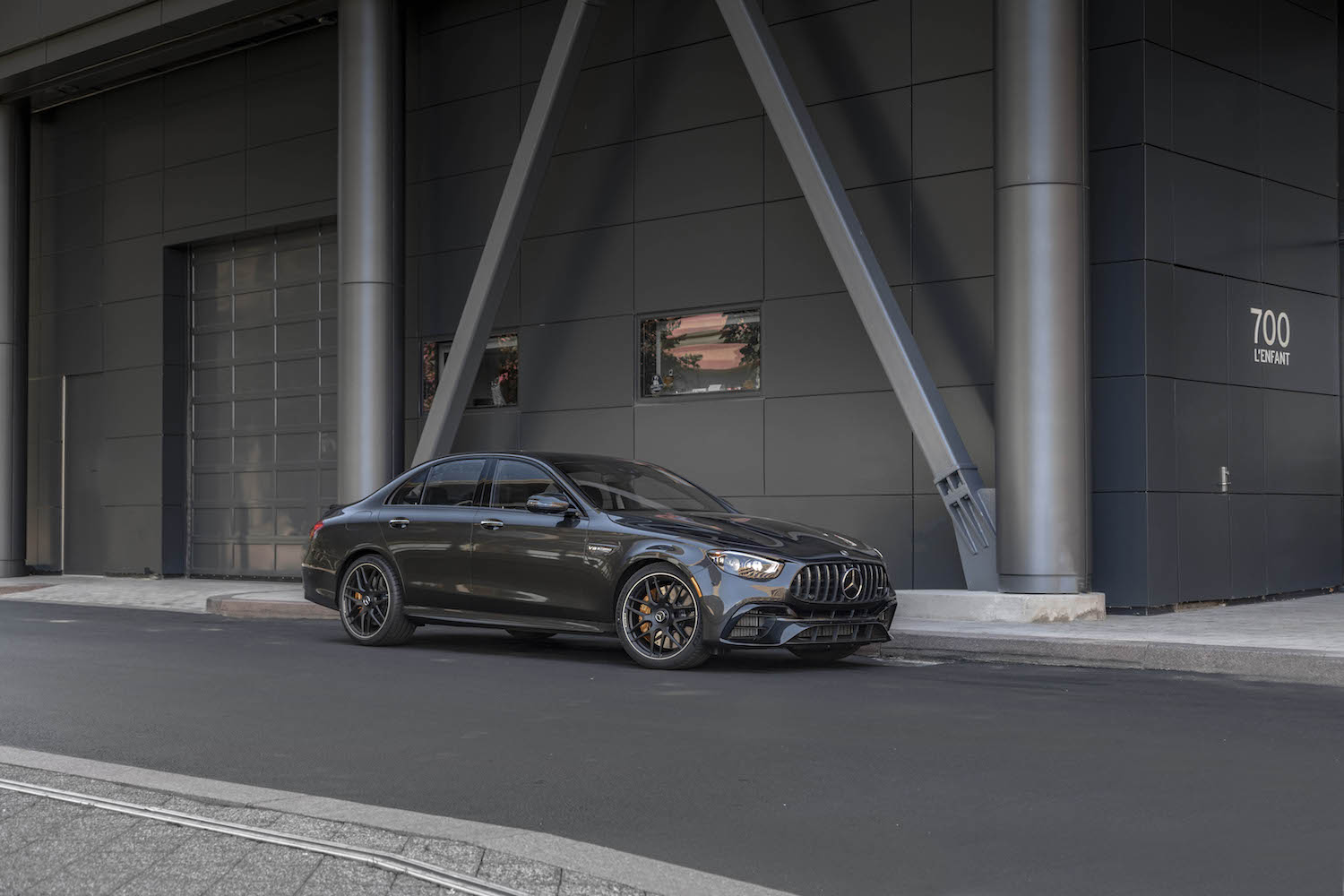 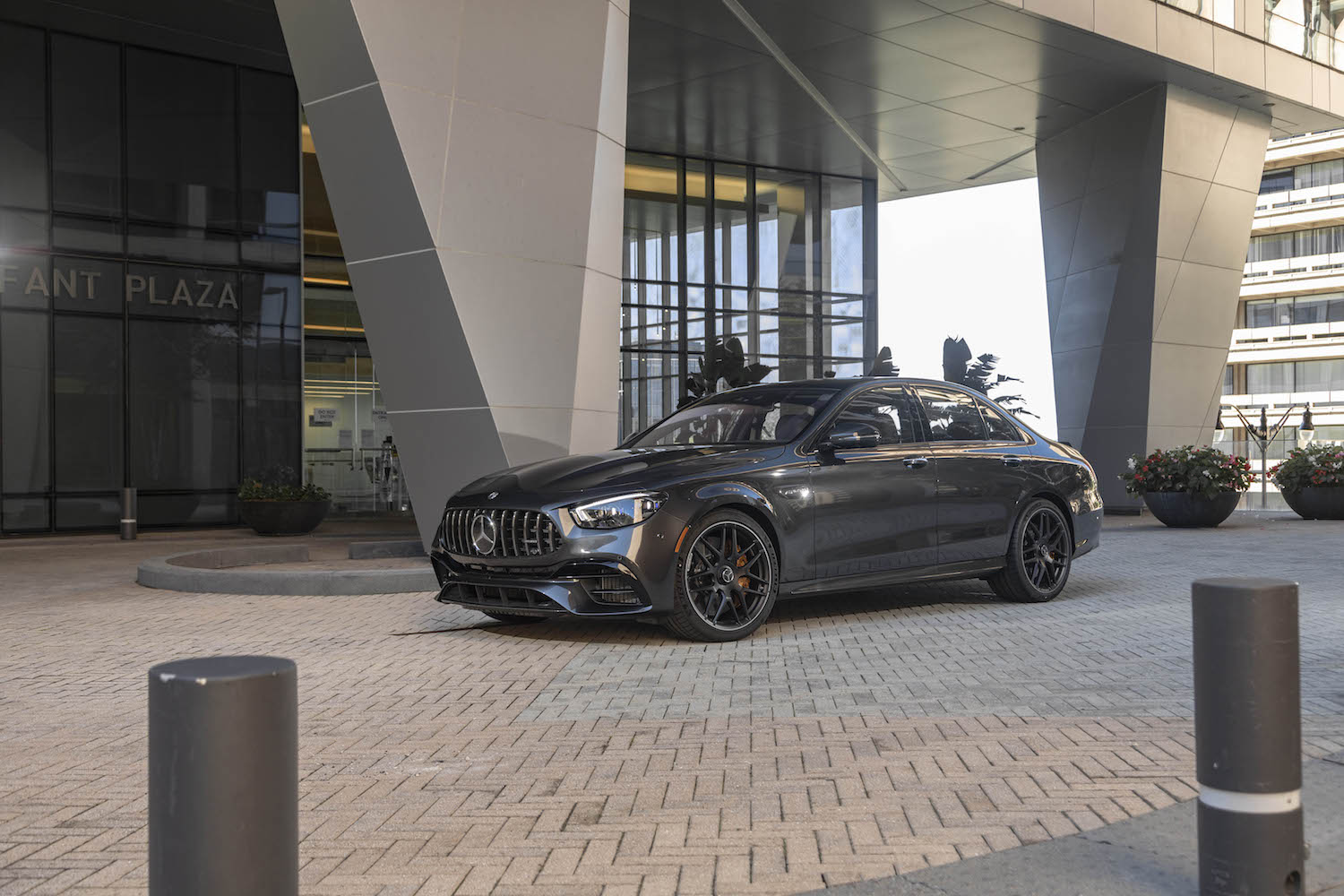 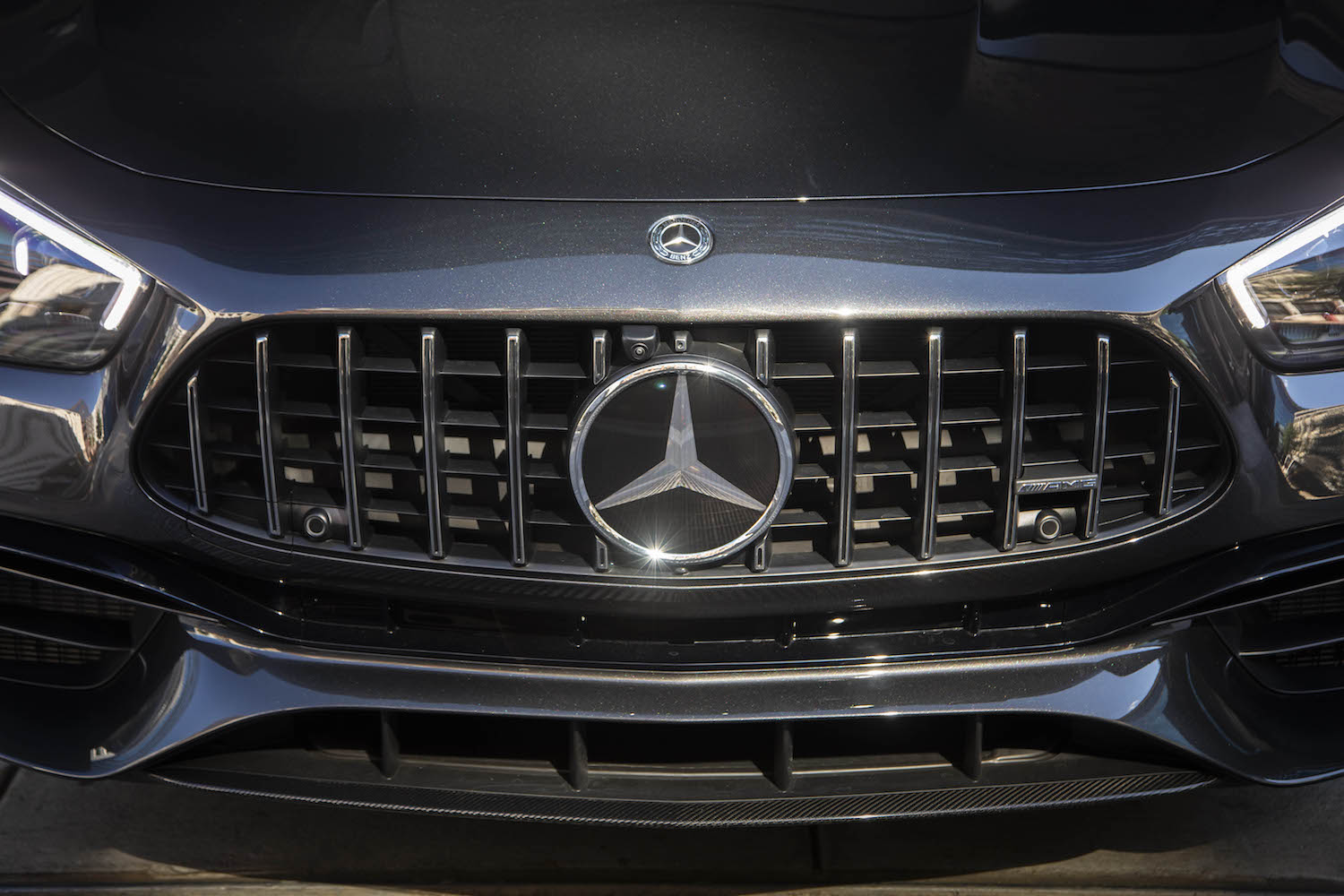 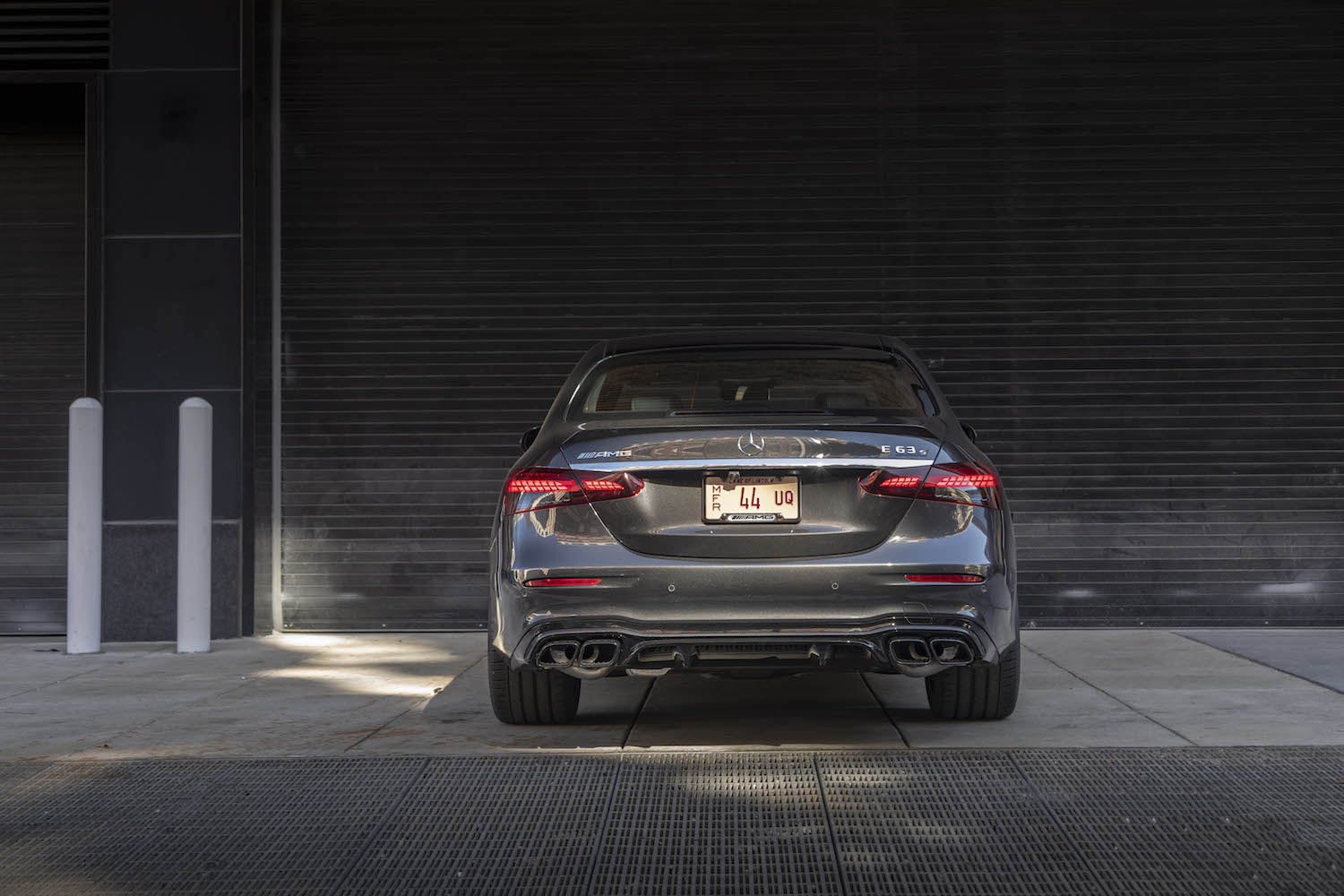 Germans know the sound. With places like Nurburgring and the Autobahn beckoning, fast cars are as much a part of the country’s culture as bratwurst.

The E’s sweet snarl comes from a hand-built 4-liter V-8 with twin turbochargers that pump massive amounts of compression through the all-aluminum engine.

The result: 603 bellowing horsepower gets blasted through a nine-speed automatic and all-wheel-drive system.

Slam the accelerator to the floor and the horizon begins to evaporate – accompanied by an Autobahn bellow.

Numerals on the car’s speedometer spun by so fast that it was hard to keep up, with 60 flashing by officially in 3 seconds, according to Car and Driver.

Sometimes during those little outbursts, the E’s transmission seemed slow to downshift, but its upshifts felt quick and positive.

Stay on the accelerator – which I wouldn’t advise unless you just enjoy spending time with lawyers – and you will see 186 mph.

At lesser speeds, you might see 16 miles per gallon from an engine producing nearly as much horsepower as a NASCAR racer.

Despite its 4,600-pound heft, the E 63 sliced cleanly into curves, holding a line with virtually no body lean with quick, communicative steering.

Probably the biggest surprise was the E 63’s air-based suspension, which was firm but compliant, absorbing rough city streets well.

I’ve grown to mostly appreciate Mercedes’ upscale digital interiors, though they’re being used in so many Benzes now that they seem less distinctive. 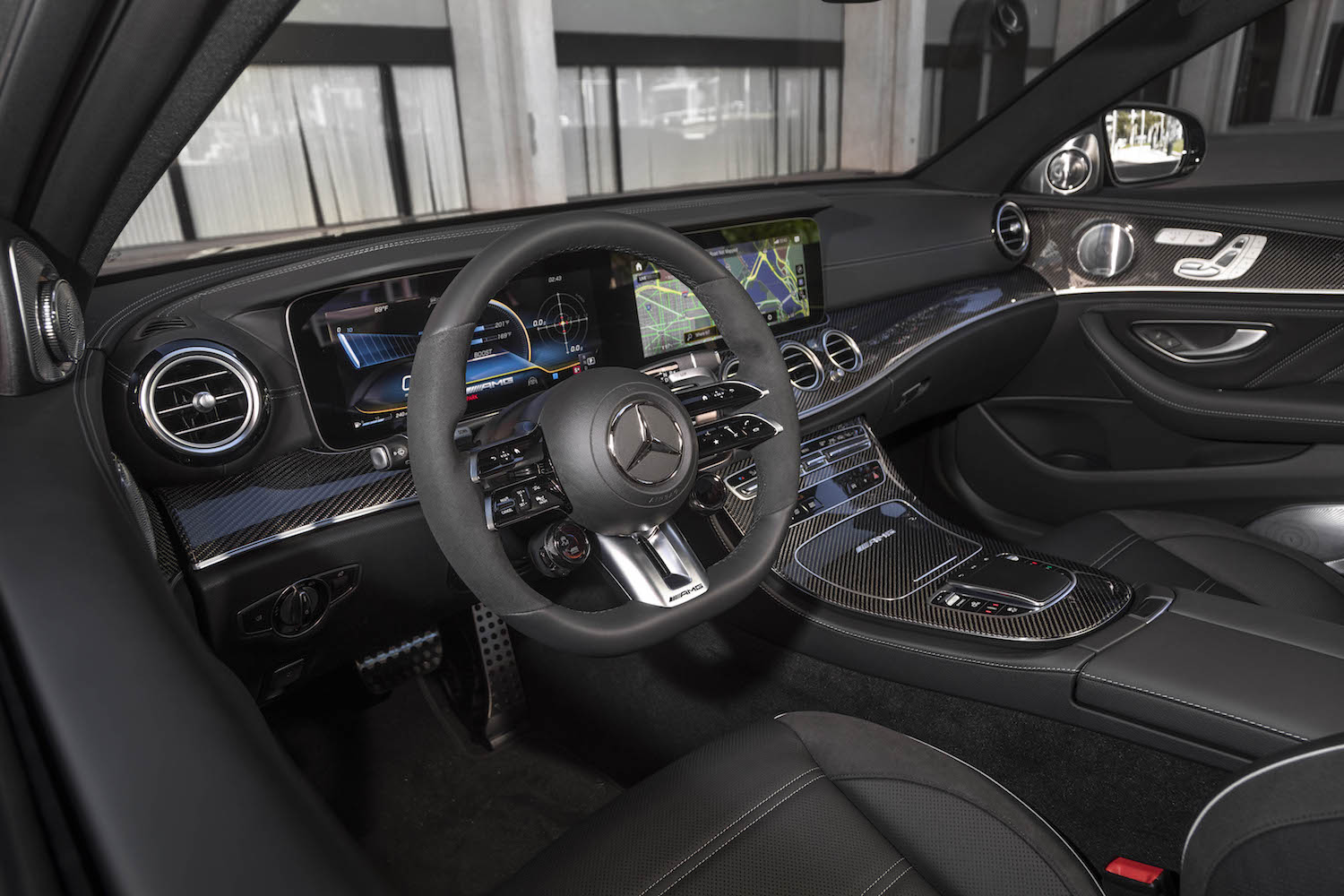 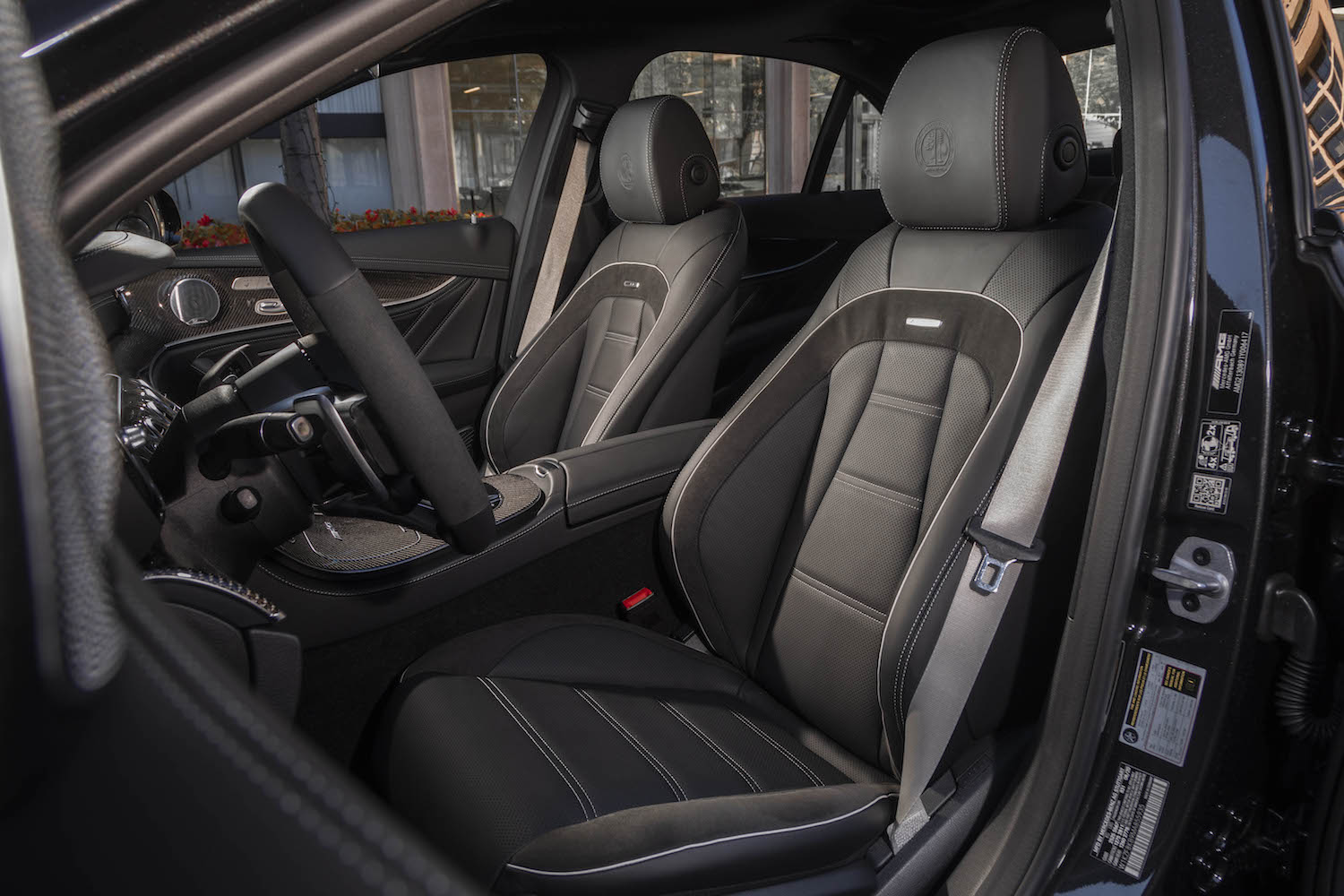 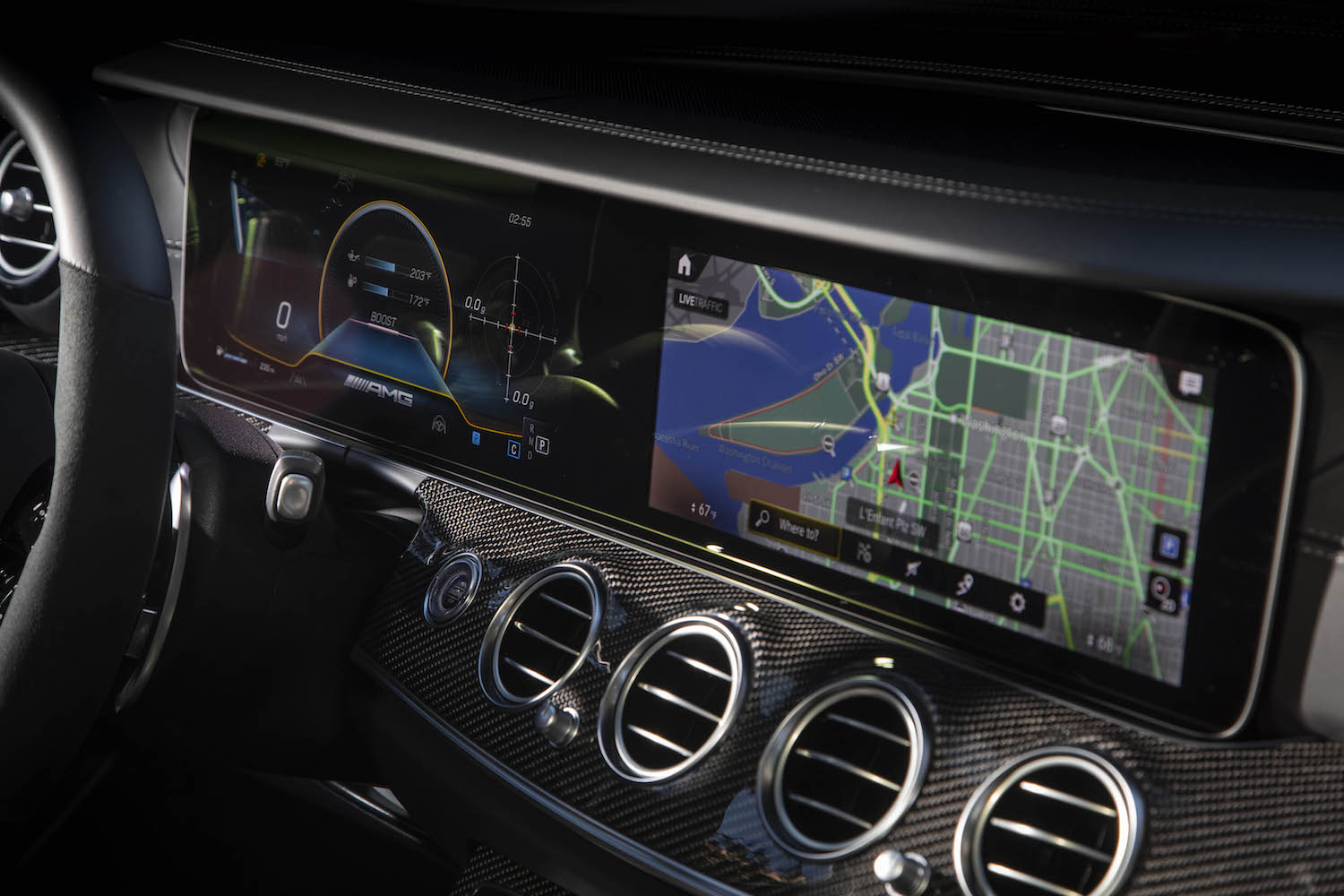 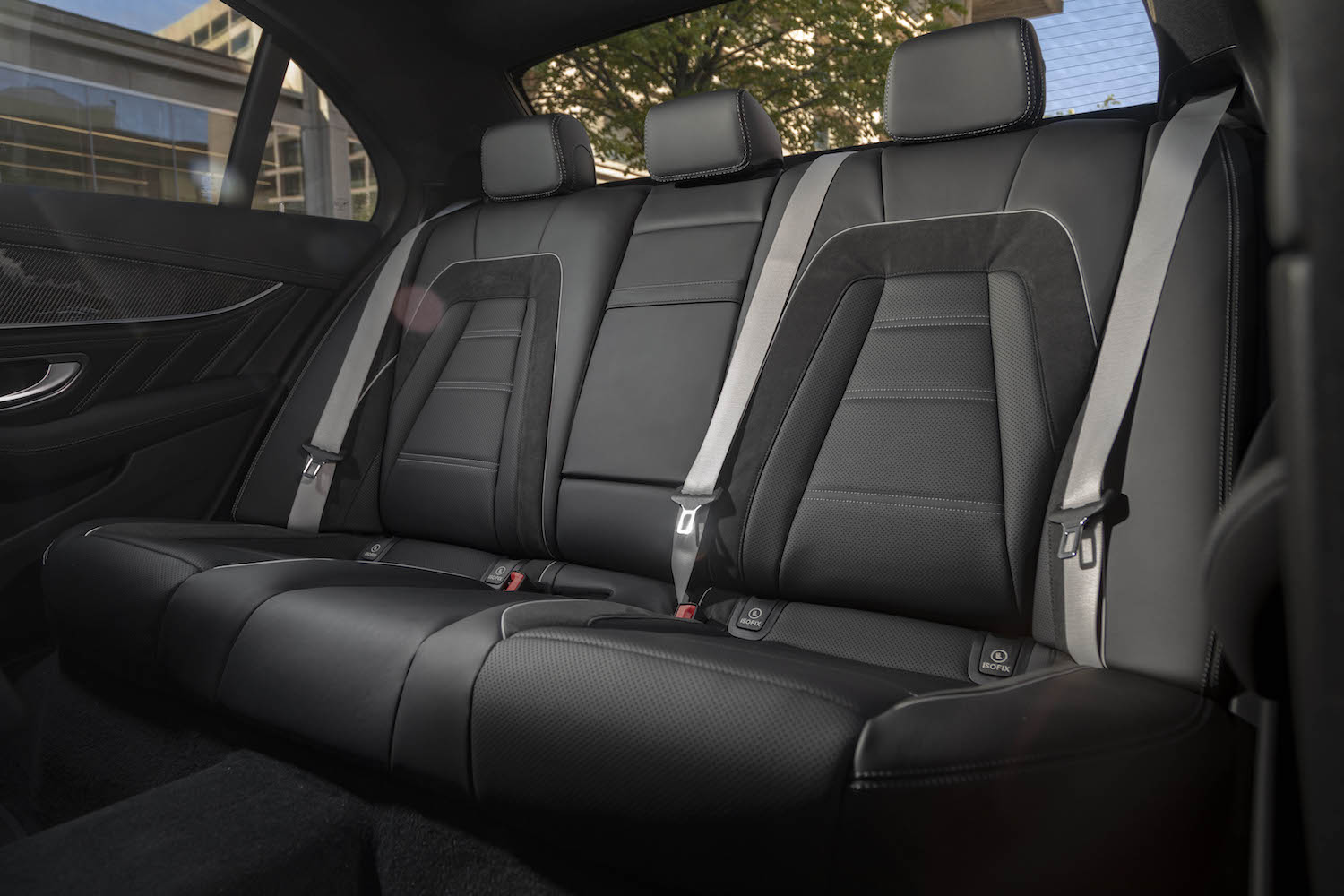 As I have grumbled multiple times in the past, the infotainment side requires the driver to tune the audio system through the touchscreen, adding a terrible, overly sensitive touchpad on the console. Just don’t cough anywhere near it.

Some days, I got so tired of retuning the system that I just turned it off and listened to the engine.

As with all of these M-B interiors, four round climate vents beneath the touchscreen added some retro-style character, while carbon fiber trimmed the dashboard, console and upper door panels.

Real drivers, I think, will find more satisfaction in the car’s black Nappa leather seats whose suede edges will keep them fixed in place.

The car’s seats also offered good leg- and headroom in back.

Like most German luxury cars I’ve driven, the AMG E 63 arrived with a staggering number of options, including carbon-ceramic brakes ($8,950); carbon-fiber trim ($2,950); Burmeister stereo system ($4,550); and a driver-assist package with multiple safety features ($1,950).

Even with all that – even with brakes that cost more than some entire cars -- the E 63 wasn’t perfect. But it might be as close as I’ll get. 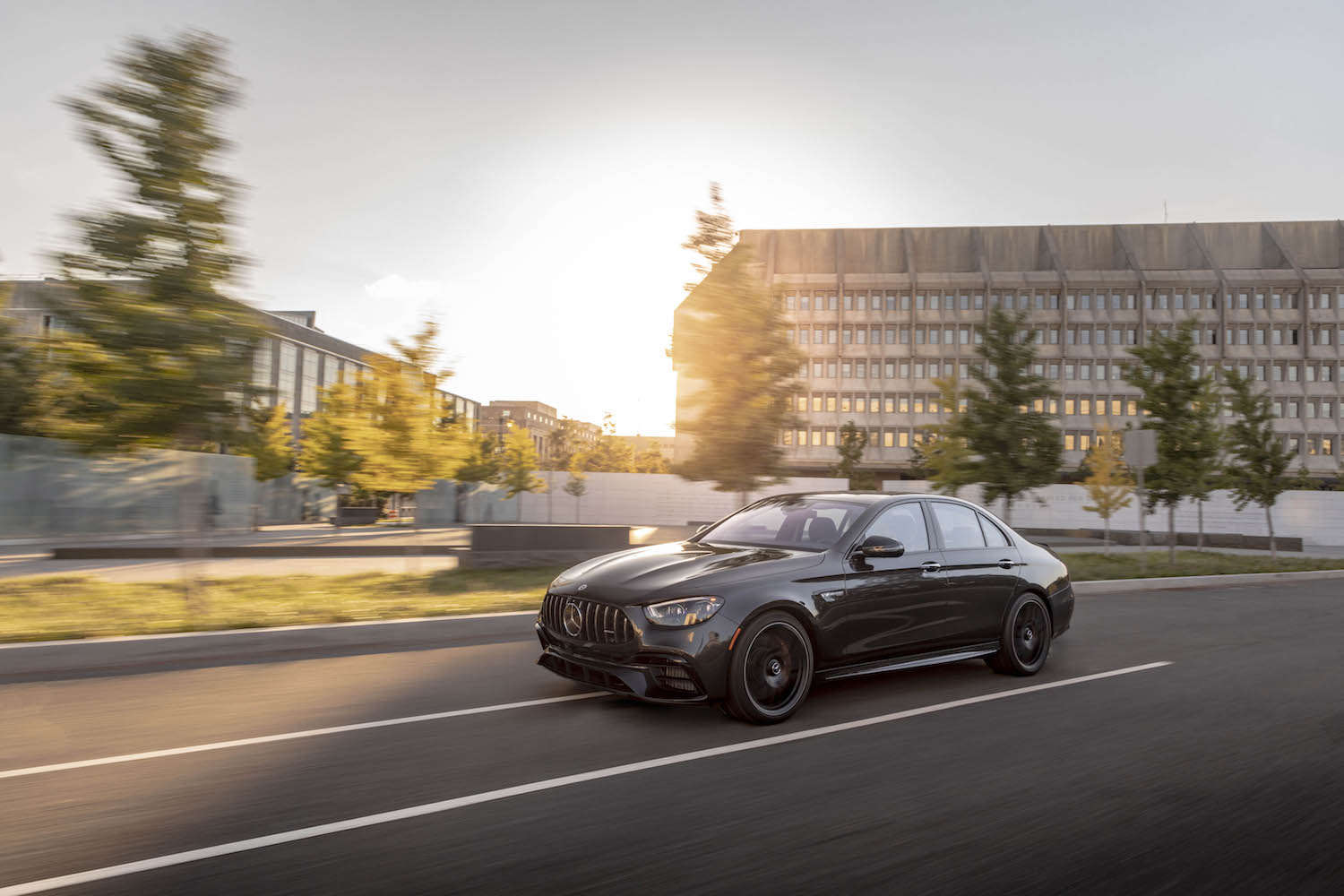 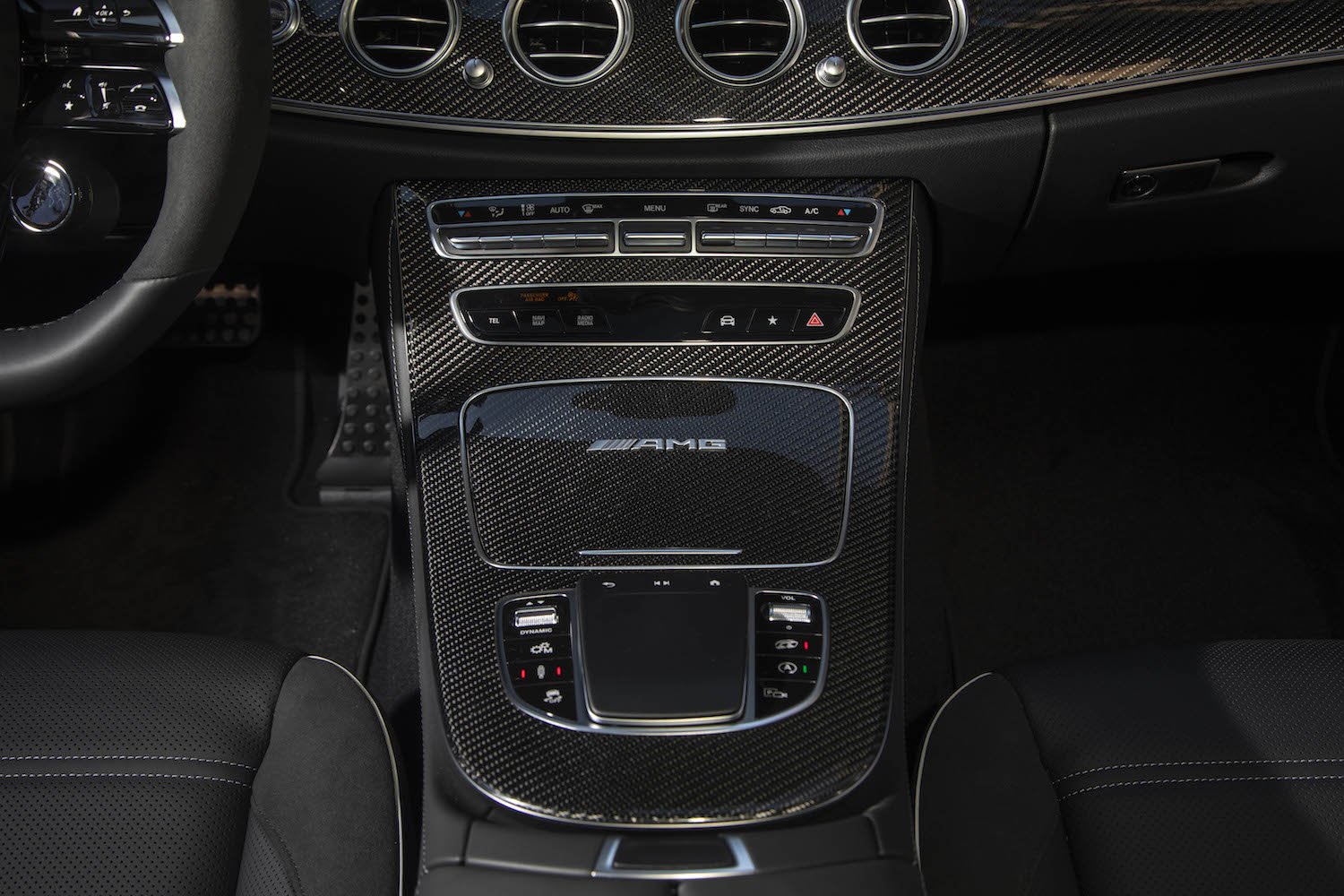 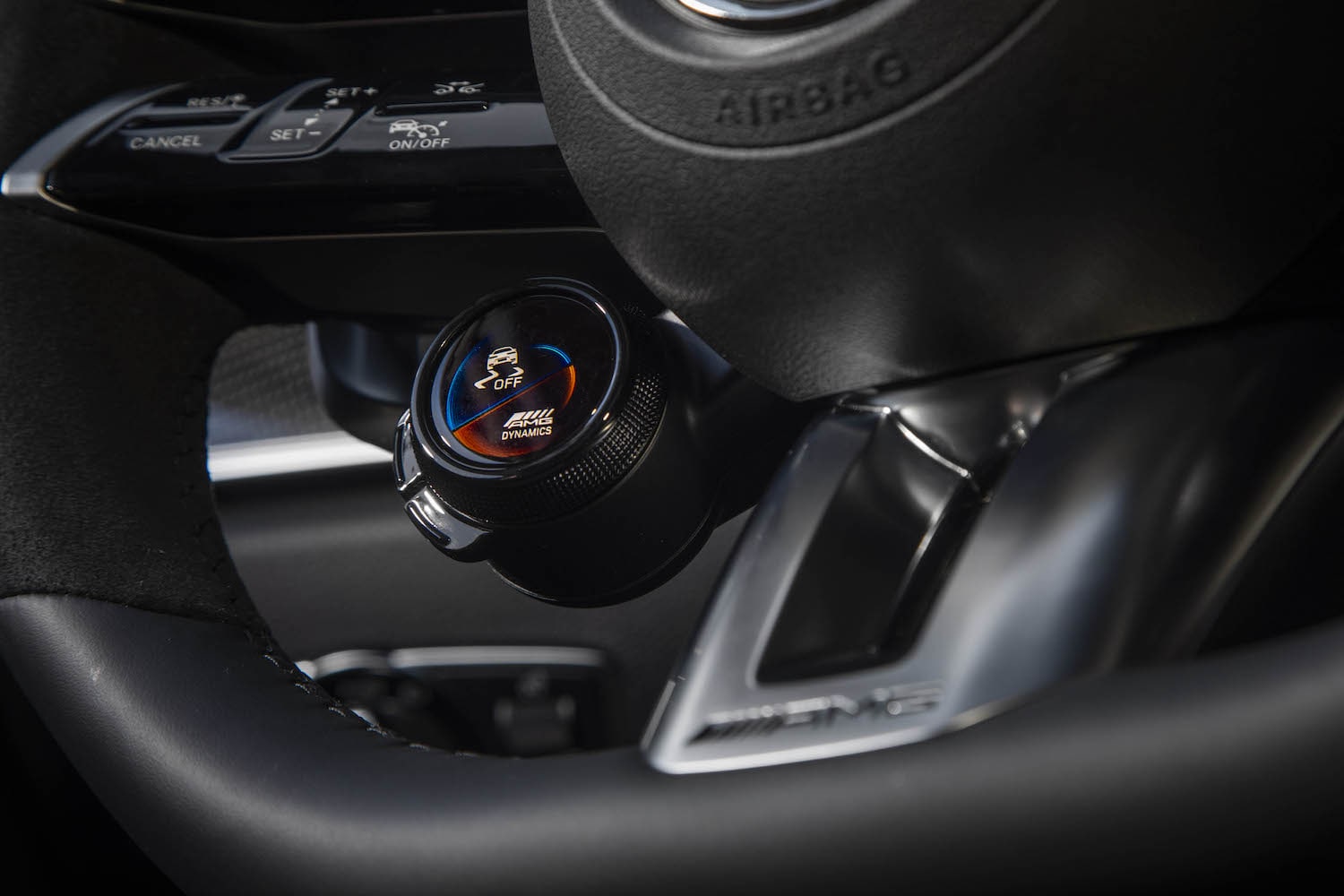 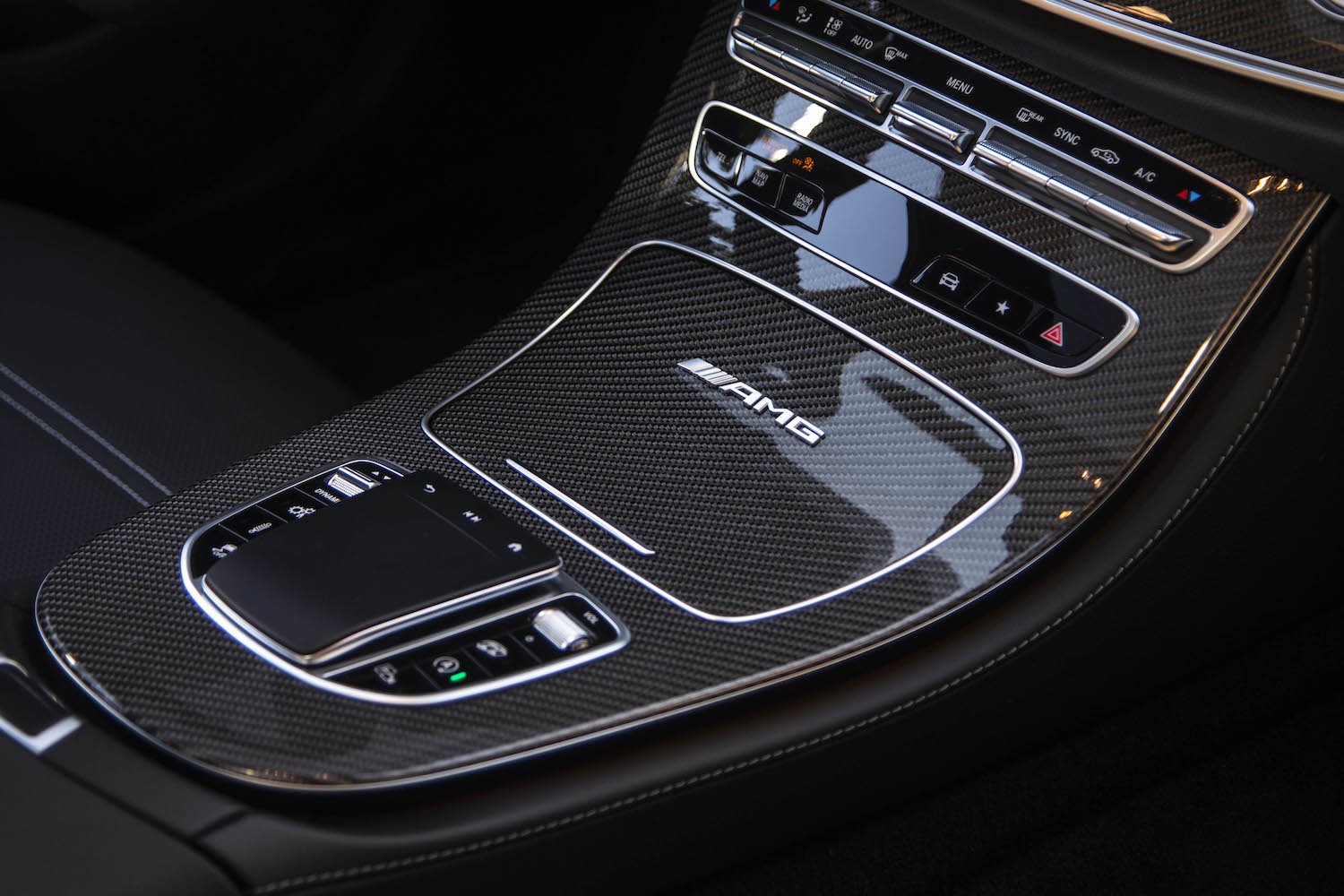 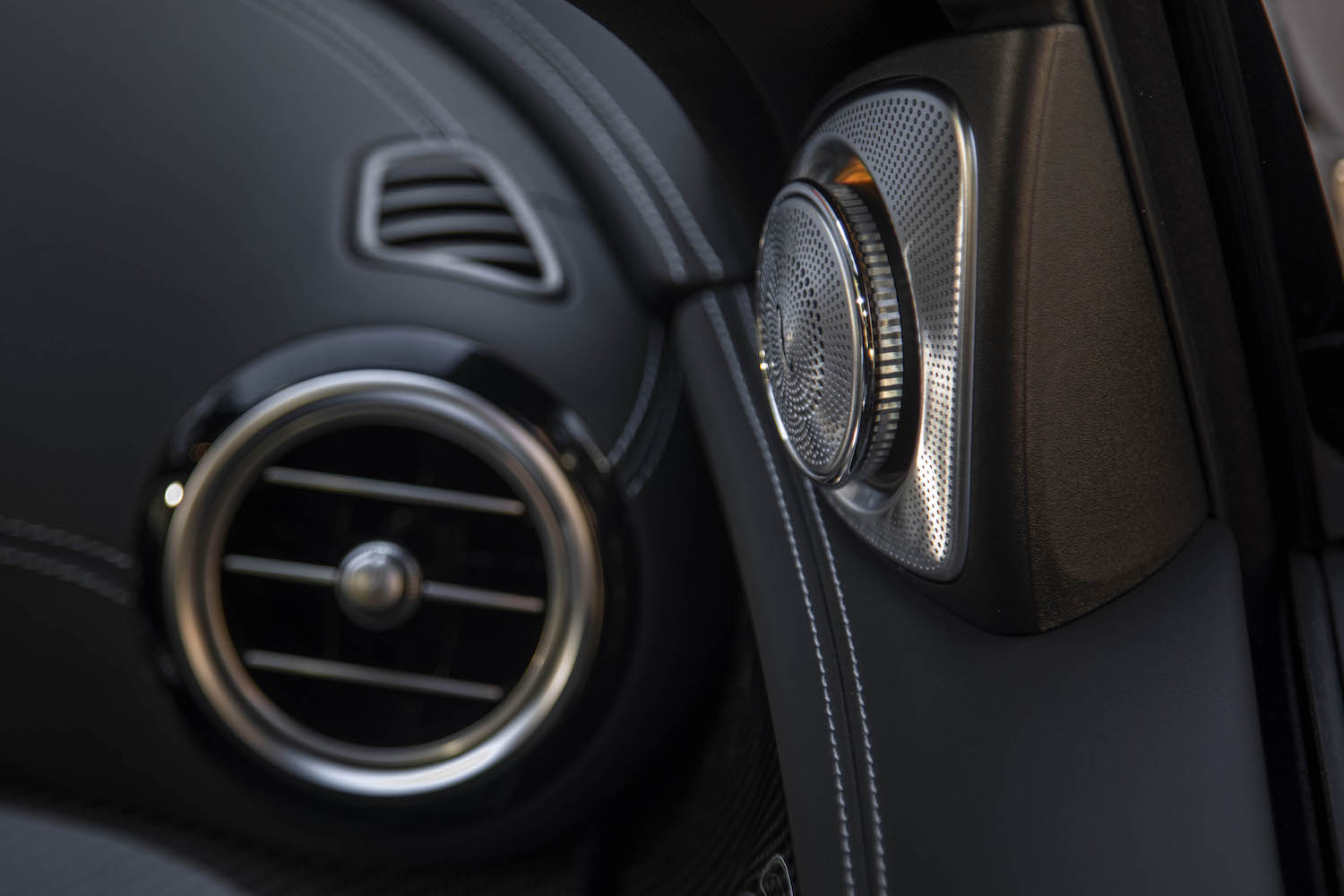