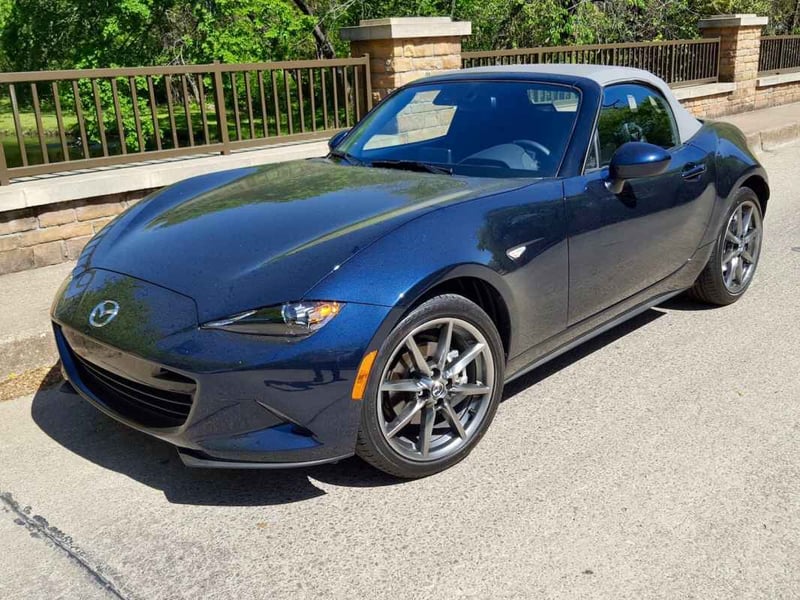 Most of your neighbors will presume you spent time in Alaska, pulling bits of muddy gold from the ground when they see your tiny, high-spirited Mazda Miata.

Or they might peg you for a Vegas poker player who has struggled through a few too many two-pair – or even worse, you could be an itinerant autowriter.

“Eccentric,” they’ll ultimately conclude, figuring that’s why you drive a car too small, too impractical and too, just, indifferent.

What they won’t get, though, is Mazda Miatas are absolute transportation tonic, zesty fun-loving sports-cars that say life doesn’t have to make sense.

I often praised and sometimes cursed the dark metallic-blue 2021 MX-5 Miata Club I had last week, marveling at how gracefully it seized the road and wondering how a cramped, two-seat sportster can continue to be sold in the U.S. with only 8,800 sales last year.

Since the Miata’s introduction in the U.S. 32 years ago, the miniature roadster has remained true to its English sports-car roots – even though it’s a Japanese brand – getting a little larger, more polished and better in every way performance-wise.

But it’s basically still very much a Miata.

Its low, lithe shape has stayed the same, with a front end only a few inches off the ground, a sort-of classically long hood and a grumpy 2-liter, four-cylinder engine.

The top of the Miata’s grille touched me at my knee, while its squinting headlamps looked sleekly contemporary.

Like some of the originals that inspired it, the Miata offered muscular, slightly rounded sides and a cockpit barely big enough for two adults.

It rolled on 205/45 tires wrapped around sporty eight-spoke, 17-inch wheels.

Even now, three decades after the Miata arrived in the U.S., it still weighs less than 2,400 pounds – about half what a well-optioned mid-size sedan clocks in at.

And the lack of weight, plus a much saltier 2-liter four-banger motor, help keep the traditionally agile Miata on its toes.

While not purely fast, the Miata responds with a nice, healthy surge when pushed and reaching quickly for 7,000 rpm with its 181-horsepower to hit 60 mph in a quick 5.7 seconds.

That horsepower, while hardly formidable, is 20 percent higher than five years ago. And the Miata still gets overall fuel economy of 29 miles per gallon.

For those of you old enough to recall English sports-cars from the ‘50s and ‘60s, the Miata will be a special ride.

I’m not particularly fond of the car’s six-speed manual – I find it notchy – but get it right and the Miata is a quick, positive shifter.

It’s even better with curves, its main reason for being. A first-rate steering system allows drivers to turn quickly into corners with the sort of balance and grip that can make good drivers look great.

How good? I’ve watched serious drivers at a track park their Vipers for a lap or two and climb into Miatas to get a clearer view of the vagaries in a track.

But, as you might expect, the Miata doesn’t offer much compromise between track and street, providing a noisy, unsettled ride most of the time.

Occupy yourself by admiring the car’s sleek, tight-fitting convertible top – the one on my Miata was gray – which lowers by hand with a single, center-mounted lever.

Likewise, the black interior in the Miata was elegantly simple.

The upper dashboard in mine, for example, rolled down to a slightly protruding mid-dash whose main function seemed to be to provide space for a fairly small digital screen.

You will need it to tune the car’s stereo, a real irritation in my opinion. But, as I may have mentioned, the Miata looks small on the outside and even more compact inside.

It was nicely detailed, though, for a miniature modern car with a window sticker of $31,700. The tops of my car’s door panels were painted the same metallic dark blue as its exterior, while the main door panels were padded and stitched in black.

Three simple gauges were housed in the instrument panel: a tachometer, speedometer and other, smaller gauges crucial to the car’s operation.

The seats followed that lead, offering supportive bolsters and perforated centers that keep you in place.

Space inside is minimal, so I often looked for reasons to put the top down – and rarely struggled to find them.

My Miata arrived with one option – the gray convertible top, $200.

It’s a unique mix of semi old-world charm on the outside and modern components underneath.

Still, is it enough to keep the Miata alive, particularly since its sales peaked at nearly 36,000 in 1990? I sure hope so.