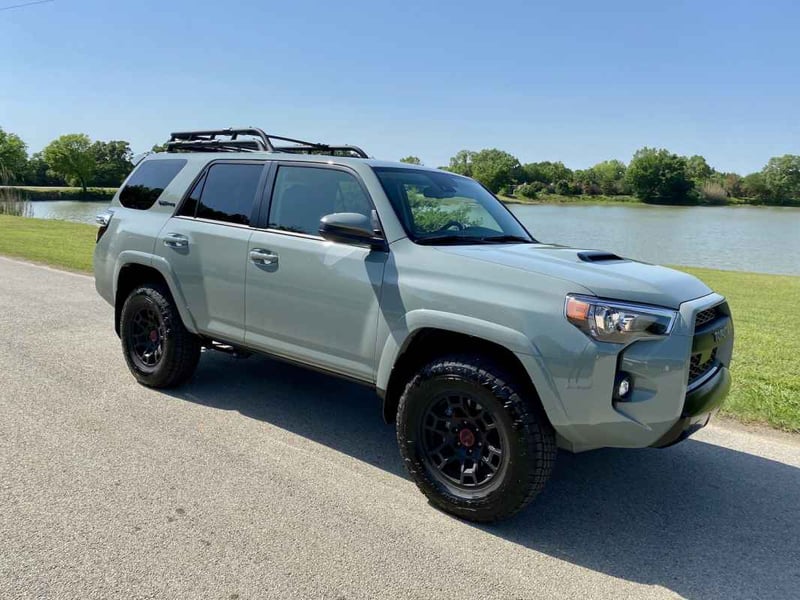 Do I need an off-road beast with enough ground clearance to warrant a step-stool for my 75+ something mom to climb in? No. But after driving the Toyota 4Runner TRD Pro, I find myself thinking it sure would be cool to have one though.  (And once she lifted herself in using the awesome grab handles, my mom enjoyed the ride and roominess, too.)

The fifth-generation 4Runner, around since 2010, is an old-school SUV with a cult following and it’s easy to see why. No matter that it may not have all the tech features of more recently updated SUVS. When you’re behind the wheel, you really don’t care. At least I didn’t. It’s just a great-riding body-on-frame SUV that is immensely likeable. (Not to mention talk about resale value!) Toyota’s sold 37,263 of them so far through the first quarter of the year. There’s a new Trail Edition for 2021 but I’m driving the TRD PRO.

Under the hood, you find a 4.0-liter V6 that delivers 270-horsepower and 278 lb-ft of torque. It’s mated to a 5-speed automatic transmission and the TRD Pro is equipped with a part-time 4WD system with Active Traction Control. (The Limited model is equipped with full-time AWD.) As you’d expect, fuel economy isn’t great at 17 mpg combined.

My test model is in a new-for-2021 TRD PRO-exclusive Lunar Rock hue. The TRD Pro rides on new 17-inch TRD Pro Flow-Form alloy wheels, fitted with Nitto Terra Glapper Tires. Toyota says these are stronger and lighter than previous wheels. Up front you see a large TOYOTA and TRD Pro Badge stamped on the front.  Along with new for 2021 LED headlights (all grades) the TRP Pro has LED high beams and high performance LED Rigid Industries fog lights. Other features are side rocker panels, a hood scoop, and a rear spoiler. You can’t miss the exclusive black roof basket on top.

The two-row cabin compliments the entire 4RUNNER rugged cred perfectly with its black interior with silver trim. Its SofTex-Trimmed seats feature TRD Pro logos on the headrests.  The driver’s seat is 8-way power adjustable. The seats lean to the more rugged, firmer side with fairly flat seat cushions as opposed to luxurious and cushiony.

Second-row passengers get their own drop down center console and A/C vents.

The 4Runner is of course heavy on utility. The second row seats fold flat without removing the headrests. You have a lot of cargo space with the rear seat up-- there is 46.3 cubic-feet of space when equipped with a sliding rear cargo pull-out “deck”. It can support up to 440 pounds, too. A power-sliding liftgate window is a great feature. Rugged TRD Pro All-weather floor liners come in handy even when you’re not off-roading. It also has a standard 120V outlet and two 12Vs.

I didn’t take the TRD Pro off-roading but instead kept to city and highway driving.  The accleration matched the V6 engine and it was enjoyable to drive, with a good steering feel. Making a U-turn was a little challenging, but doable. With its 9.6-inches of ground clearance, I loved the ride height that makes you king of the road. I enjoyed its truck-like body-on-frame ride and the suspension. The cabin also seems quieter than some of Toyota’s sedans. Perhaps because of the ground clearance and its underbody.

For the adventure-minded, you can adjust your drive modes for various types of trail use with the Multi-Terrain select system, including a mogul mode for very uneven terrain.

Toyota hasn’t felt the need to do an aggressive redesign of the 4RUNNER for quite some time and it’s easy to see why. It remains alluring just as it is.  Some powertrain improvements could however improve its fuel efficiency.