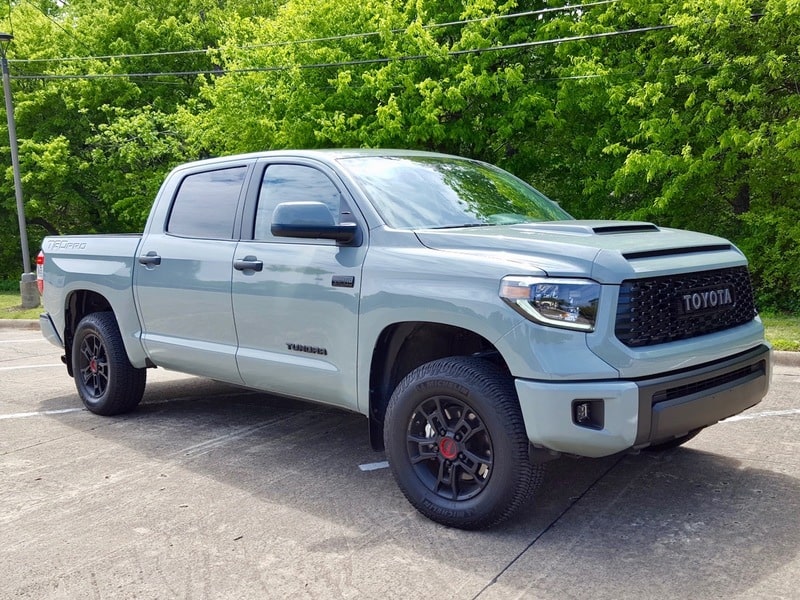 Pickups just don’t pack the grit and broken gravel they once did.

Oh, sure, they will tow your garage while transporting you in leather, heating and cooling your bottom and then backing themselves into parking spaces.

But most feel now like big, stiff-riding cars rather than clanging, banging, bounce-across-the-range trucks – the loud, scuffed-up kind your grandpa drove.

Oddly, though, if you miss those solid-steel three-ton basic-beasts, you can still find one at a…Toyota dealership.

As the oldest pickup in the full-size truck segment, the giant 2021 Toyota Tundra TRD Pro remains a stout, hard-core truck designed to challenge the off-roads and on-roads of Modern America.

I kind of liked it, even though it clearly was not the best giant pick-up you can buy.

In fact, if you remember when Toyota moved Tundra production to San Antonio in 2009, the new second-gen Truck could be ordered with a 5.7-liter V-8 producing 381 horsepower – the same as today.

Toyota will finally get around to upgrading its old soldier in 2022, even replacing its throaty V-8 engine with a 3.4-liter V-6 from the Lexus.

The greenish-gray Tundra I had last week -- a pickup so tall (77.2 inches) I literally had to pull myself into the cabin with the steering wheel – has been around long enough to feel as familiar as a neighbor in dusty jeans.

Unlike most Toyotas, the Tundra sported a rather conventional blacked-out rectangular grille flanked by sleek headlamps. 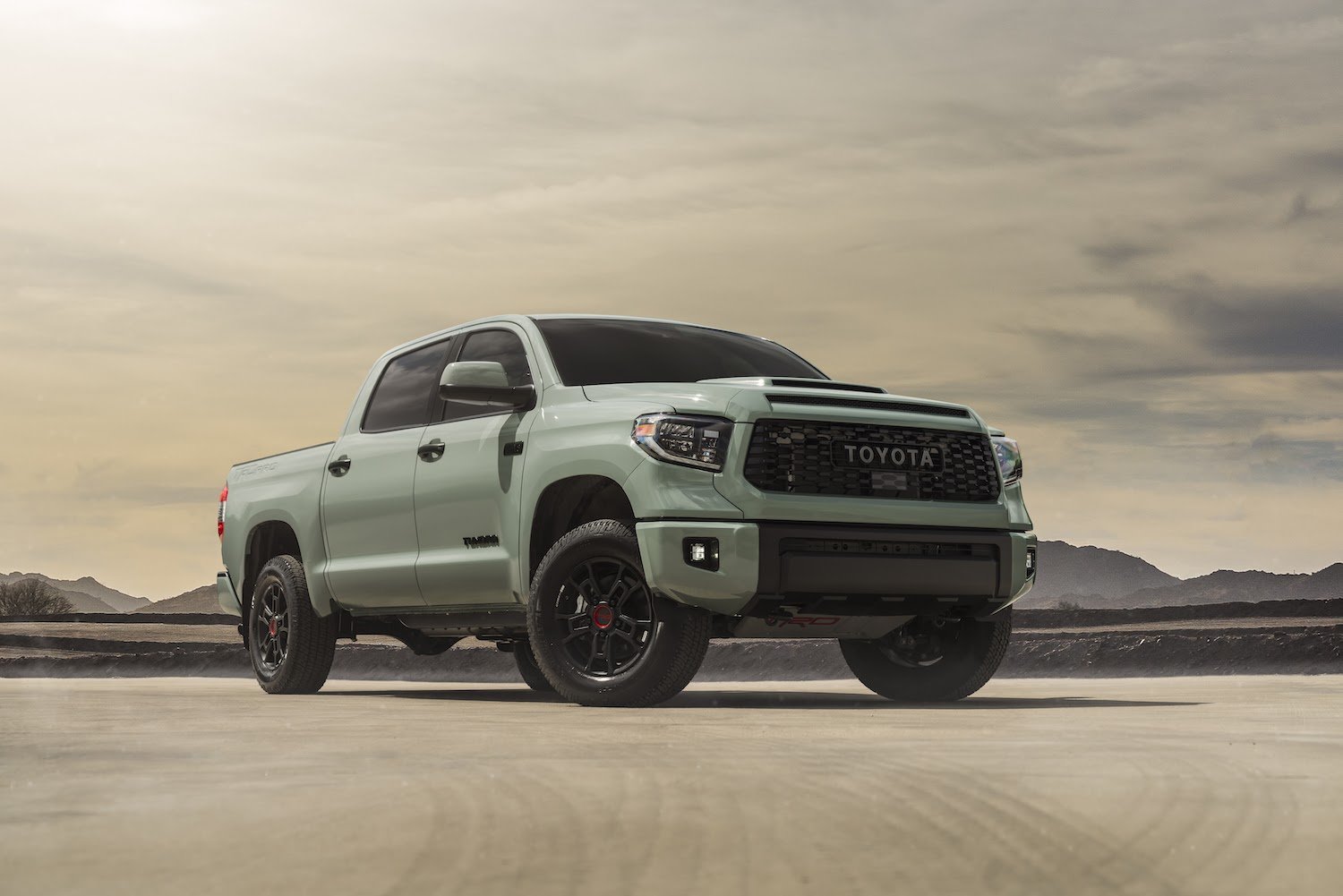 A thin, kind of attractive “vent” topped the truck’s raised hood, which also got a second smaller vent on top of that as part of the truck’s TRD jewelry.

Though the sides were mostly smooth, they featured slightly flared wheel-wells and off-road-inspired 275/65 “mudder” tires on 17-inch wheels.

While the truck looked and sounded like some old towering off-roader, I didn’t head for the mud. I was more concerned about living with the truck on-road, where most of the trucks will live.

And I can report that besides a rough ride, the TRD Tundra sits so high off the ground, you will need 32-inch legs at least or a good stool. Seriously.

Although not new, the 5.7-liter V-8 in the Tundra still made solid horsepower and torque – and consumed the most gas in the Tundra’s segment at 13 miles per gallon.

Likewise, though not the fastest pickup in the segment, the Tundra bellowed convincingly under acceleration, still able to knock off 60 mph in a respectable, relatively quick 6.3 seconds, according to Car and Driver.

As a heavy-duty, off-road style of truck, the stiff-riding, beast bounced frequently, often attacking smooth surfaces as aggressively as it did the off-road.

It wasn’t terrible, but it could get tiresome.

We might not proclaim it the roughest big pickup in the segment, but we’d probably give it some thought.

Still, the truck’s steering felt well-weighted and precise, and it bristled with pure old-school, square-jawed strength and endurance.

Let’s just say the three-ton TRD Tundra clears its own paths through the woods.

Like the exterior, the Crewmax interior of the Tundra made no pretense of luxury, providing spacious leather seating for five in a black cabin of plastic.

That bothered me less than the obvious age of the interior design. 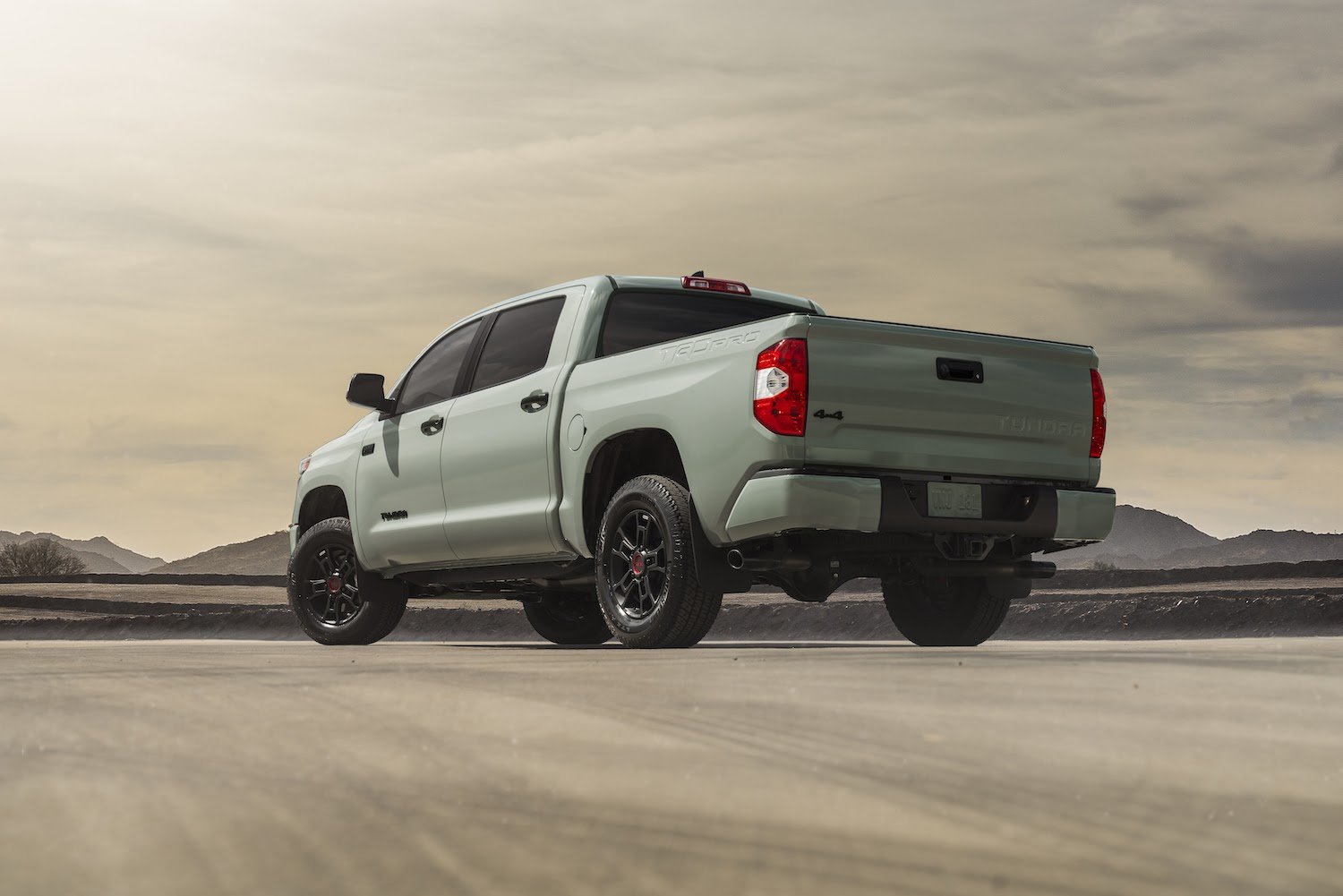 The upper dashboard, for example, looked flatter than Dallas after a trip to Colorado, rolling down onto a mid-dash heavy in silver plastic trim.

Its center-piece was an 8-inch touchscreen done in black. Although the tops of the door-panels were cast in semi-pliable plastic, just about everything else around it was milk-jug plastic – and durable, I’m sure.

Fortunately, the seats were stitched in sectioned, semi-smooth leather that still fit the interior’s basic – and simple -- functions.

The four-wheel-drive knob, for instance, twisted from 2WD to 4, and was ready to go. If you needed to change the stereo setting, you reached for a knob.

As you might expect, the leg- and head-room in the back-seat won’t put anyone to sleep, but offered plenty of space.

At this point, the Tundra is not the sort of new truck I would recommend – even if it were better.

But Toyota trucks – like Toyota cars and crossovers – are strong vehicles built to last decades, and I would consider buying one for occasional business-work.

I just don’t want to have to drive it on Saturday.