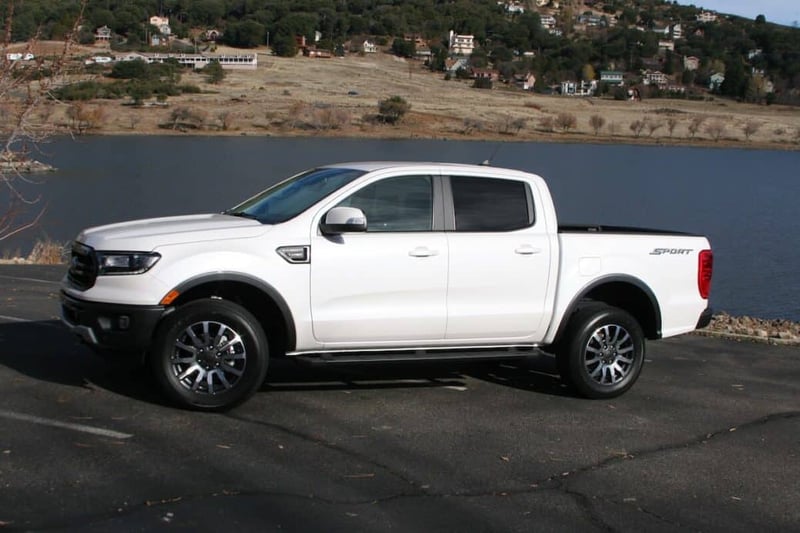 Ford Rangers are popping out of the woodwork these days – as in I can’t go a day without spotting several of the 1983-2012 model year pickups that last rolled off the line in 2011. But it’s time for the old to make way for the new – and by that we mean hello all-new 2019 Ranger. Yes, if you didn’t know it already, a brighter, shinier, more adventure-some Ranger is about to hit the road in January. This one will most certainly be hard to miss.

The new Ranger is making its return after a lengthy hiatus and in large part at the request of Ford customers, according to Ranger Marketing Manager Chad Callander. Eight years later, it exudes a refined design that just wasn’t there previously. That’s in large part because the new Ranger is not so much solely a workhorse pickup,  but it’s also designed for urban, modern lifestyles and people who like more than an occasional adventure. Plus, being nearly a decade later, its design is decidedly and expectedly more modern.

In regards to looks, sharp is a word that kept coming to mind during my recent Ford-sponsored media drive in San Diego. A lineup of Rangers outside our hotel wore vivid splashes of color ranging from Lightning Blue to Saber (orange) to Hot Pepper Red. Some had Chrome appearance packages, other models sported magnetic-painted black grilles and bumpers, and FX4s wore serious looking steel bash plates and bumpers. The Ranger sports a single rear exhaust — and the XLT and Lariat come with LED headlights and taillights, while the XL is stuck with halogens.

On the media drive,  I partnered up with two fellow journalists along with Ranger Marketing Manager Chad Callander for a lengthy ride both behind the wheel and as a passenger. Our test model was a 4X2 SuperCrew White Platinum ($595) Lariat equipped with the Sport Appearance package.  (Get my driving impressions and more on the powertrain here.) The Lariat Sport is equipped with a black grille with magnetic surround and magnetic bars, magnetic painted bumpers and wheel lip moldings along with 17-inch aluminum or our model’s optional 18-inch wheels. (By the way every Ranger comes with a spare tire.) My vehicle had the available 5″ black rectangular running boards ($635) and the optional $495 spray-in truck bedliner.

The Ranger Lariat’s cabin is comfortable and I found myself admiring its quality and excellent fit and finish.  It’s a mix of soft touch materials along with some plastic that didn’t feel cheap. One thing you notice about the doors is the deep handles, helpful say for someone who is wearing thick gloves. The interior is what I would deem fairly minimalist in design and uncluttered. The center console stack is made up mostly of buttons and a couple of knobs. The center console storage bin is slanted on on side to make room for large cup holders. That is one design change Ranger Marketing Manager Chad Callander says they made specific to the U.S. market.

The leather-trimmed seats (cloth or vinyl for the XL and XLT) are comfortable and bolstered really well to provide great support. The Lariat’s heated front seats are 8-way power adjustable with power lumbar. It’s roomy inside with ample headroom so no worries if you’re tall.

The Lariat is equipped with a somewhat beefy leather-wrapped steering wheel and shifter, the bright tachometer is easy to read with colorful digital info displays flanking each side. It comes with dual zone climate (single zone for the XL and XLT ). The Lariat also comes with s 8-inch LCD touchscreen with SYNC 3 that includes navigation as part of a Technology Package. A rearview camera is standard across the lineup.

The Lariat is the most-advanced trim when it comes to tech offerings. It comes with keyless entry, a premium 10-speaker B&O sound system ( a 6-speaker system is standard.)  Two of the speakers are located in the upper corners of the front door at head level, and there’s a subwoofer behind the back seat. I also experienced the benefits of the Technology Package which includes rain-sensing wipers, remote start, navigation and a windshield wiper de-icer.  The number of 12 volts isn’t an issue. There are two in front and one in back.

The Ranger XLT and Lariat comes standard with Ford Co-Pilot 360 which is Ford’s driver assist technology.  Features included are BLIS (Blind Spot Information System) with Cross-Traffic Alert and coverage for both the truck and trailer, Lane-Keeping System, Pre-Collision Assist with Automatic Emergency Braking, Auto High-Beam Headlamps, and Rear View Camera.  Co-Pilot 360 is optional on the XL, but it does thank goodness come standard with Pre-Collision Automatic Emergency Braking.  Callander says the Ranger is the only truck in its segment to have a forward and reverse sensing system.

The new Ranger is a great-looking mid-sized pickup for the masses – both inside and out – and other automakers in the segment should be worried.