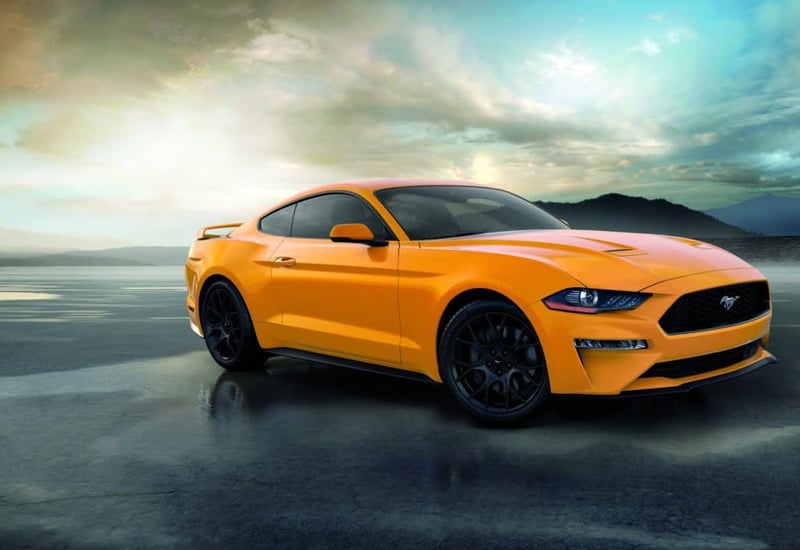 So I'm just going to cut to the chase here. The 2018 Mustang proves you don't have to be all-new to wow a crowd. Both the EcoBoost and GT arrive refreshed to impress. I know this firsthand because Ford recently flew me out to a two-day press event in at Calamigos Ranch in Malibu, California to drive both the 2.3-liter EcoBoost and 5.0-liter V8 GT models through the winding roads of the Topanga Canyon. Of course, these extremely well-made cars perform very differently and are geared towards different types of drivers.  The GT with its gutsy exhaust and performance-oriented features will, of course, beckon power and track enthusiasts. While the 2.3-liter will attract pony car lovers who love the idea of the iconic sports car but aren’t so concerned with hitting the drag strip. So in the spirit of all Mustang lovers, here’s a look at both along with my first drive impressions.

First and foremost, the V6 engine is completely dropped from the lineup. The turbocharged 2.3-EcoBoost is now the Mustang's default engine with 310-horses and 350 lb-ft of torque.  The GT's reworked 5.0-liter V8 packs 460-horses along with 420 lb.-ft of torque, a gain of 25 horses and 20 lb.-ft over the 2017 V8. The available all-new MagneRide suspension system – borrowed from the Shelby GT350 – improves the ride. It’s a new option with Performance Pack and standard with Performance Pack Level 2.  The active damping system uses sensors positioned around the vehicle to adjust the suspension based on various inputs, including speed, steering angle, brake pressure, lateral and longitudinal acceleration, engine torque, drive mode selection, and even outside air temperature. Mustang Vehicle Dynamics Engineer Mike Del Zio takes us through some of the changes to the Mustang’s driving dynamics - which also include new high-performance Michelin Sport 4 S Summer tires.

In the looks department, the 2018 Mustang has a lower and wider body with a lower, restyled hood and air vents and a new front splitter for improved handling and fuel economy. For the first time, every Mustang receives LED-front lights. There are revised LED taillights and a new bumper plus an available performance spoiler. There are also a dozen available alloy wheel designs. A dual-exhaust comes with the 2.3-liter, while the GT comes with a quad exhaust which adopts some elements from the Shelby GT350.

Just a short two hours after arriving in California a few weeks ago, I found myself behind the wheel of a 2.3-liter EcoBoost Mustang Premium in Royal Crimson with 20-inch Premium Painted Aluminum Wheels.  Royal Crimson, a $395 add-on, is a new color for 2018 along with Orange Fury. Once in the driver’s seat, it only took me a few minutes to deduce that the ‘18 Mustang is just a flat-out fun-to-drive ride.  The EcoBoost is the model for Mustang enthusiasts who don’t necessarily need the power of a GT (and the roar of its V8 engine.) But don’t let that fool you. It has plenty of pep under the hood. The aforementioned new 2.3-liter turbocharged EcoBoost is a great engine good for 310 horsepower. I took my spin with the quick-shifting 10-speed automatic instead of the manual. The ride quality also really impressed thanks to revised shocks.  The cabin’s design, comfort level, and Ebony Leather interior all get my thumbs up. Inside, there are restyled seating surfaces, a hand-stitched dashboard, and a glowing red push-button start. You can also customize the color of the interior lighting.  There is a handy four-gauge toggle system in the center with selectable drive modes:  Normal, Snow/Wet, Sport, Track and a new Drag mode.  My favorite cabin feature would have to be the all-new available 12-inch LCD digital instrument cluster. It’s bright, and easy to read with colorful graphics.  Ex-video game developers helped design the system which features 10 animated graphics for various drive modes, and other info.   A new customization feature called MyMode allows drivers to save their favorite settings for suspension and steering as well as exhaust note preferences. The 2.3-liter’s price tag starts from a reasonable $25,585 for the manual– not a bad for an entry-level Mustang. But as with my First Drive model, as equipped it can run you up to the $40K ballpark (in my case $39,770) fast.

On day two of Ford’s press drive, I found myself staring into the face of an Orange Fury GT Premium with 19-inch GT Performance Pack wheels. Then I heard it roar. As GT fans can surely attest, this is more what I’d call heart-pounding versus enjoyable Sunday drive. This reworked 5.0-liter V8 packs 460-horses along with 420 lb.-ft. of torque. It also revs higher than any Mustang GT before it. Once again I opted for the quick-downshifting 10-speed automatic in lieu of the 6-speed manual.   The GT comes with standard quad-tip exhaust, and drivers can now customize the sound with an all-new $895 active value performance exhaust option. Its four exhaust modes are quiet, normal, sport and track mode.  They can also program the car to start in quiet mode, for example, if they don’t want to wake the neighbors at 7 am. Inside, my GT featured leather-trimmed seats, climate-controlled front seats, and a heated steering wheel. The Mustang GT starts around $35K and can take you to the 50K ballpark with options like the GT Performance Pack and available safety feature add-ons like Blind Spot Monitoring. By the way, the new Orange Fury hue costs an extra $495.

What Else To Know... 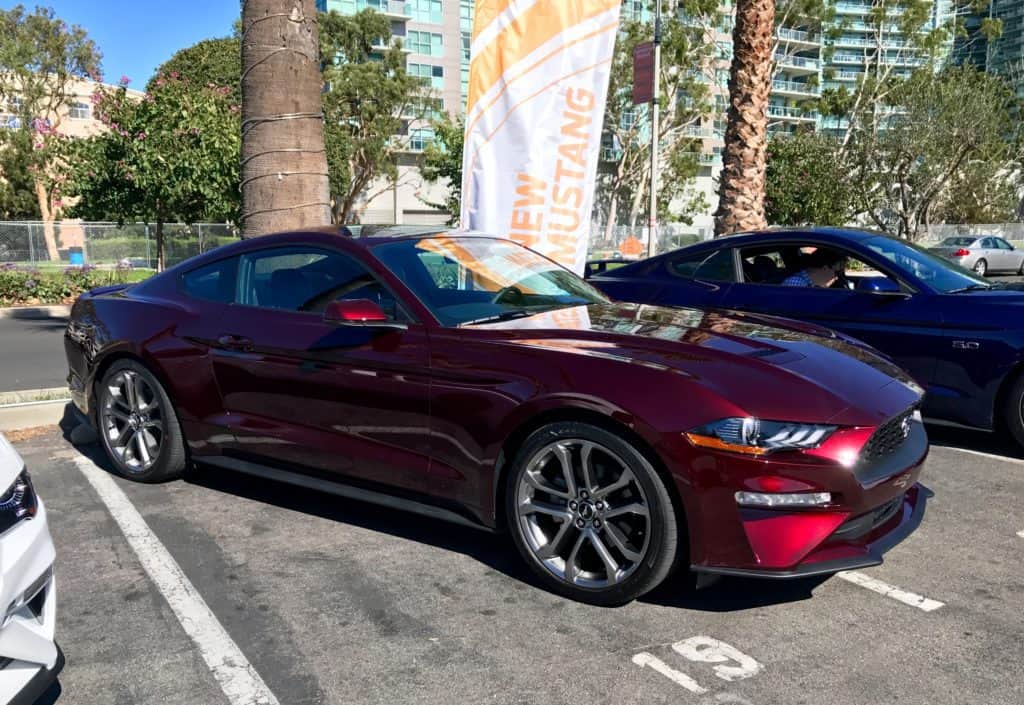 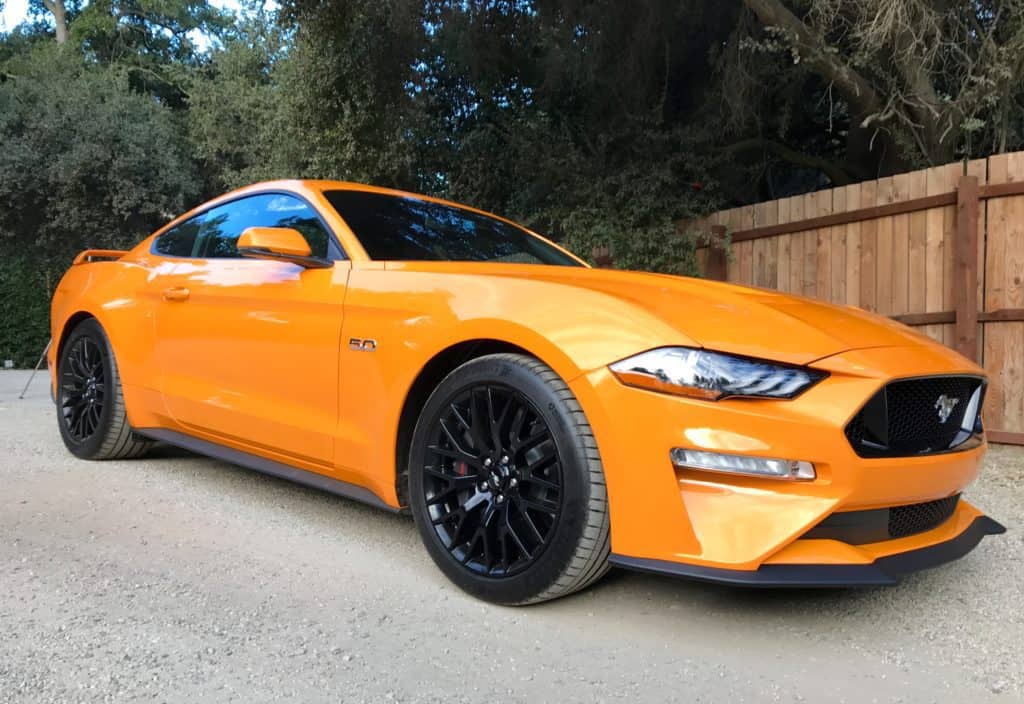 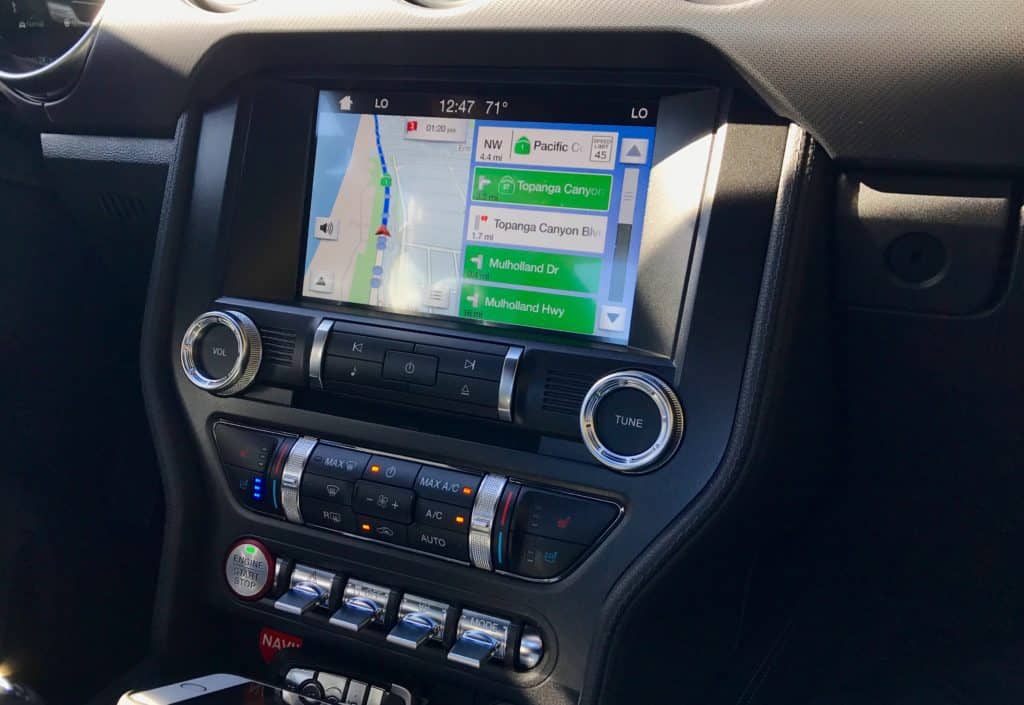 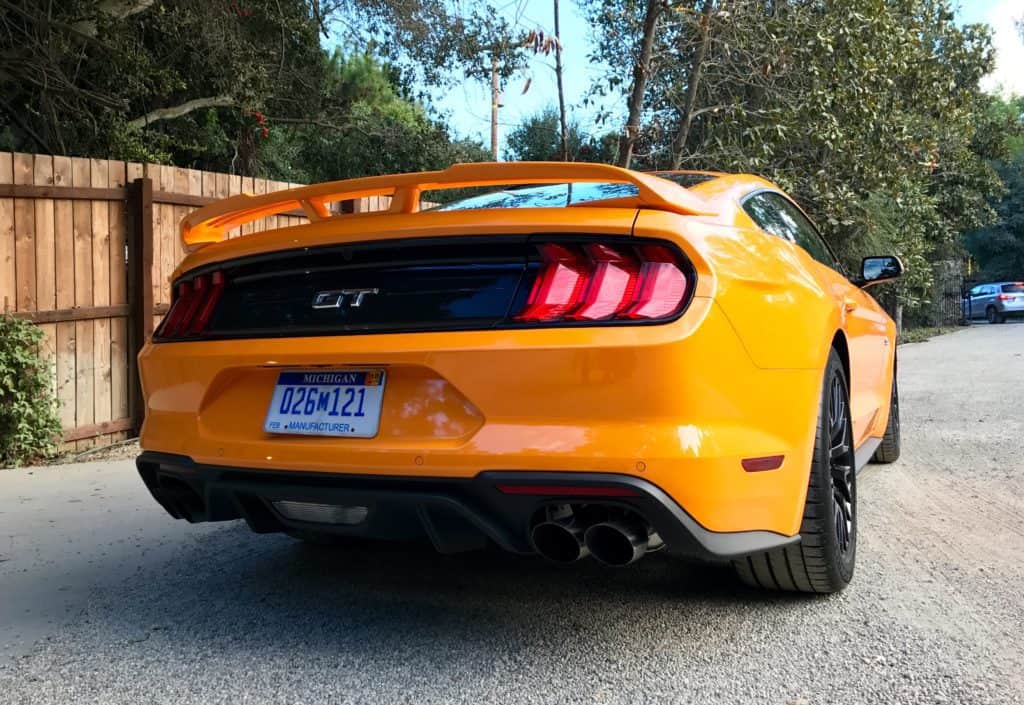 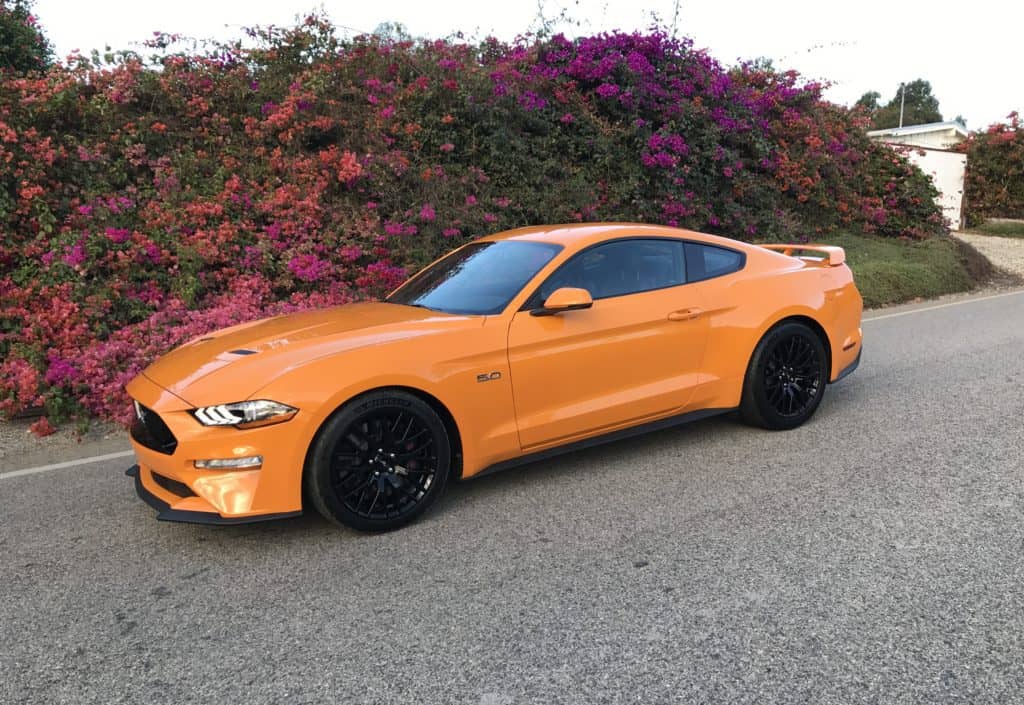 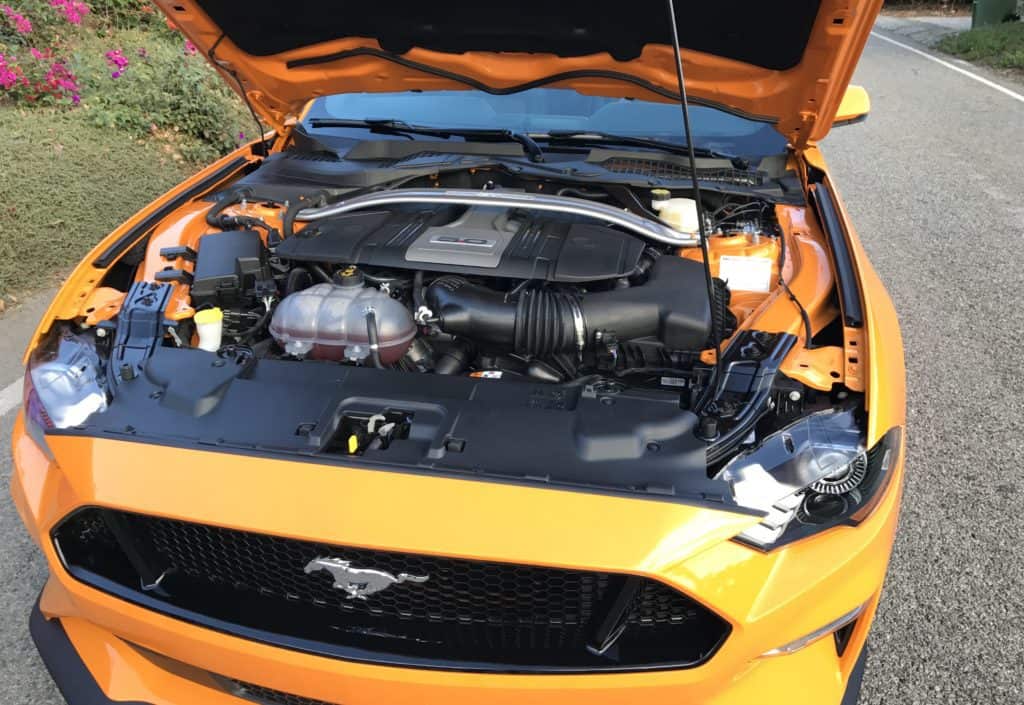 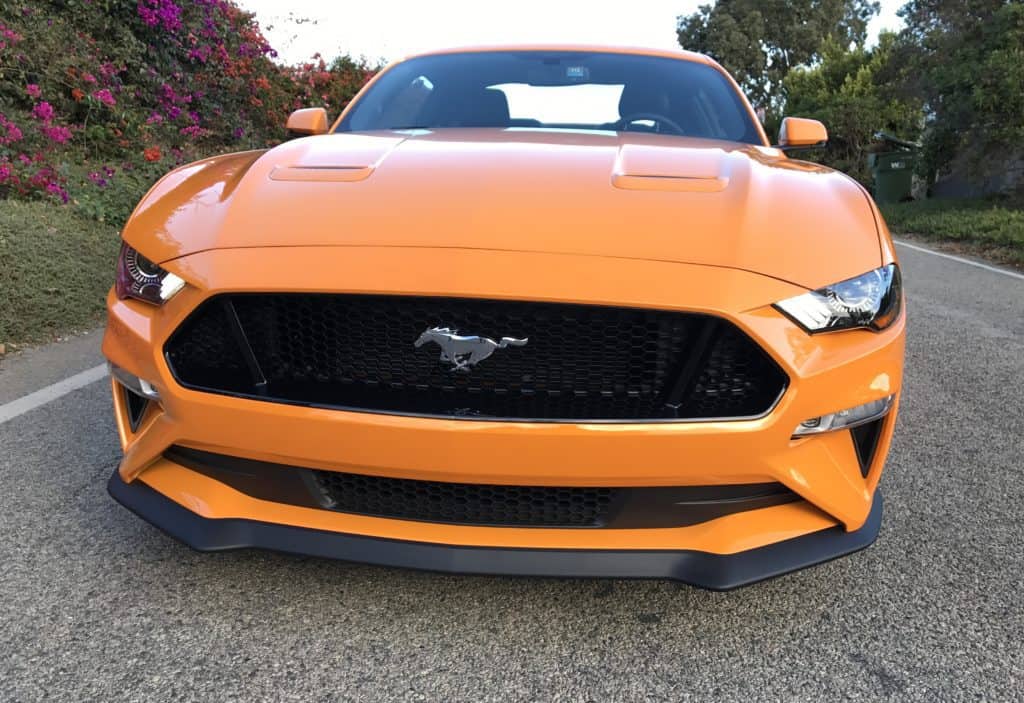 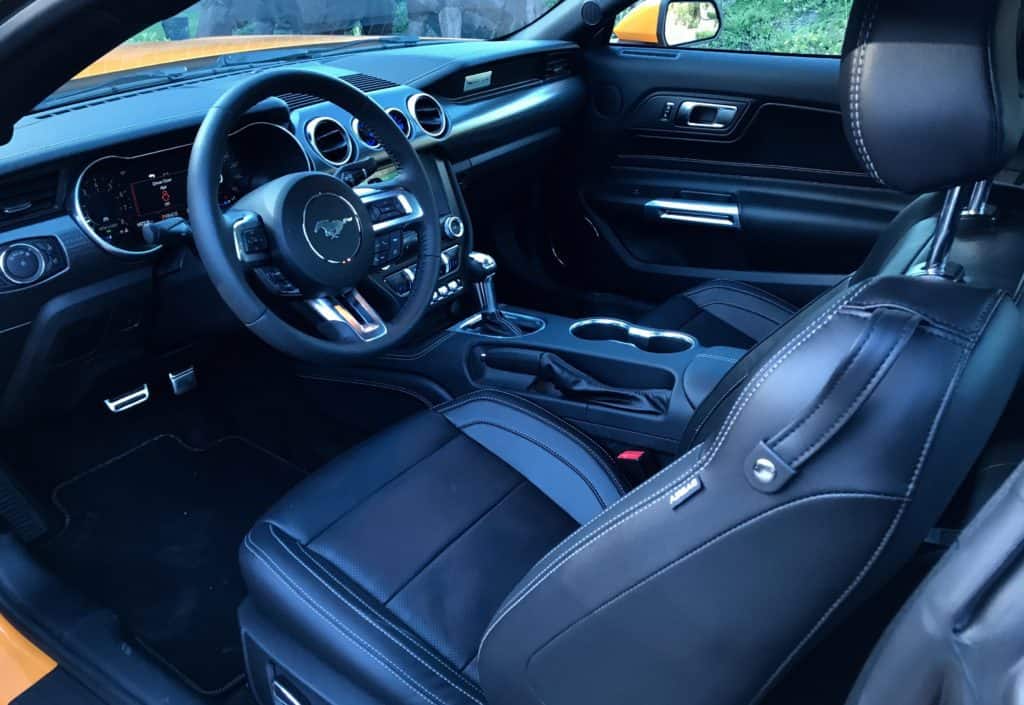 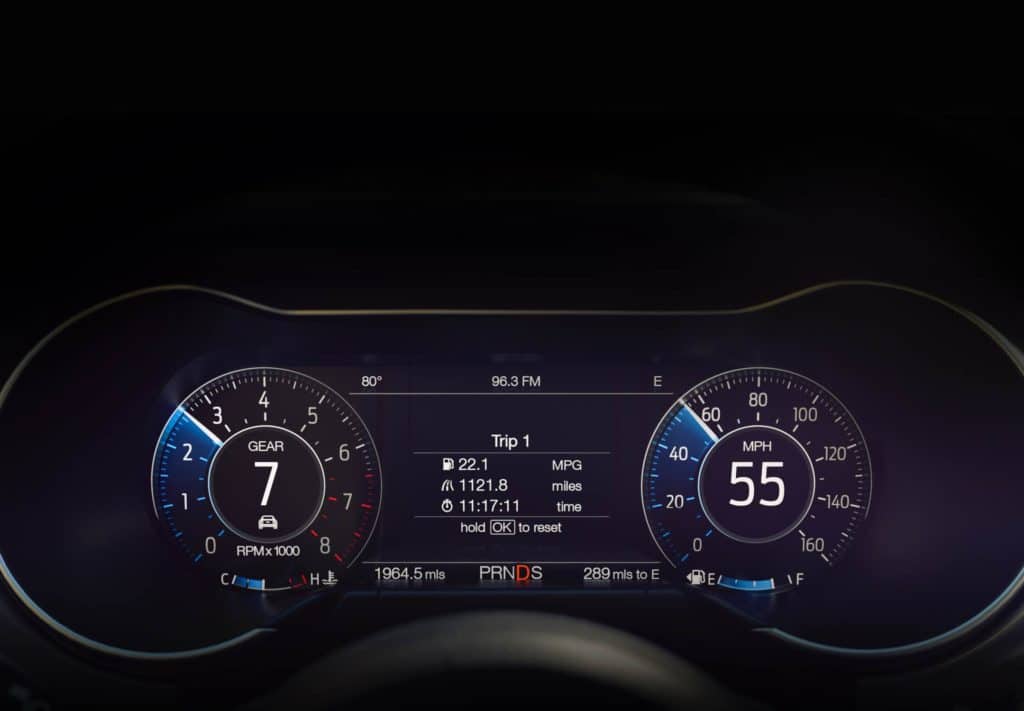 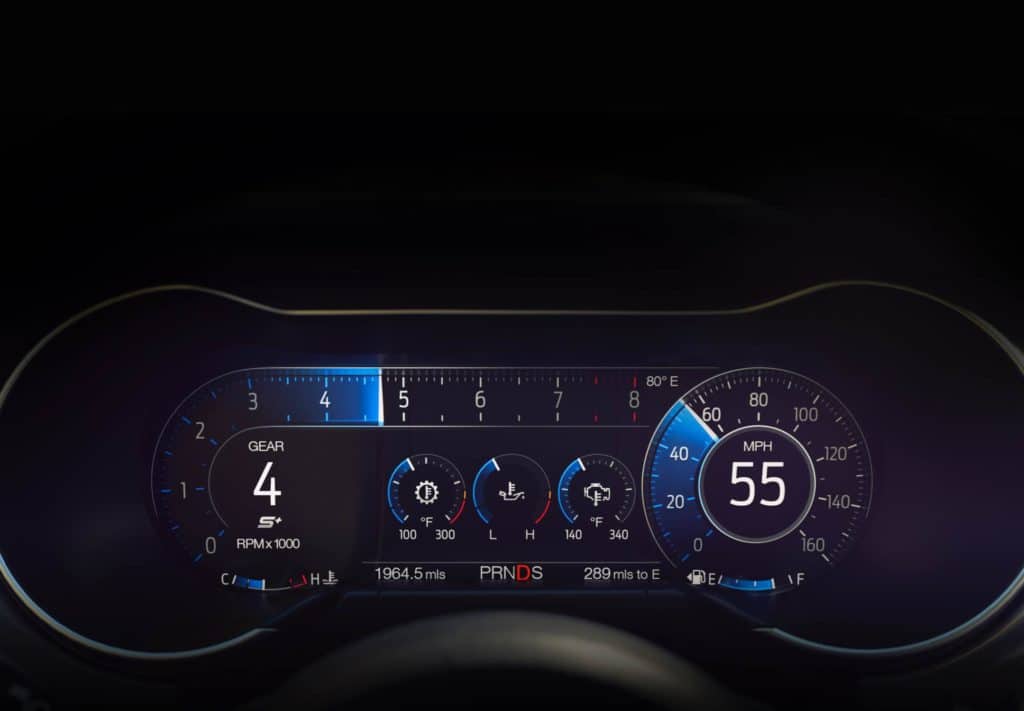 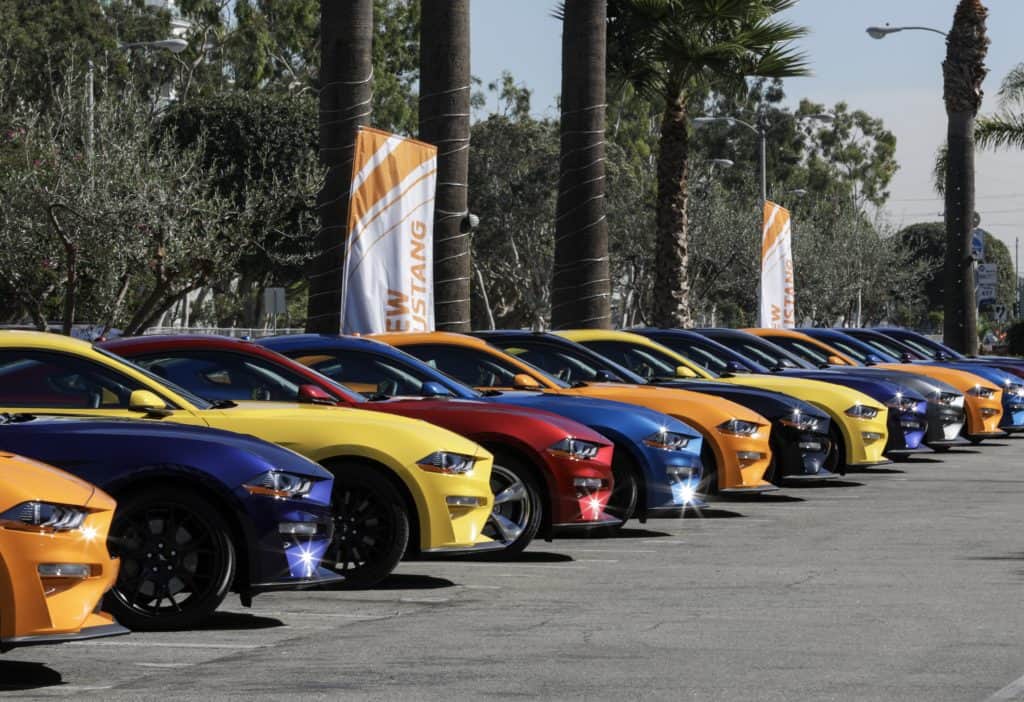