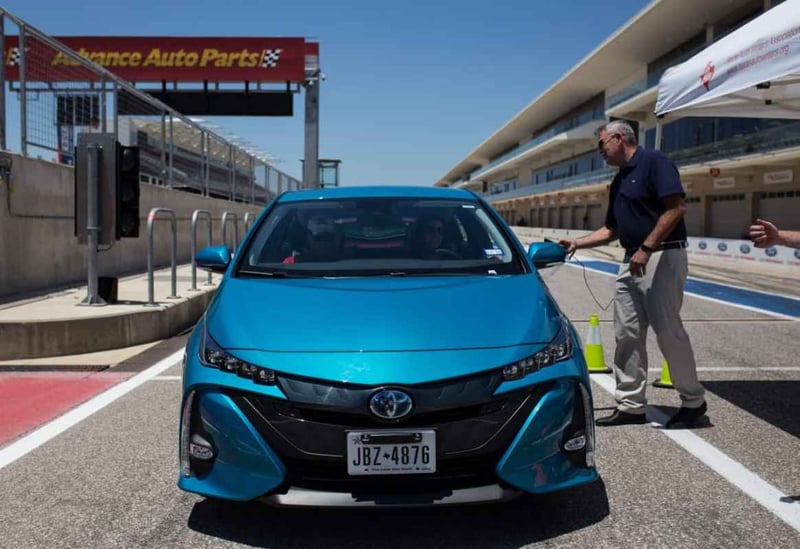 Nope, you can't order it and have it delivered to your house in two days via Amazon. But the 2017 Toyota Prius Prime - Toyota's most advanced hybrid - is worth waiting a little longer for.  After eyeing the Advanced trim tester all weekend during at the recent Texas Auto Roundup, it was finally my turn behind the wheel. Charged up and ready to go, I hit the Circuit of the Americas track accompanied by a Toyota representative riding shotgun.

Hopping behind the wheel of plug-in doesn't inspire ideas of endless power, but the model is surprisingly zippy. It took off from the launch point with controlled, disturbingly quiet ease. While rounding the corner and braking I asked my Toyota rep fast it goes from 0-60 mph. "They haven't officially taken the time yet." Well don't be mistaken, it's not Mercedes-AMG, but it also gets at least the new standard acceleration of the non-plug-in Prius. So around 10-seconds.

It drives much like the standard Prius, but is even more quiet in terms of engine sound, because of all the electric power.

It was a fun model to drive around the track. No problems accelerating or cornering, but braking is rather sharp and whiny. Maybe I'm just not attuned to the fine art of plug-in driving though.

A few features set the Prime's exterior apart from a normal Prius. They include a blacked-out front grille in the front and longer LED foglight strips. In the rear, unique taillights accentuate the Prime-only wave-style hatch. Also, don't forget to check out the exclusive Blue Magnetism paint.  It's a stunning blue color that could make mermaids sing.

It's on the inside that really counts. Or more just straight up sparkles. Opening the door instantly makes it clear the Prime is not a regular standard Prius. The seats are done in a beautifully soft faux-no-animals-were-harmed-leather. They accentuate the black and white theme throughout the cabin. It's not black and white as in black seats and some white on the dash, but rather a legitimate equal mix of carefully chosen black and white throughout.

Accents are in a lovely plug-in Prime blue and are on the air vents, stitching, and onscreen graphics. The cute little drive mode shifter and push button start are a translucent blue.

Look for sparkle speckles in the smooth material making up the dash, center console, and panels. It's most noticeable in the black.

Unlike the standard Prius, the Prime only offers four seats. My rep explains:

We decided to remove the rear middle seat to make room for the battery. It also allows for the two seats to be more comfortable as we're able to give them each more detailing and more captain chair like support.

Between the two seats is a nice cup holder and storage compartment area. It does have 60/40 split fold-down seats so that's a plus, bur rear storage overall isn't great due to the battery pack.  The hatchback shape does help create more space than what would otherwise be there if it was a sedan. But the trunk isn't deep and is basically flat loading. The plug tucks into a nice little area right behind the bumper in a trunk floor nook.

The information displays are true to the Prius. They're centrally located and far up on the dash. However, the Prime takes everything to a new level of innovation in a way that brings the all-electric Tesla to mind. Like the Tesla, it comes ith a huge, tablet size 11.6-inch HD multimedia touchscreen replacing the standard media and environment buttons.  Toyota does leave a few touch sensitive buttons running alongside the screen though including emergency lights, volume, and temperature. Which is nice for not having to go back and find the application for those systems and just being able to adjust those basic features no matter what's running on the screen. I personally find big touchscreens a bit intimidating. Like a tablet though, I'm sure spending some basic time with it would make it second nature to use.

There is no range anxiety here.

One of the main concerns about plug-ins is just how far can you go. But you won't find yourself with much range anxiety with the Prius Prime.  Distance wise, it can cruise for up an EPA-estimated 640-miles with a full charge and a full tank of gas. It has an EV-only range of 25 miles. Either way, the Prime's range crumples the competition. By comparison, the Chevrolet Volt has a 53-mile battery range alone and Nissan's electric-only Leaf will get you 107-miles.

The best current competition would be Hyundai's new 2017 Ioniq Hybrid with a similar total cruise range of 690-miles combined. Though it's offered as a standard hybrid now, it will be offered with a plug-in hybrid powertrain this fall. At that point, the Prius should gain some real competition. Fuel economy is 133 MPGe and 54 mpgs. In terms of charging time, using a standard plug you can charge up in less than 5:3o hours. Use a 240V and cut that down to 2:10 hours.

The top-of-the-line Advanced trim, like the one I drove, starts at $34,055. That price will drop below the $30k line with an eligible $4,500 federal tax credit. Depending on where you live, the price can go even lower with state incentives. If the price is still an issue for you, go for the base model which runs $6,000 less at a $28,055 sticker price.   The 2017 Prius Prime is available in all 50 states and all Toyota dealers.

Click here to find a Car Pro Certified Dealer in your area. 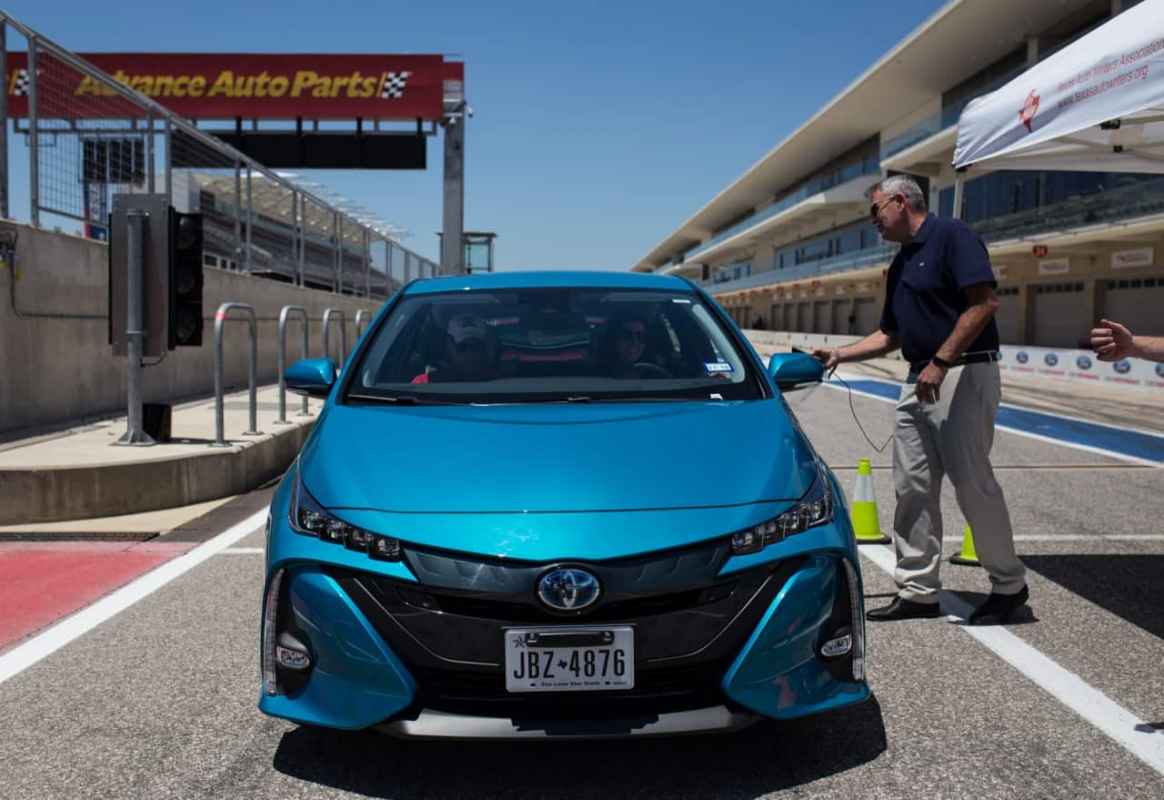 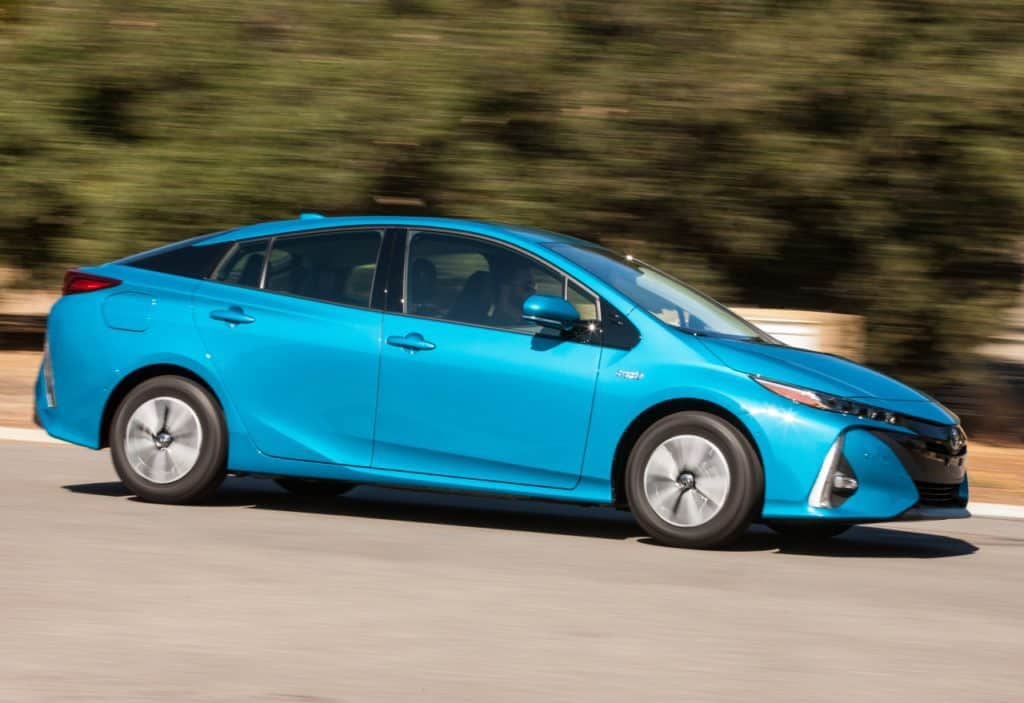 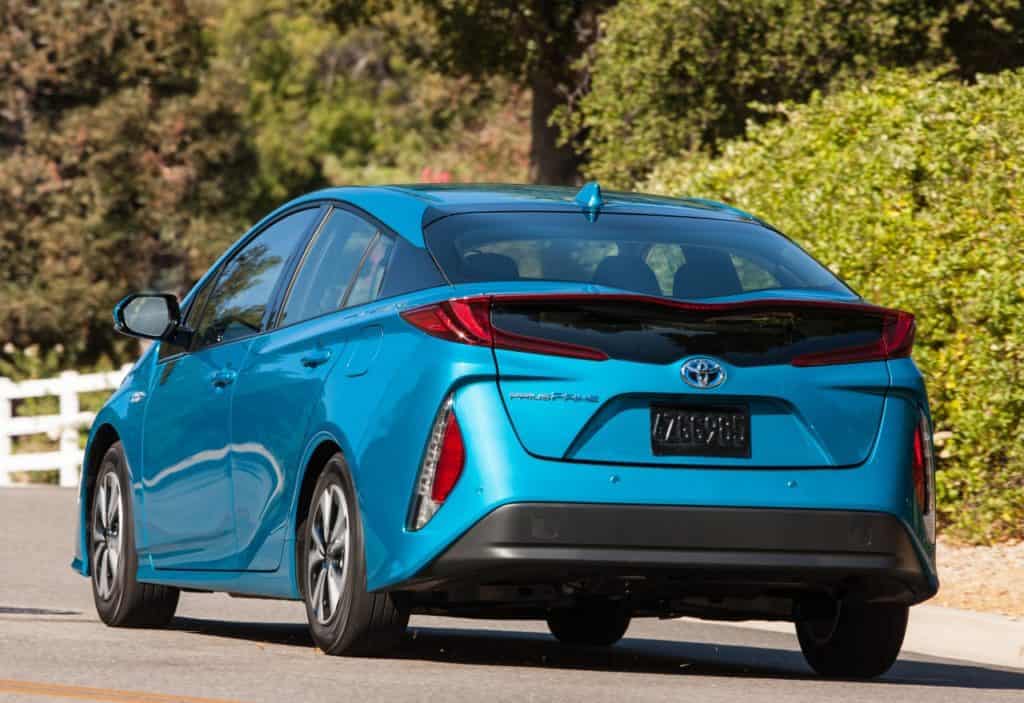 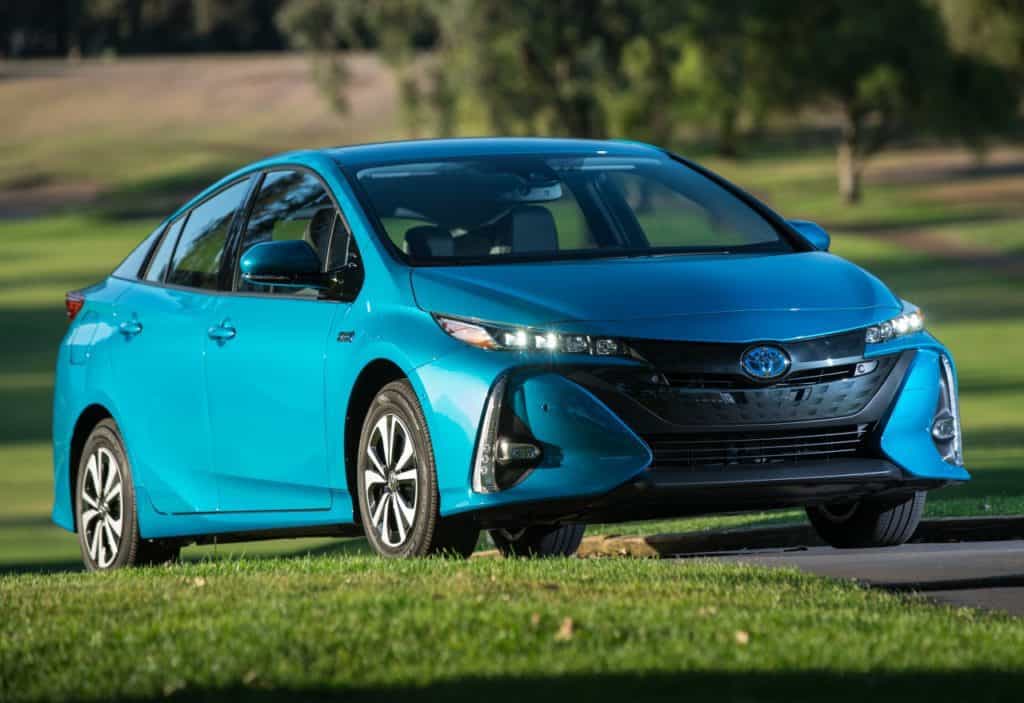 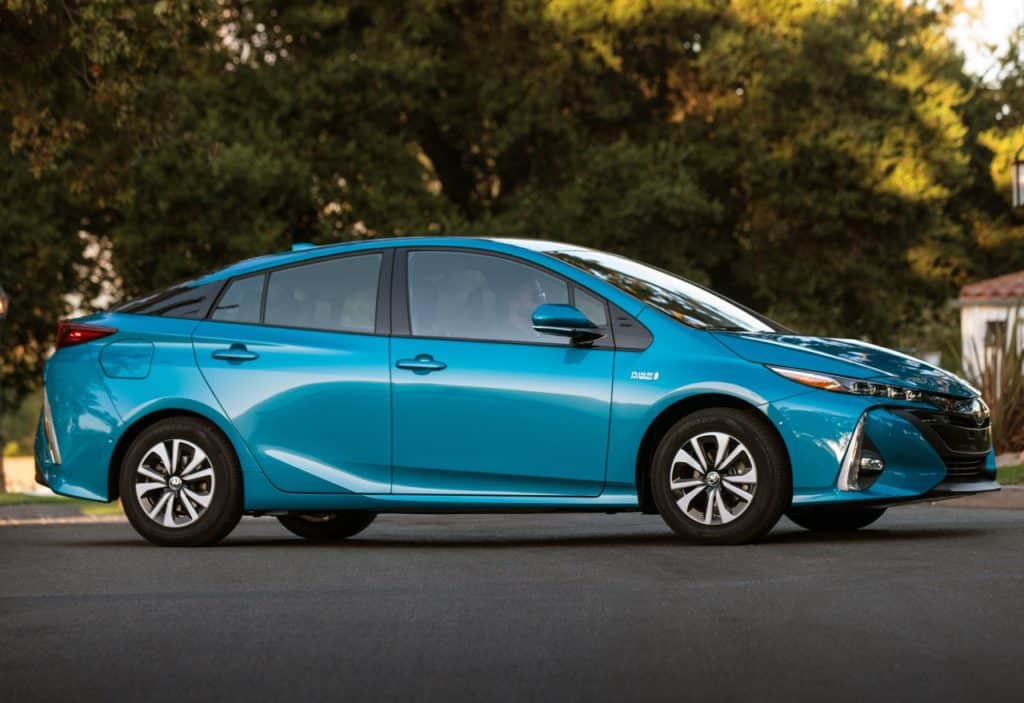 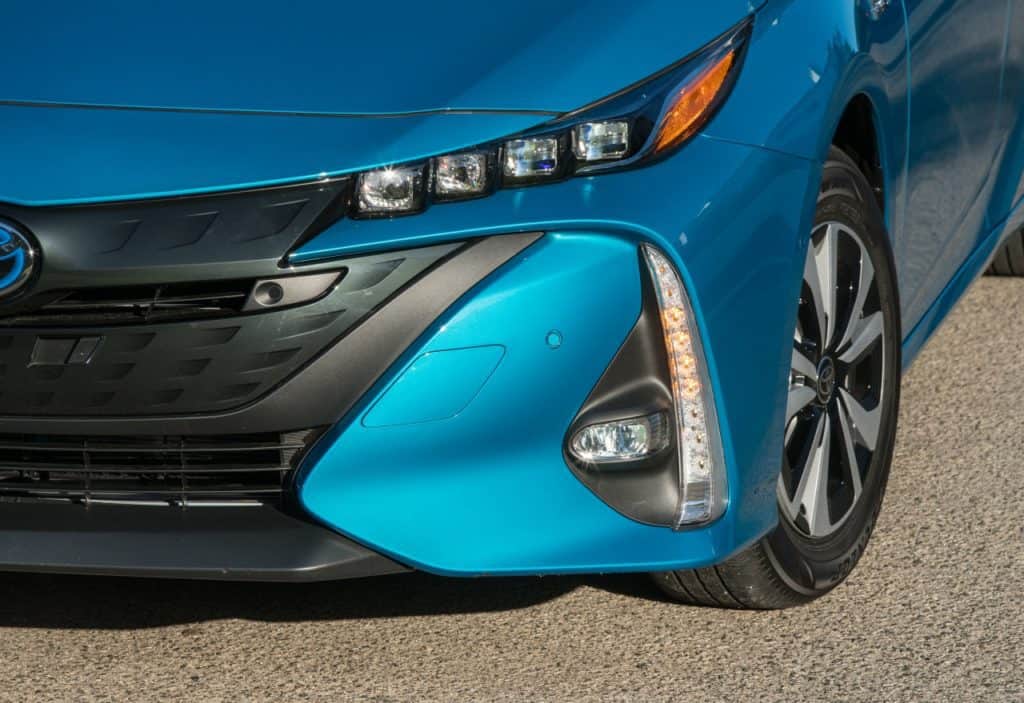 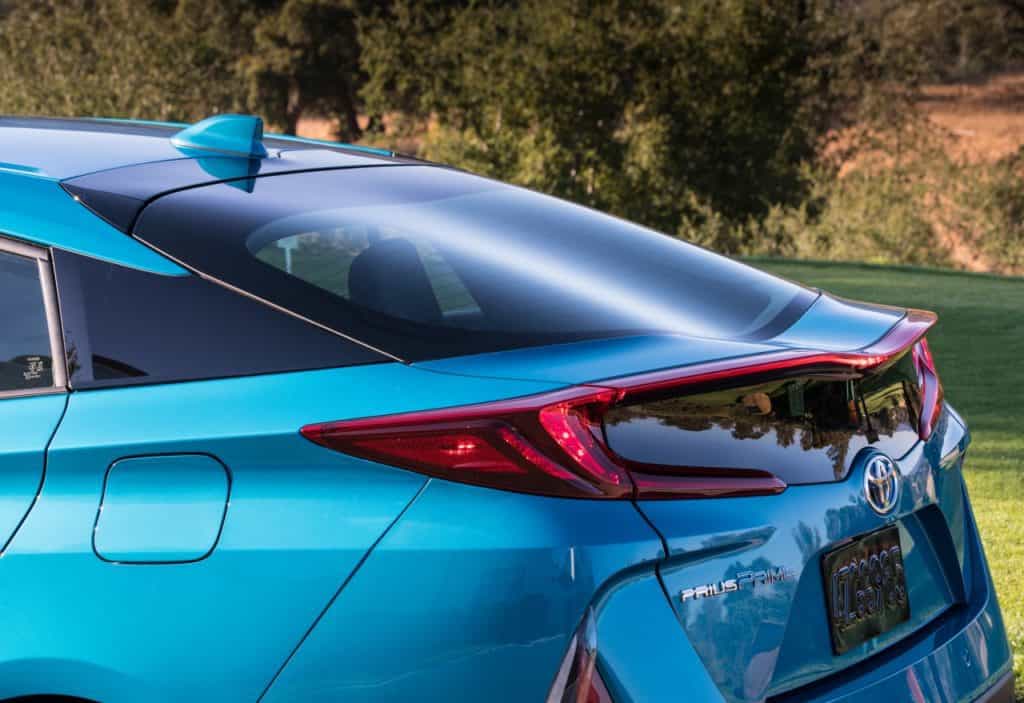 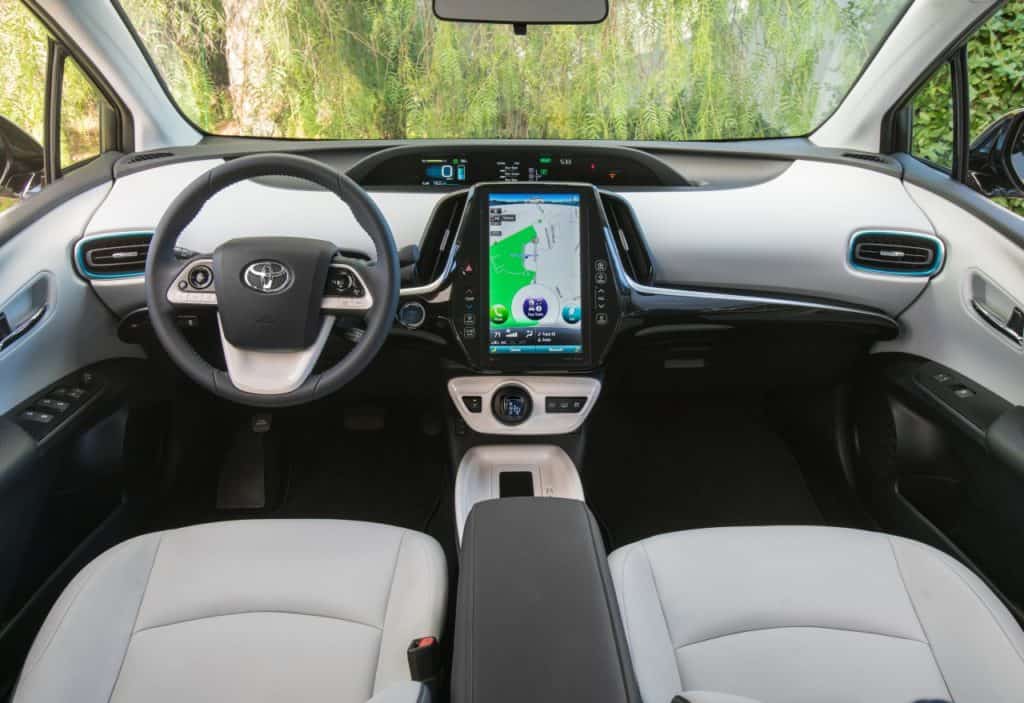 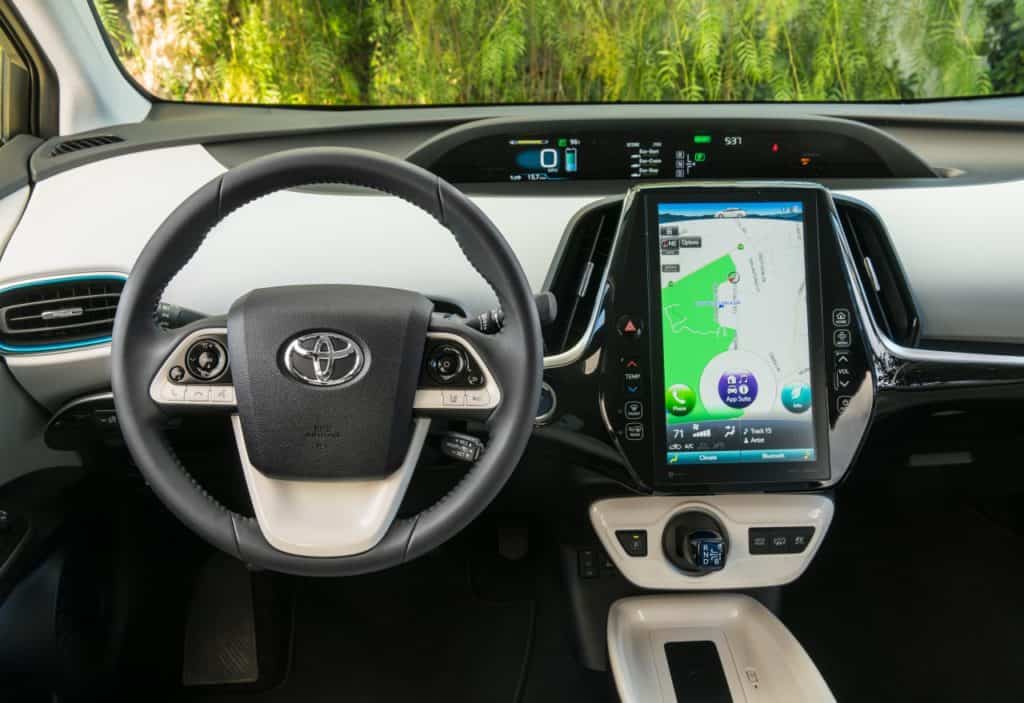 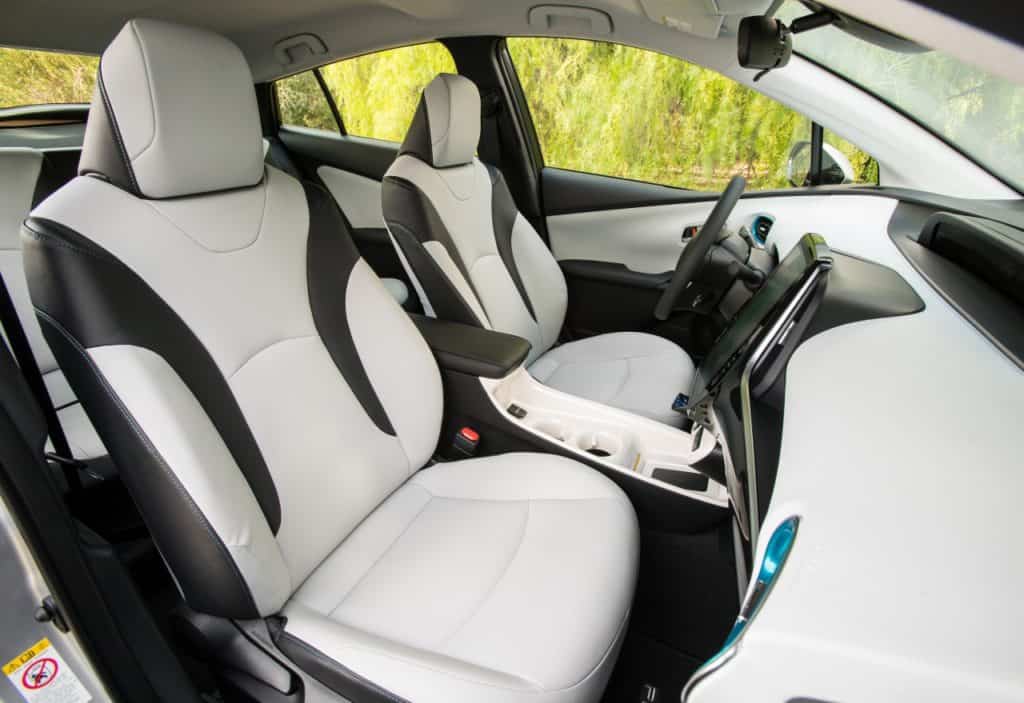 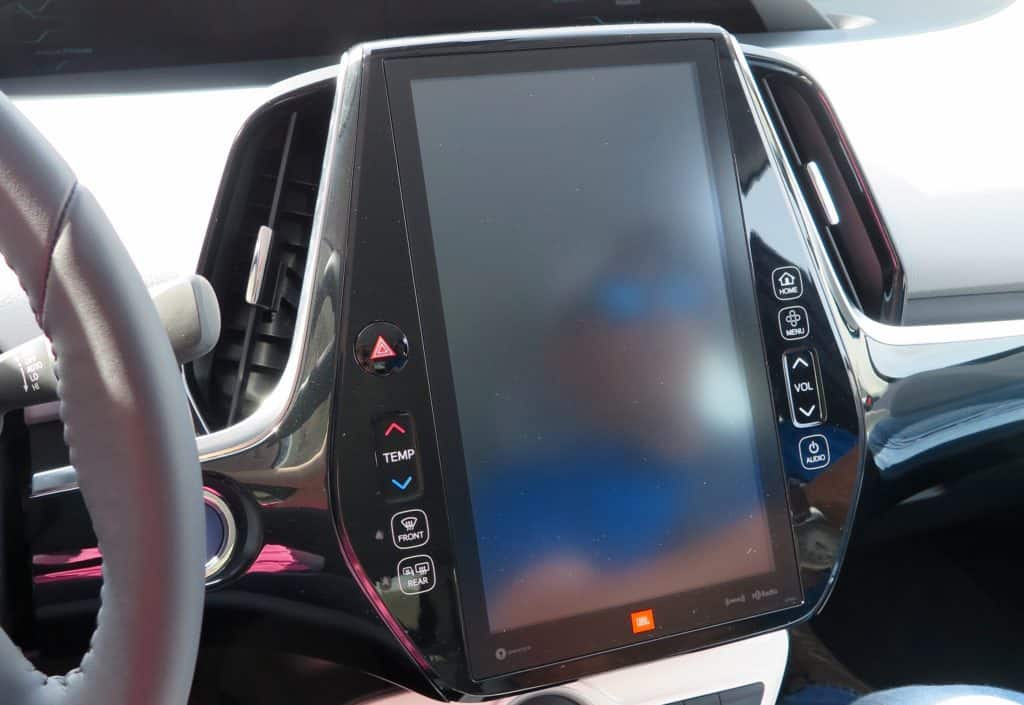 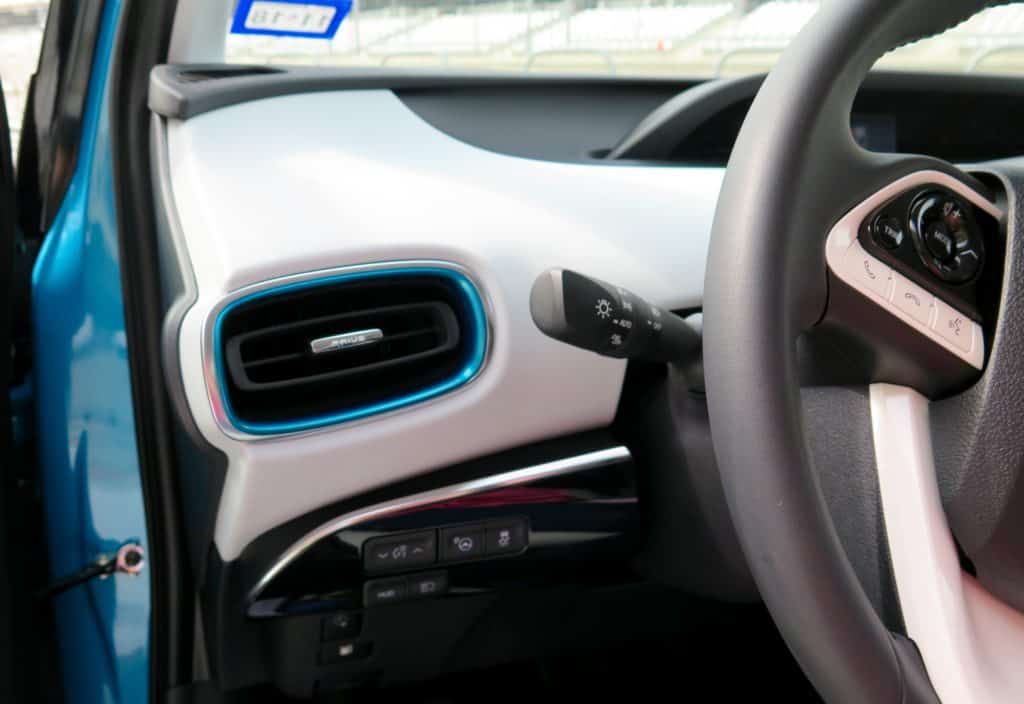 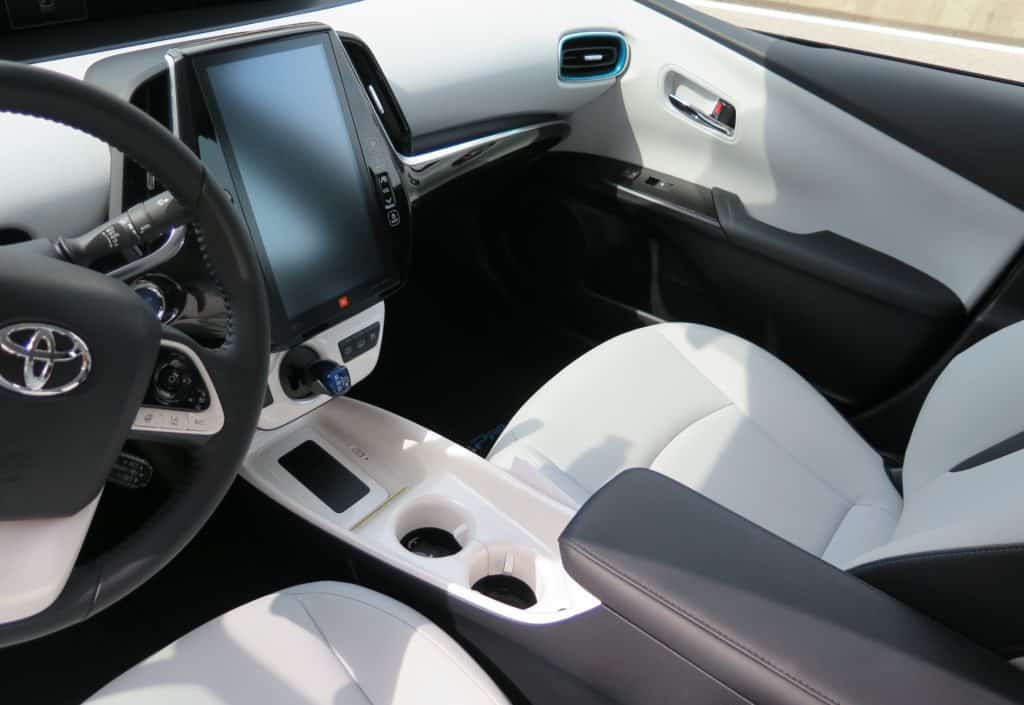 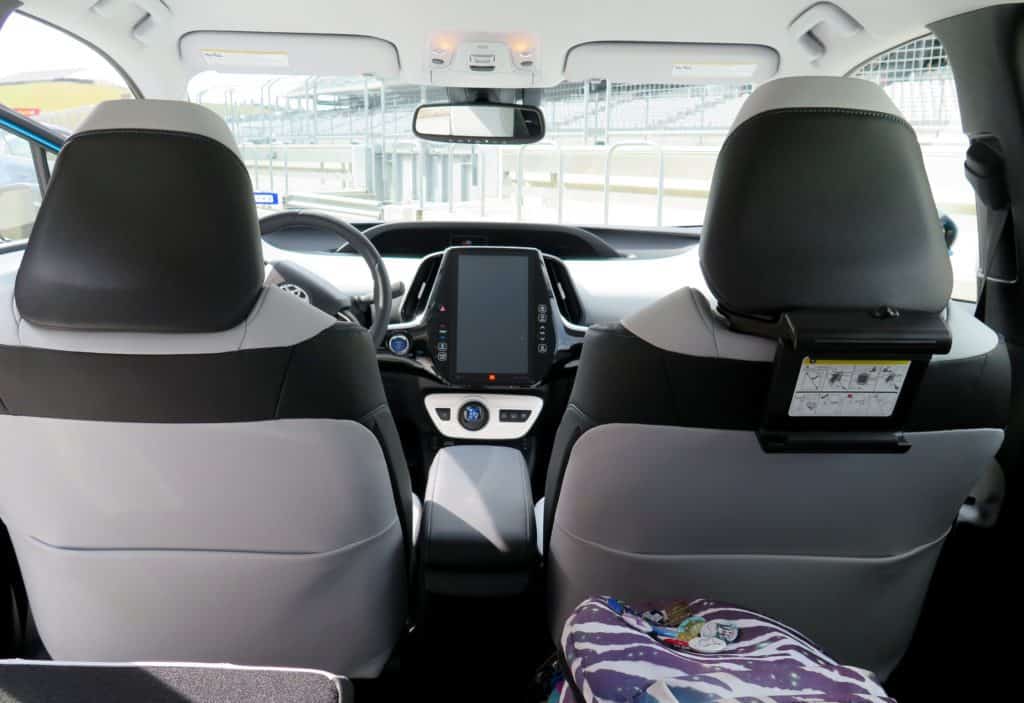 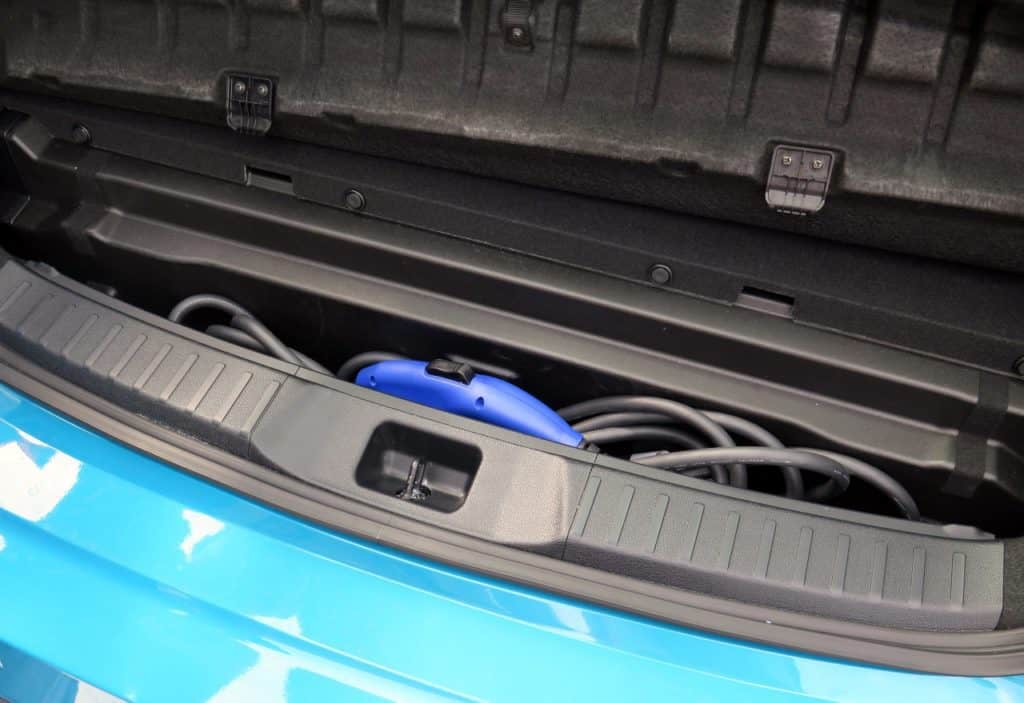 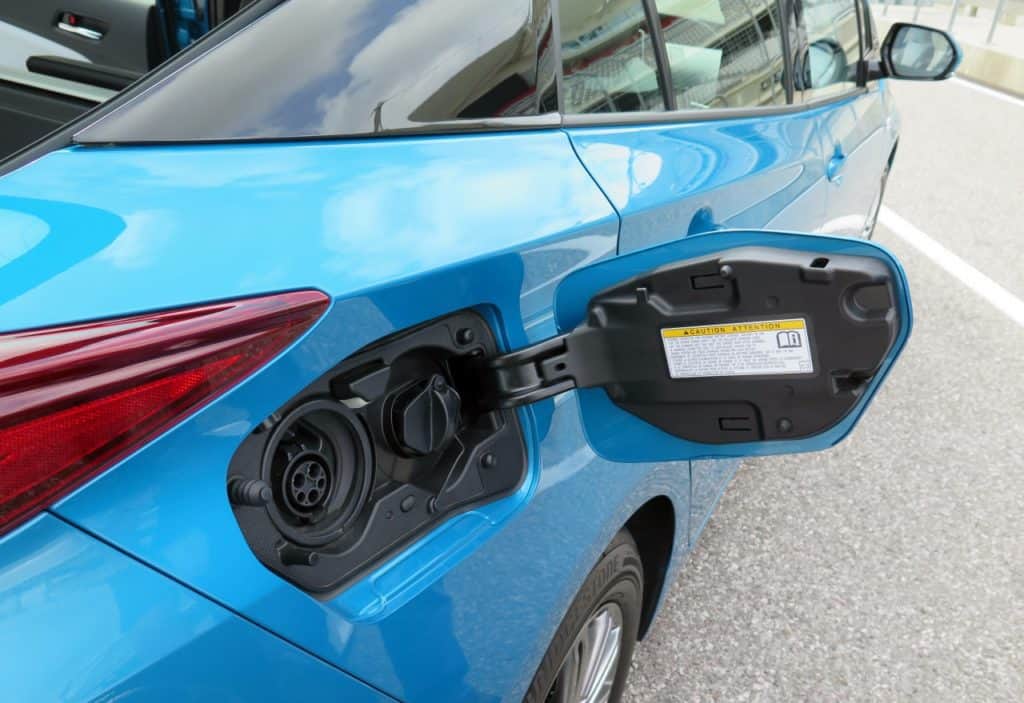 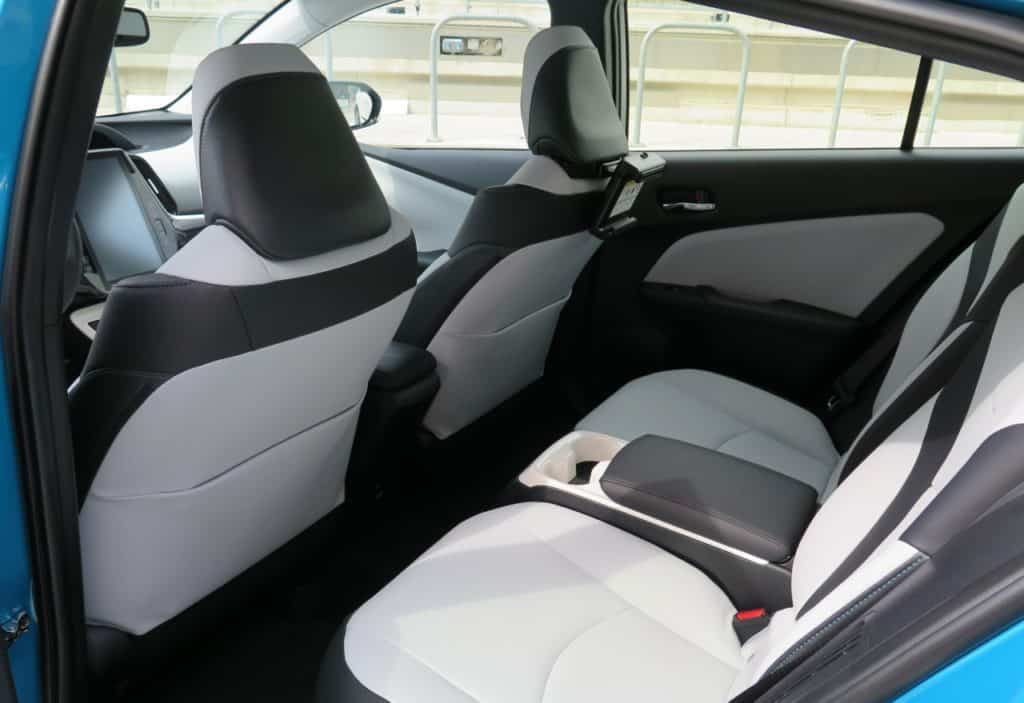 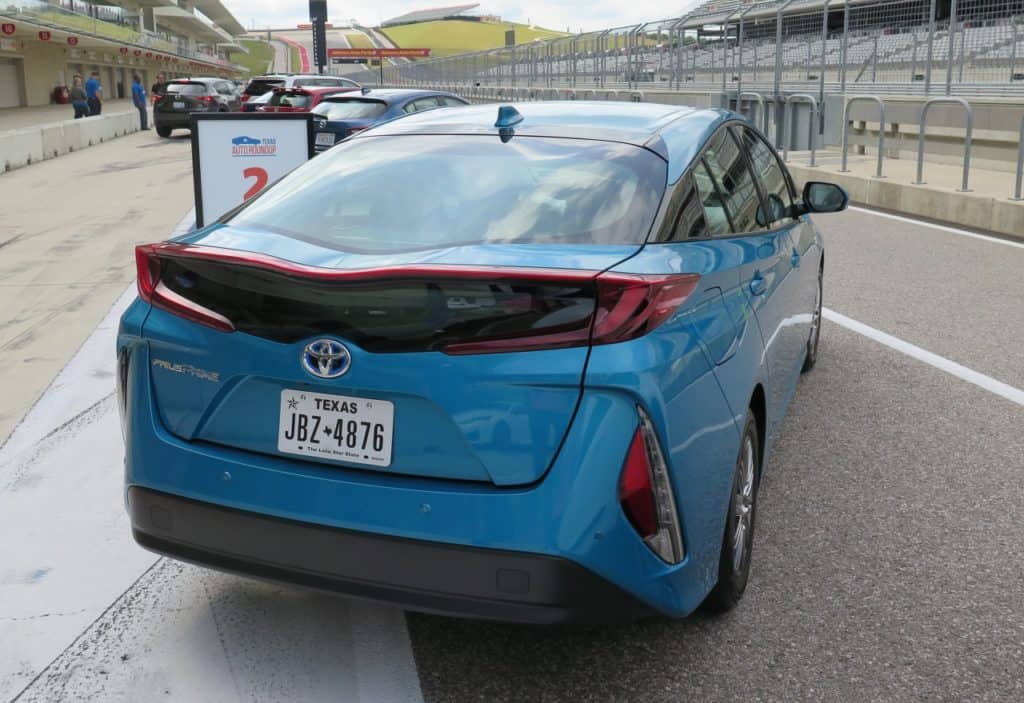 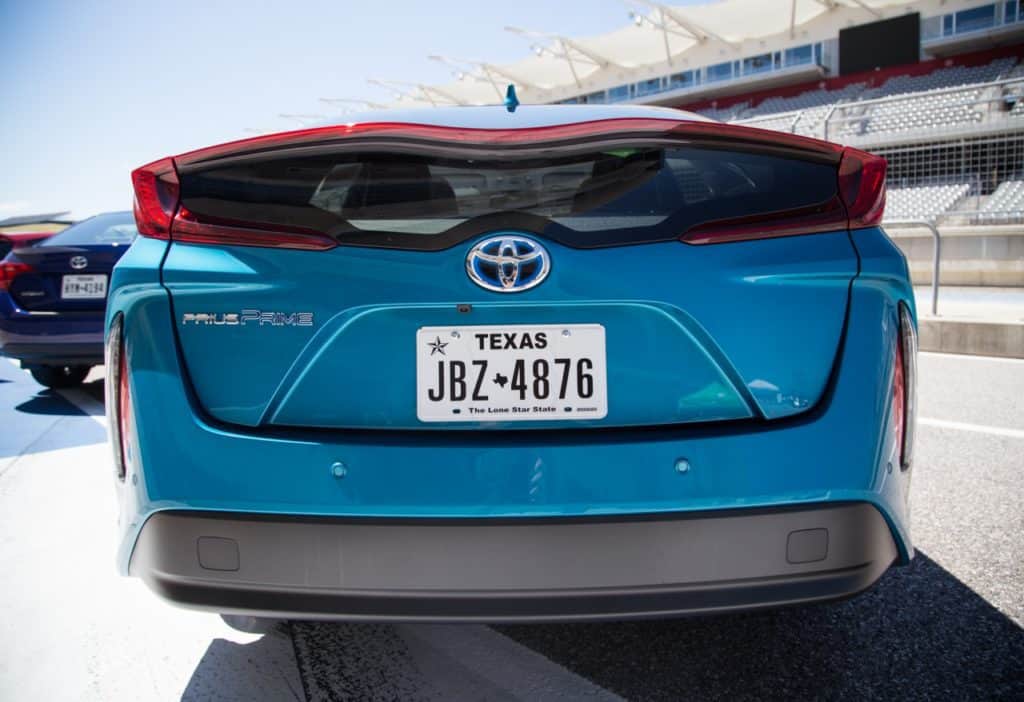 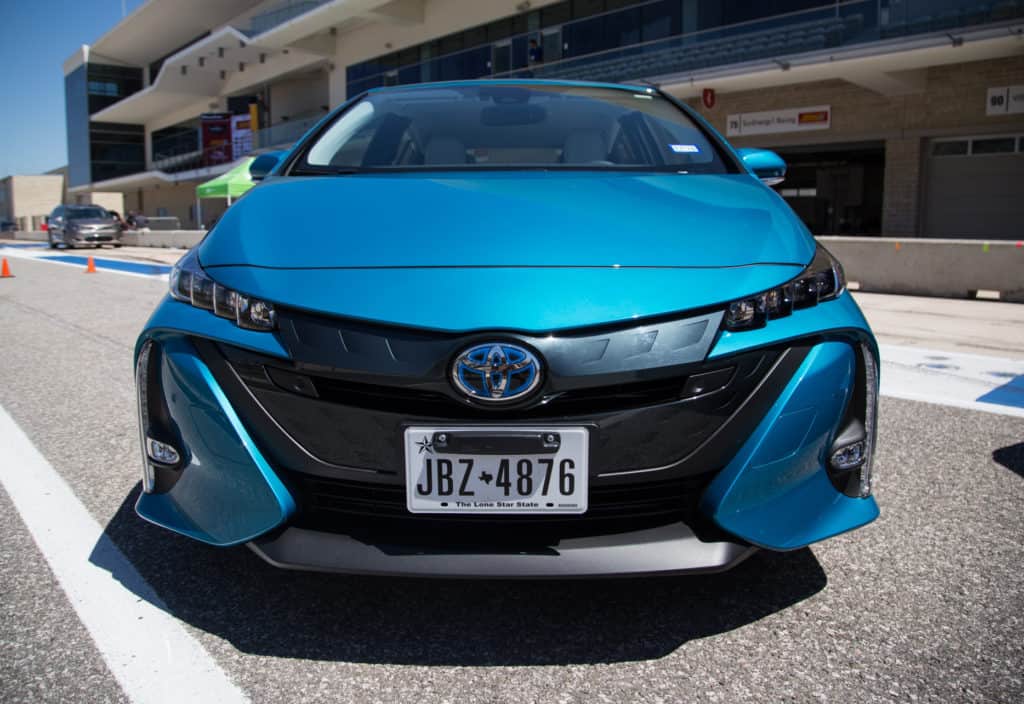