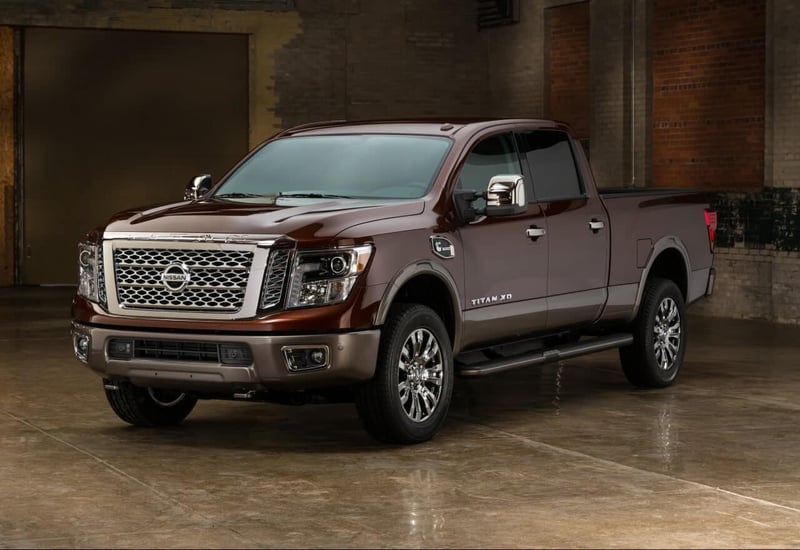 This week I am behind the wheel of the 2016 Nissan Titan XD Diesel pickup.  I have racked my brain on how best to describe this truck because there is nothing else out there like it.

It is larger than a half-ton, but not as heavy duty as the other ¾ ton trucks on the market.  It is a hybrid of sorts between the two.

Titan came into the U.S. in 2003 but has never been a contender with F150, Silverado, Tundra, or Ram 1500 series trucks, so Nissan set out to finally have a player in the very lucrative truck market.


The real story of this truck is under the hood, where you find a 5-liter Cummins V8 diesel engine, a brand name made famous by Dodge and then later by Ram trucks.  This truck is rated at 310-horses, but more importantly it has 555 pound-feet of torque.  While it has impressive torque, it falls well short of its competition in the other ¾ ton diesel trucks.  As an example, the Ford Powerstroke comes in at over 800 pound-feet. Titan comes with a 6-speed automatic transmission.  The Cummins and the 6-speed are your only choice in the Titan XD, although a V8 gas version is coming out later.  My review truck is a 4x4 although you can get a 2-wheel version.

Titan comes in five trim levels; starting with the S, which has a base price of just over $40,000.  From there you go to the SV, the Pro 4X for the serious off-roaders, the SL, and then the top-of-the-line Platinum Reserve, which is what I am reviewing.  Although Platinum Reserve sounds more like a whiskey than pickup, this package has an interior on par with Ford’s King Ranch, or Chevy’s High Country.

The two-tone leather quilted seats are super comfortable, stitching abounds, and Nissan left the gearshift on the steering wheel to allow for a huge center console.  In the center of the dash is a driver info center that tells you everything you could want to know about the truck.

Above the center console and to the right of the power-adjusting heated wood and leather steering wheel, is a 7” color display that operates the 12-speaker audio system, Nissan Connect with navigation and real-time apps, Bluetooth, and voice activation.  I was a little surprised Nissan didn’t use a bigger screen, but it is adequate.

Some cool things about the Nissan Titan to note are the comfort and room in the back seat.  Fold them up to reveal a couple of lockable storage boxes, and flip over partitions to create a flat load floor.  Back seat occupants get the use of a 110-volt electrical plug.

The pickup box has some neat features, too.  You get a factory spray-in liner, a built-in gooseneck hookup, as well as a frame, mounted trailer hitch.

You also get the Utilitrack channel system with 4 adjustable tie-down cleats, and there is a 110-volt outlet in the bed for your power tools.  There are also two lockable Titan boxes that can also be used as ice coolers for tailgating.  There are even cup holders when the lid is open, and if you need more cargo room, they are removable.

If you need your bed lit up at night, that is no problem for Titan.  There are a total of eight LED lights in the bed, including lights under the bed rails.

This is an outwardly pretty truck, with a great interior, but the question people who tow want to know is how capable is it?

If you get the two-wheel drive S model, it will tow 12,300 pounds.  However, if you get this Platinum Reserve model with 4-wheel drive, towing is cut to 10,600 pounds, which is low, even for most half-ton trucks these days.  However, this truck will way out-tow the Ram EcoDiesel 6-cylinder that tops out at 9200 pounds, but the Ram will get you 30-MPG on the highway.

To get the towing numbers up, Nissan equipped this truck with a 3.92 rear axle, but that had an adverse effect on fuel economy.  Here is where it gets tricky…Nissan got the gross vehicle weight rating (GVWR) to over 8500 pounds, so that makes the truck exempt from EPA fuel economy ratings.  That was a very smart move on Nissan’s part to make a heavy half-ton truck without having to disclose the miles per gallon.

In my own testing, the Titan XD got just over 16 miles per gallon in half city/half highway driving, holding my speed to 65-miles per hour tops.  If there is a problem with this truck, the fuel economy is where it comes up short with competitors.  To make it worse, it only has a 26-gallon tank, so if you are towing something and only getting 11-12 miles per gallon or less, you are going to be spending a lot of time at diesel pumps.

So to summarize this truck, size-wise, it is somewhere between a half-ton and ¾ ton truck, but doesn’t have the towing or fuel economy you get with most diesel ¾ ton trucks, so it is a bit of a mixed bag for me.   It probably won’t work for larger travel trailers, horse trailers, or boats, so you have to wonder why someone wouldn’t just get a half-ton truck for the better fuel economy and more towing capacity.  The one real plus of the Titan is this Cummins 5-liter should make it to 300,000 miles, and very possibly more.

MSRP on this truck as equipped is almost $62,000 and that is quite a bit less than the top of the line models of the competition, but again, all those will tow 50% more minimally.

The Titan XD does drive very well, it has some neat features, and the engine is quiet inside the cab.  There is no doubt it is the best Titan made by far, but I don’t see any reason for the F250, Silverado 2500 or Ram 2500 diesels to be afraid.