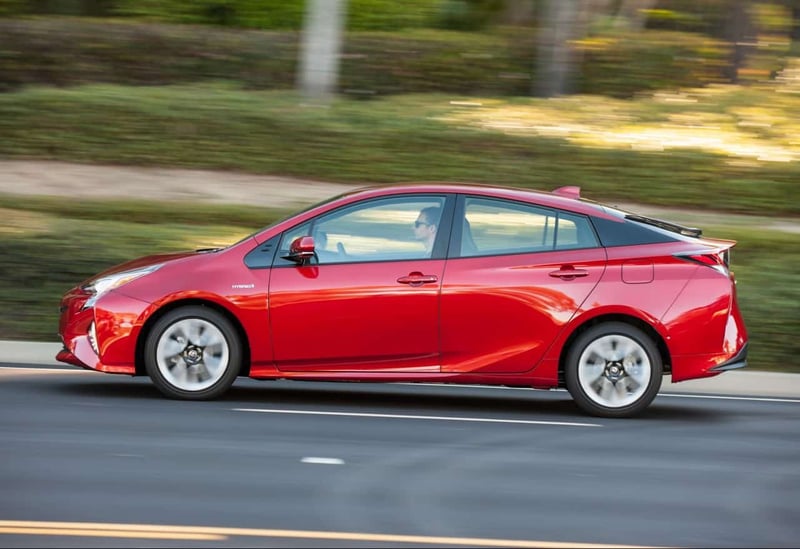 In the world of hybrid electric cars, none has been more successful than the Toyota Prius.  Debuted in 1997, over 3.5 million people have purchased the Prius hybrids.  Now for 2016, the fourth-generation Prius is completely redesigned from bumper to bumper.

Changes to the 2016 Prius include a more aggressive exterior and a new interior.  It is 2-inches longer, a half-inch wider, and it sits an inch lower to the ground.  Also of significance is a huge change in the suspension system to give it a better ride, as well as better handling, neither of which has been a strong point of past Prius models.

Under the hood, you’ll find a 1.8-liter 4-cylinder engine, and an electric motor that powers the Prius to 121-horses, but with the CVT transmission, it feels like a lot more.  The Prius takes off with strong acceleration but lacks a little at cruising speeds. When you consider the fuel economy, however, the power overall is more than adequate.

The cabin for 2016 is larger and it is more comfortable, but we must address the elephant in the room, which is the bright white center console that made me jump back when I opened the door.  It matches the area around the gear shifter and on the bottom of the steering wheel.  Maybe it is something you get used to, but I suspect it will take a little time.

Another oddity is when you are sitting behind the wheel, there are no gauges right in front of you, something I’ve never seen before.  Instead, there is a large, sort of wrap around console on top of the dash that gives you speed, driving data, and fuel economy info.

Just above the rather odd gear shifter is a 7” color touchscreen where you operate all the audio, apps for navigation system, real-time info, connectivity for Bluetooth, etc.  Just below that are the air conditioning controls.  Overall, everything is actually very easy to operate and makes good sense.  The color monitor also serves as a terrific rearview camera. There is even a built-in phone charger in the center console.

My tester has the $1700 Premium Convenience package which gives you navigation, a JBL stereo with 10-speakers, voice recognition, parking assist, lane departure warning, Intelligent parking assist, and a cool feature called Intelligent Clearance Sonar, which will stop the car if you hit the accelerator by mistake when approaching a stationary object going forward or in reverse.

There is no doubt this is the best driving Prius yet, it is the quietest, and has the most trunk room.  We lost just a little bit of back seat room with the redesign for 2016, but it is still OK.  The back seats fold down for more trunk space if needed.

Most hybrids lose a good amount of trunk space due to the battery pack, but with Prius, the new, much smaller lithium ion battery fits completely under the back seat.

In years past, people bought the Prius either for the fuel economy or because they were environmentally conscious.  I don’t think anyone purchased them because they were overly beautiful or drove great, but that may change with this model.

Fuel economy is rated at 54 in town and 50 on the highway, which is terrific.  In over a hundred miles of mixed city and highway driving, and honestly, not trying to see how good the mileage could be, the car averaged 61 miles per gallon.  That is incredible mileage, and in fact, Prius is the all-time fuel economy leader in cars that do not plugin.

If you want superior fuel economy and a very enjoyable car, you’ve got to put this new Prius on your shopping list.  MSRP on this ultra-loaded hybrid is $32,540.

Prius in Latin means superior, and there is simply no doubt, this is the benchmark for all hybrids.