The 2018 Honda Clarity Is A Futuristic, Fuel Efficient Plug-In Hybrid 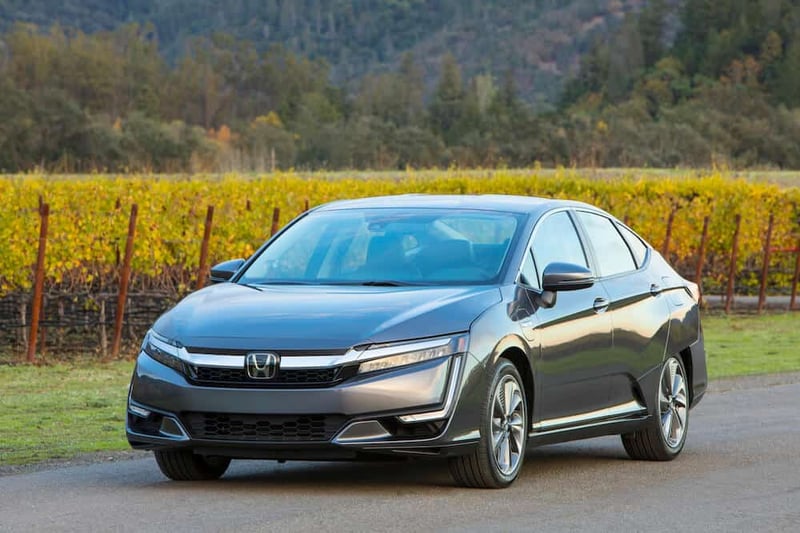 Sometimes, the future plops down in your driveway like paint on an abstract canvas.

My glimpse of the murky road ahead came courtesy of the avant-garde 2018 Honda Clarity, a plug-in hybrid that radiates spacey wrapped in strange.

If I cocked my head just right, I could see a confounding new age sedan seasoned with a dash of French “styling” and even a sprinkle or two of early ‘60s Dodge.

It kind of looked like a taxi from a distant planet.

Then I realized that unlike me, the Clarity is tweaked for the 2020s, sort of a rolling vision of the unknown, I guess.

Get this: The Clarity, a new model for Honda, comes in three variants: the plug-in hybrid I had recently, as well as fuel-cell and electric versions, and this will likely be just the start. Honda also offers the Insight, a conventional hybrid that I’ll tell you about in the weeks ahead.

Over the next five years, for better or worse, virtually every kind of vehicle – including big pickups and SUVs – will be electrified in some way to improve their fuel economy.

My Clarity, for instance, relied mainly on a 181-horsepower electric AC motor for power, supplemented by a 1.5-liter four-cylinder engine used mainly to generate electricity for the AC motor – kind of like the Chevy Volt.

Honda, however, wants to make sure no one mistakes its serial hybrid for Chevy’s.

The awkward front end on my silver Clarity – which is slightly larger than an Accord -- extended beyond its front wheels, defying convention with a broad, flat grille that appeared to hang out way too far.

Long, thin headlamps on either side were almost obscured by a chrome bar running through the grille and atop the headlamps.

The sides, though, looked about as chaotic as a Tesla board of directors meeting these days.

While basically flat, they were streaked by a strange line above their rocker panels that dipped down at the back door to join some sort of diagonal vent in front of the rear wheel.

Another line low on the rear fender plunged to a hump around the diagonal vent, while the back wheel-wells were squared off like something on an old Citroen.

At least all of it clung to good-looking gray-and-alloy 18-inch wheels wrapped with reasonable 235/45 tires.

Like a pure electric car, the two-ton Clarity has no transmission, able to get by just fine on direct drive to the front wheels.

Thanks to the instant surge of torque from the electric motor, the $37,000 sedan stepped away from stops with smooth authority, accelerating easily to city speeds.

Although vastly more responsive than a Toyota Prius, the Clarity is nowhere near as quick as some Accords, requiring 7.7 seconds to reach 60 mph even with brief high-end help from the four-banger, according to Car and Driver. (Total horsepower from both engines is 212.)

If you treat it nicely, though, it should average about 44 miles per gallon in hybrid mode and the equivalent of 110 mpg in electric.

The Clarity also seemed pretty agile around town, absorbing bumps with a fluid, athletic suspension that gave the car a taut, near-luxury feel.

Body-lean was well-controlled at moderate speeds and the car’s steering was quick and well-weighted, just don’t push it. Unlike more conventional Honda Accords and Civics, the Clarity dove clumsily into corners at speed and felt unhappy.

Still, it was a pleasant cruiser, helped considerably by a spacious black interior that was not as full-on Buck Rogers as the exterior.

Well, not quite, anyway. The upper dashboard in my Clarity, for example, included a squared-off hood over the instrument panel that shielded gauges so obscure I mostly ignored them.

I guess I could have been under an electron load-alert or something, for all I know.

The speedometer, fortunately, was a digital readout, while the Clarity’s protruding mid-dash flashed a swath of dark-gray wood with a thick strip of black suede beneath it.

Meanwhile, a horizontal display screen was mounted flatly to the mid-dash, housing another one of Honda’s bad idea stereos controlled by touchpads on the screen.

C’mon, Honda, you can do better than that.

Though the Clarity is direct-drive, its thick console – trimmed in more of the gray wood – contained familiar Acura-style buttons for park, reverse and drive.

The black door panels, of course, were mostly plastic, but trimmed with classy suede centers and fitted with padded armrests.

In addition, the back seat of the Clarity provided enormous leg- and headroom, giving owners of the sedan the option of Ubering tipsy boomers and clueless millennials for spare change. My people.

In a bit of a surprise, my well-appointed Clarity did not boast of a single option, but it said plenty about where Honda and Toyota and Ford and GM may be headed in the near future.

I suppose I’ll bum a ride with one of them. Maybe. 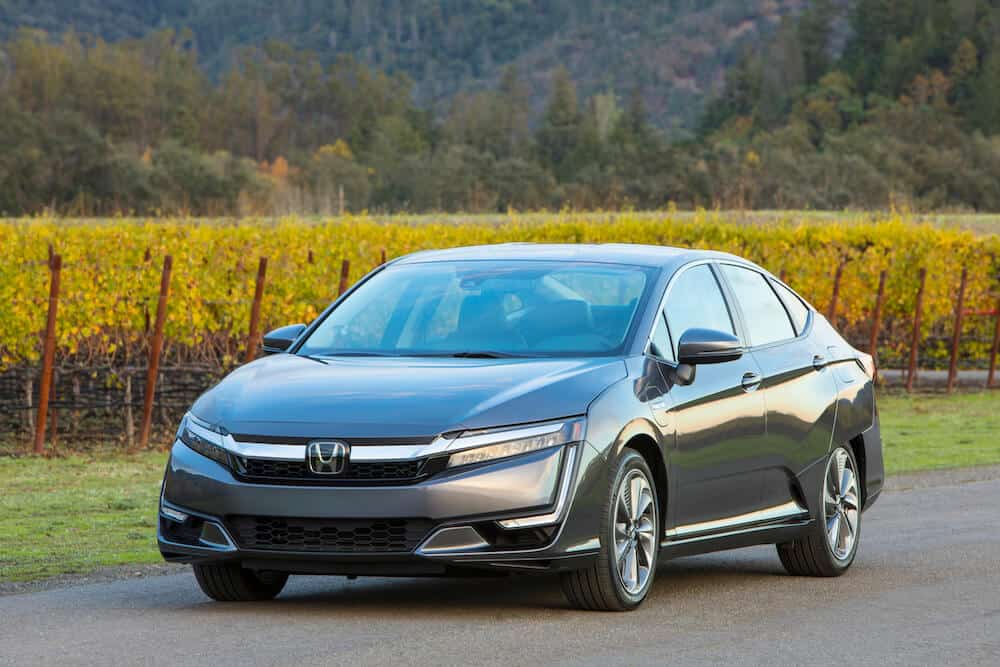 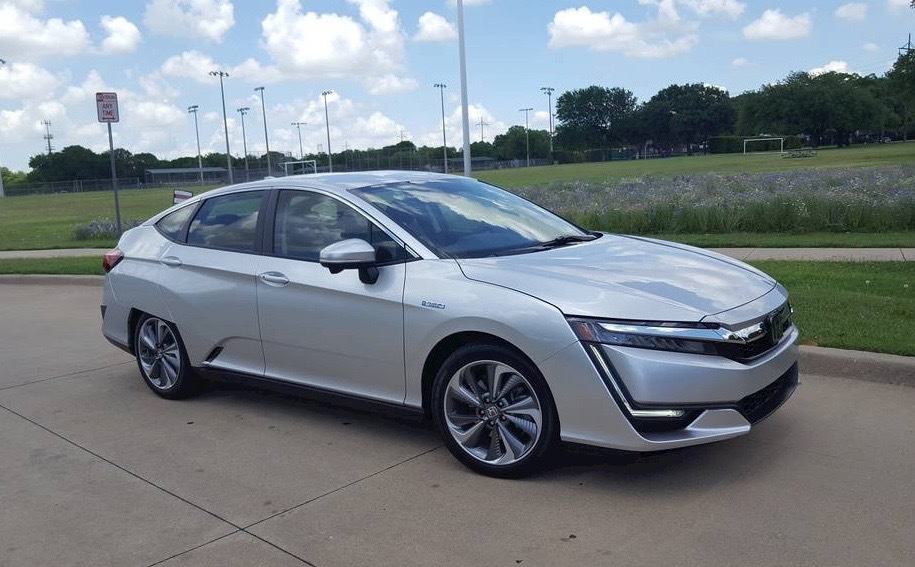 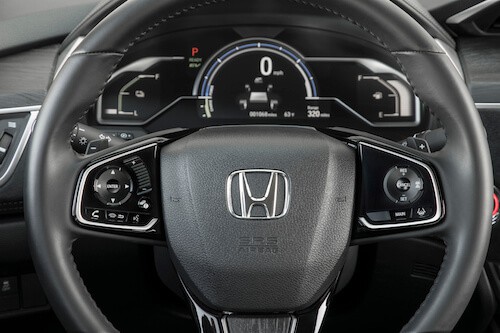 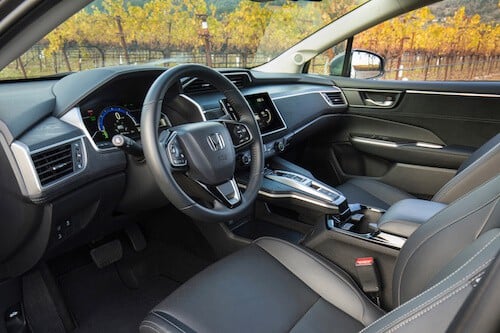 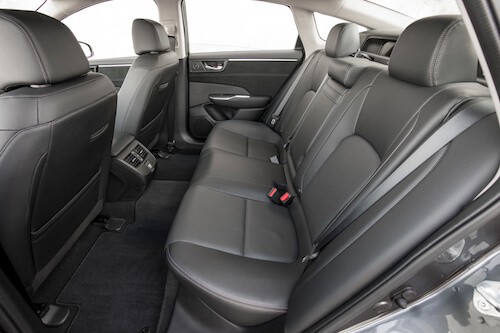 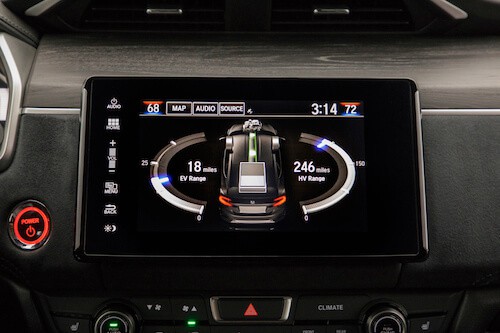