The 2018 Kia Niro Plug-In Hybrid Is A Nice Surprise 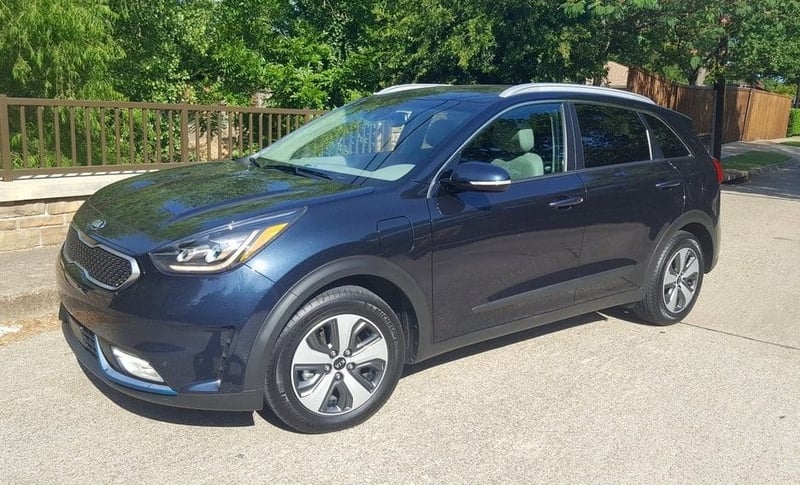 Four inches of dreary rain doused every candle on my birthday cake – all three levels of them.

Drat. Then, my grandkids gave me a card with a great, intense-looking dog on the front and a caption inside that said, “Do I smell old people?”

Once again, no new Ferrari – or even cologne, but at least I found a few nice surprises in the 2018 Kia Niro Plug-in Hybrid Electric Vehicle, as well as a fairly pleasant taste of the future I seem hell-bent to reach.

It was as unexpected as, say, Stormy Daniels bursting from my soggy cake.

While nice-looking in a tidy way, the compact dark-blue Niro crossover I had recently just didn’t look like the sort of vehicle to deliver many grins.

Whoopee. As I have told several of my dates, modest looks and stature can be deceiving.

Actually, like most Kias these days, the Niro sported some nice styling touches.

Kia’s signature “tiger-nose” grille, for example, graced the front of the Niro, complemented by spare-looking headlamps that wrapped back onto the tops of short front fenders.

A faint blue outline on the edge of the lower grille hinted at the Niro’s green-ness, while slight curves in the fenders and doors and a few crisp definition lines gave them a bit of muscle.

The top provided another dash of spice, curving sleekly from front to rear with a flat silver “rail” on top that appeared to sort of mimic a luggage rack.

As you probably know, plug-in hybrids like the Niro combine elements of a conventional hybrid with those of an electric vehicle.

Like all hybrids, my front-wheel-drive Niro featured a gas engine – a 1.6-liter four-cylinder – assisted by a 60-horsepower electric motor to help the little engine achieve decent fuel economy.

In addition, the Niro offers a separate system that permits 26 miles of driving in all-electric range with the push of a button – and requires frequent recharging if you use it often.

I mostly stayed in hybrid mode, though the electric side of the $36,000 vehicle does enable you to sneak into the driveway at night when you’re, uh, two hours late.

With a mere 139 total horsepower, the 3,400-pound Niro appeared to be about as exciting as a four-hour Sunday sermon after a long Saturday night (see paragraph above).

As a result, the Niro drives much like any regular crossover, aided by the push and shove from 195 lb.-ft. of torque, the force you feel when accelerating.

Though hardly sporting – even in sport mode – the Niro felt willing and kind of lively, jogging to 60 mph in an adequate 9 seconds, according to Car and Driver.

I had no trouble merging with traffic on the three or four Autobahn-like expressways around me, which typically feature lots of high-speed one-hand driving while texting.

Even better, the Niro rode and handled pretty well for something that competes with the Toyota Prius, mostly resisting the excessive body lean that can make crossovers and hybrids seem clumsy.

Its steering was reasonably quick, too, though a bit numb.

In electric mode, the instant torque from the motor made the Niro feel even more responsive, but with a 26-mile range, it tended to be short-lived.

When the spark is gone, the Niro reverts back to a gas and electric hybrid – kind of like an instant divorce.

Meanwhile, the spare theme of the Niro continued inside, where its light-gray interior was fairly basic, but well-executed, providing 19 cubic feet of storage space behind the back seat.

A mostly flat gray dashboard, for instance, rolled down to a mid-dash area in contrasting flat black with more blue trim around the vents.

A refreshingly minimalist 8-inch display screen had knobs for the audio and climate systems and included Android Auto and Apple CarPlay capabilities.

While dipped heavily in plastic, the door panels featured upper panels in gray and lower sections in black, matching the lower half of the dashboard.

Although the Niro won’t likely be ripping around corners at a track, its gray seats had supportive bolsters and perforated centers, while the seat in back offered Uber-worthy leg- and headroom.

My cost-conscious Niro arrived with one option: carpeted floor mats ($135).

I promise I’m not going extreme green on you, but the fact is that within the next five years, we will all probably be forced to live with hybrid powertrains in new vehicles.

If the feds and automakers are going to push them on us, it’s encouraging to see how good and seamless they are getting – a whole lot better than birthdays. 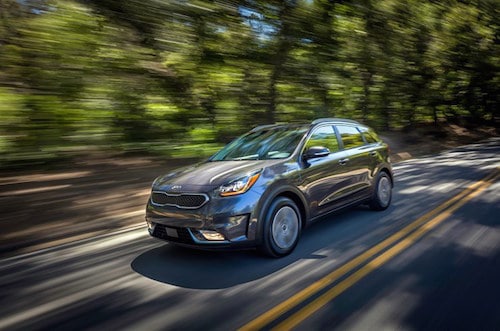 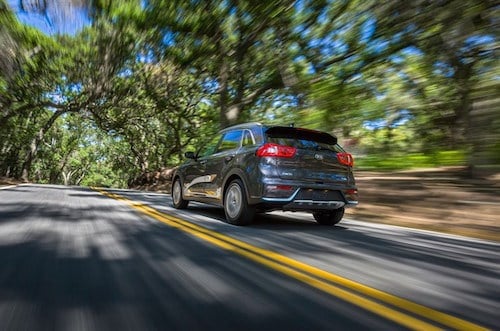 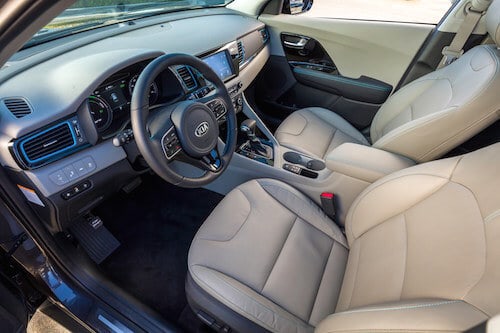 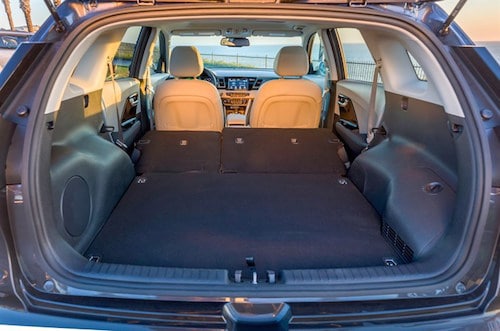 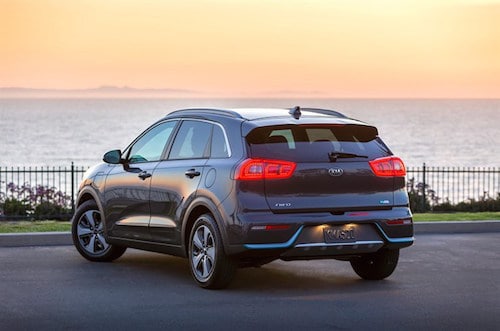