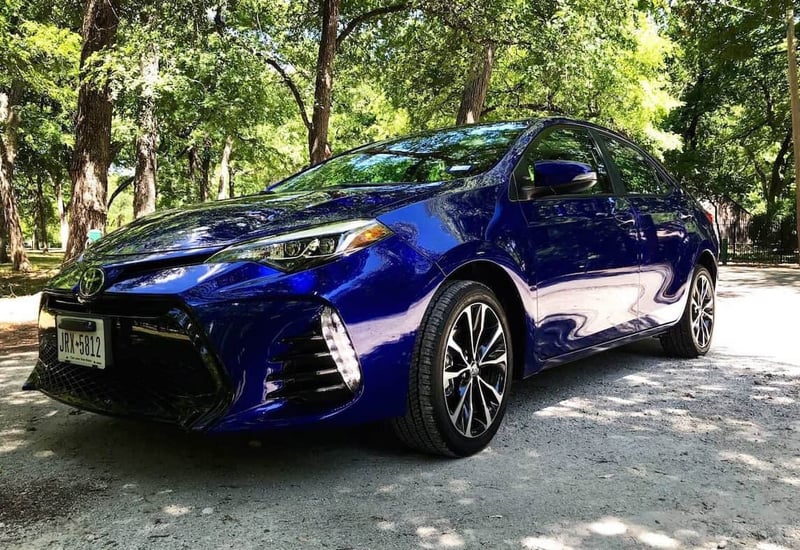 There are a lot of vehicles you think of when you think of a stick shift. But for me, admittedly, the Corolla isn't the first one that immediately comes to mind.  So I was a bit surprised when the 2018 Toyota Corolla that showed up in my driveway recently sported a six-speed and some attitude.

The Toyota Corolla is undoubtedly a hugely successful car. The best-selling in the world in fact. It's sold more than 44 million worldwide since 1966.  You can immediately understand why when you get behind the wheel. Toyota delivers reliability, safety, and just enough interior comfort at an affordable price that makes it a value that's hard to pass up in the compact sedan segment.

The SE is one of 6 trims and the only one to offer an available 6-speed manual (the others feature Toyota's CVT.) Full disclosure here, I don't drive stick shifts a ton, but my first car was a manual Honda Accord and I've driven a handful of manuals lately including the Ford Mustang GT, Mazda Miata, and Honda Civic Type R. That said, driving a stick on a daily basis felt a bit laborious at first, but grew on me over the course of the week, and dare I say became fun.  But I never got to where I'd call the 6-speed smooth. I felt like a vague clutch resulted in more engine-revving than I anticipated, based on my other recent experiences. Especially when it came to reversing. Once past those issues, I enjoyed the SE's actual handling and front-wheel drive tight turning radius. The ride felt sporty without being punishing. Under the hood, the Corolla's 1.8-liter 4-cylinder delivers 132-horses, which can't compete with the undeniably more powerful Civic and Mazda3.  Still, the SE didn't jump out at me as being completely underpowered, likely due to its 2,860-pound curb weight. It delivers 128 lb-ft of torque.

If you're into edgier style, I think the SE does the job nicely. Its sportier status comes with larger 17-inch machined alloy wheels with black accents, along with a gloss black mesh pattern grille, rear spoiler, and chrome-tipped exhaust. You also get color-keyed heated power outside mirrors with turn signal indicators. The first thing I'll say about the interior - it's way roomier than it appears. I couldn't get over how much legroom and headroom greeted me both in the front and back seats. Quality-wise, the cabin falls right in line with its $22K price tag.  While there are soft-touch surfaces on the dash, door armrests, and center storage area, there is also a lot of hard plastic.  The sport bolstered fabric seats, trimmed in leather-like SofTex, get my thumbs up for their surprising comfort as does the contrast stitching throughout the interior. So, too, does the SE's exclusive chrome-plated premium instrument cluster with its 4.2-inch color display. Everything is user-friendly, from the steering wheel controls to the easy to operate single-zone digital climate control buttons. I must say the A/C was outstanding in the 100-degree summer heat blasting out of the round cockpit-like air vents coming at you from the side. The SE comes with remote entry and keyless start. There is one USB port in the front along with one 12V outlet. My test model added the power tilt/slide sunroof along with a quality leather-trimmed telescopic 3-spoke steering wheel. A backup camera is standard on all Corollas. There is no Apple CarPlay or Android Auto connectivity to be had (however, Toyota is starting to roll out Apple Carplay in some of its 2019 vehicles.) Toyota's Entune system runs the infotainment show with its 7-inch display. It's actually the best multimedia screen in a Toyota I've come across lately. A bit less sun glare and brighter resolution.  But I don't know what designer thought surrounding it with the glossy black surface area was a good idea. It's the biggest lint attractor I've ever seen. My SE came with Entune Audio Plus Navigation App and a multimedia bundle. Cargo space is great, at 13.0 cubic feet in the trunk, and you get a 60/40 split. Note, the SE doesn't offer any factory options.

The comfy sports bolstered fabric seats I mentioned earlier - in Mixed Media trim and trimmed with SofTex - are my favorite feature. I also like where designers put the audio speakers. Two of the 6 are placed level with the door side mirrors to project at ear level. The other cool feature is outside on the door handle. There's a sensor you simply press to lock the doors, without using your key fob.

As I alluded to earlier, the Corolla, which isn't often considered exciting, is nothing if not a fantastic value proposition.  The SE adds a bit of the fun to drive factor so I think the SE's $22,834 price tag is right on the money for what you get. The 2018 Corolla is also the top-ranked compact car in the J.D. Power 2018 Initial Quality Survey released this week. Note, Toyota is about to roll out the first model of the 12th-generation Corolla - the 2019 Corolla Hatchback. It goes on sale this summer and you can check it out in the video below. Also available with a manual, it rides on Toyota's new platform. 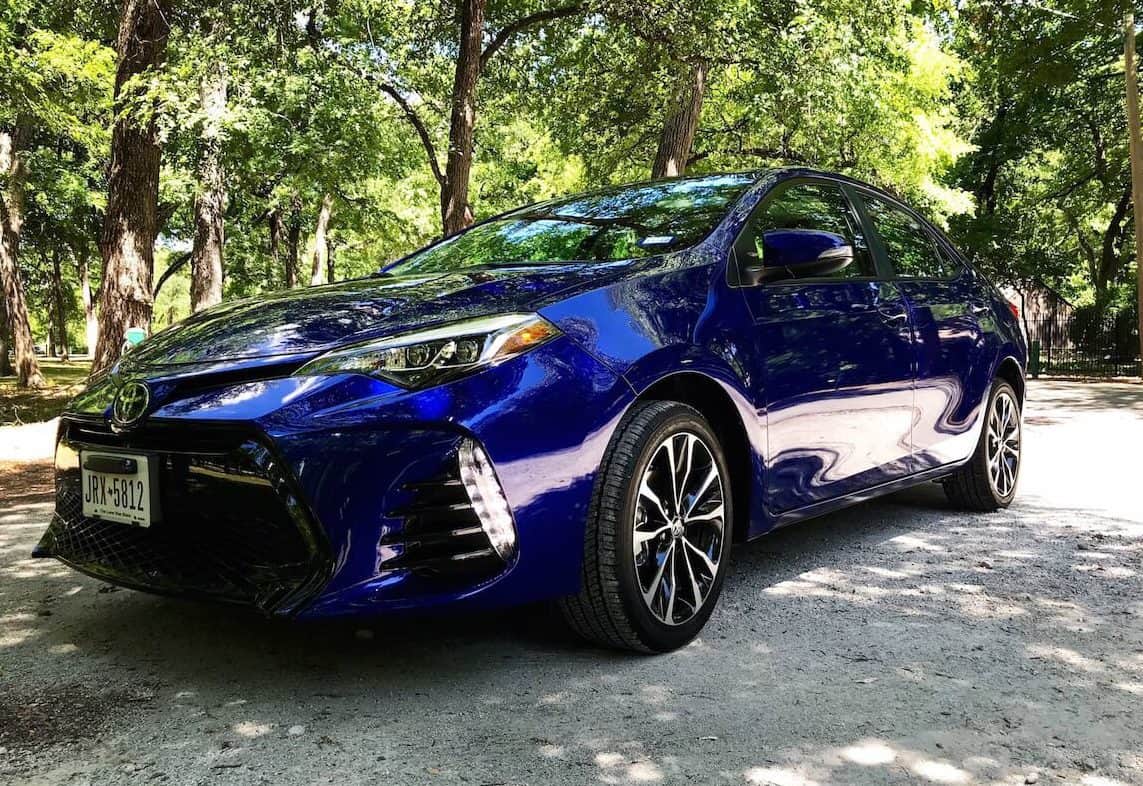 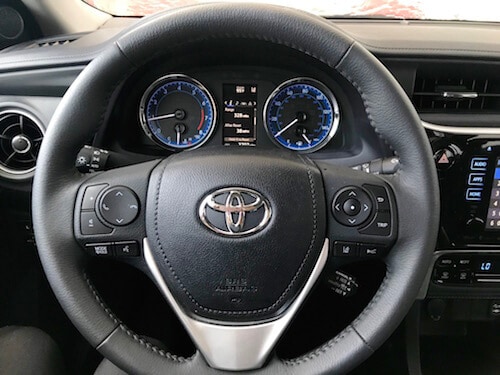 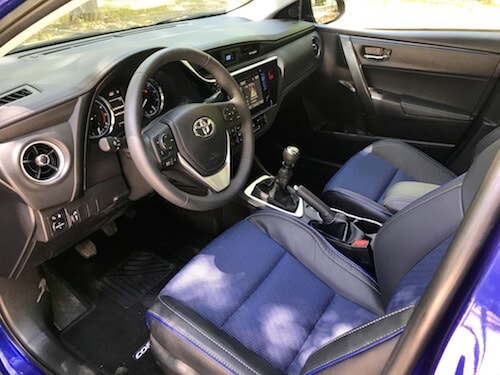 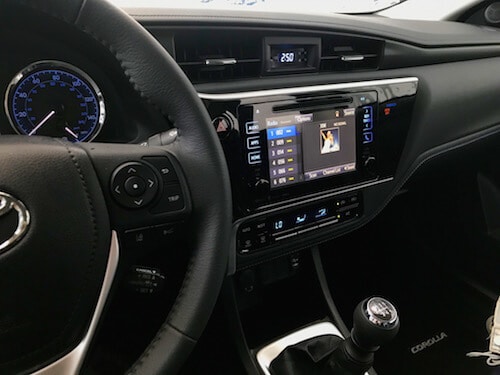 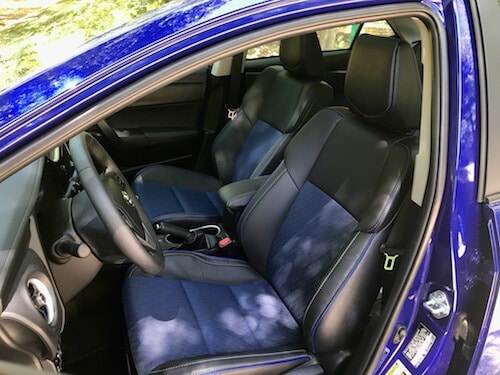 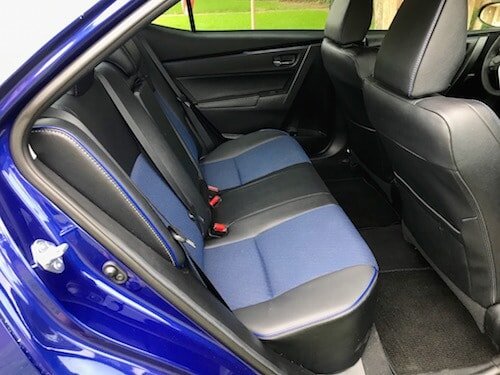