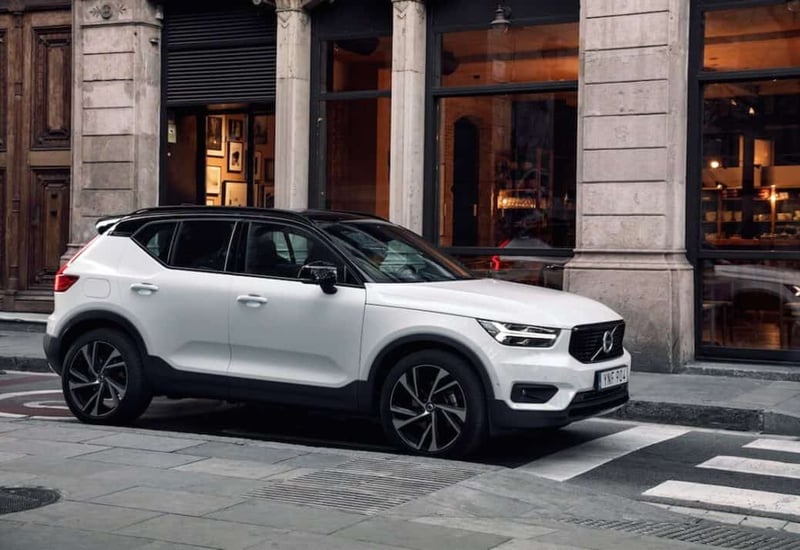 Crank up Country Joe and the Fish, dude.

Like those days 50 years ago, the XC40 just seems to celebrate all things free spirited.

Actually, though, you don’t have to be odd or an old hippie to appreciate the XC40, which joins a growing lineup of appealing crossovers and cars from the Swedish automaker.

Stylishly square with a familiar short, blunt front-end, my XC40 – a $46,000 near-luxury R-Design model – will face heavyweights like the BMW X2, Audi Q3 and Mercedes-Benz GLA.

However, the little Volvo packs a punch of its own.

A broad hood with subtle character lines sported a tiny rubber Swedish flag hanging from the left corner of the hood, while the rear side-windows curved up along a thick, kind of Euro-Asian-looking roof pillar.

Although the sides were typically Volvo-flat, they flashed deep scallops down low above the rocker panels that tightened things up.

Moreover, the top of the XC40 was painted black -- like you might find in a Mini Cooper – and those thick rear pillars wore Volvo’s huge vertical tail lamps.

It won’t be mistaken for a Lexus or a BMW.

Though the 2-liter turbocharged four-cylinder beneath the XC40’s hood wasn’t quite as distinctive as the rest of the vehicle, it felt plenty spicy most of the time.

With 248-horsepower and 258 lb.-ft. of torque, the mini-Volvo bounded from stops with a decent little belt of torque to the back, sprinting to 60-miles per hour in a quick 6.2 seconds, according to Car and Driver.

The lusty little motor was tied to a clunky 8-speed automatic that shifted clumsily, even holding the XC40 in place so firmly during stops that I had to put my foot on the accelerator lightly to break it free.

Weird – but then, so was Jerry Garcia.

Fortunately, that was the 3,900-pound, all-wheel-drive vehicle’s main drivetrain quirk.

Most of the time, the engine lived up to its spirited promise, flattening out some beyond 5,000 rpm like many small turbo motors do.

It also should deliver 23 miles per gallon in town and 31 on the highway.

Better still, my XC40 turned into corners crisply with its stiffer R-Design suspension, leaning some only when pushed pretty hard.

As a modern vehicle with electrically assisted steering, the steering in the XC40 was numb and light, but very quick.

And of course, with a fairly tight, sporty suspension, the XC40’s ride varied from well-planted to fidgety, getting kind of bouncy on bad pavement.

Still, I wouldn’t be reluctant to take it on a long trip.

Besides, that would give me more time to soak up the vibe from that orange carpet – best sampled with a good strong dose of Drive-By Truckers.

That could prove challenging, though, if you’re not part of the iPad generation. The XC40’s major interior flaw is a truly terrible 12.3-inch display screen that controls most audio and climate systems.

As a non-iPadder, I had to call a Volvo rep to find out how to turn on the stereo – a first in 27 years of dealing with cars. Honestly.

You have to put your fingers on the screen and slide it to the next screen, which shouldn’t be at all distracting when blowing down the freeway at 75. (And by the way, the owner’s manual is buried somewhere on one of those screens as well, I was told.)

Fortunately, the rest of the interior was more thoughtfully conceived.

A flat black dashboard in smooth plastic featured an instrument panel shaded by two hoods, one overlapping the other.

The dashboard dropped down to a squared-off mid-dash trimmed in a nifty silver plastic that looked like a highly stylized metallic band.

Meanwhile, sculpted black-plastic door panels showed off recessed centers in a textured orange material that matched the carpets and more or less fit with the vehicle’s fine black seats with suede centers.

Just in case you have friends who favor turbans or chartreuse top-hats, the XC40 offers good leg-room and excellent head-room in back.

Despite its quirks, the XC40 absolutely beams with personality. Another job pretty well done, Volvo, but you may want to hold off on any raises for the dashboard designers. 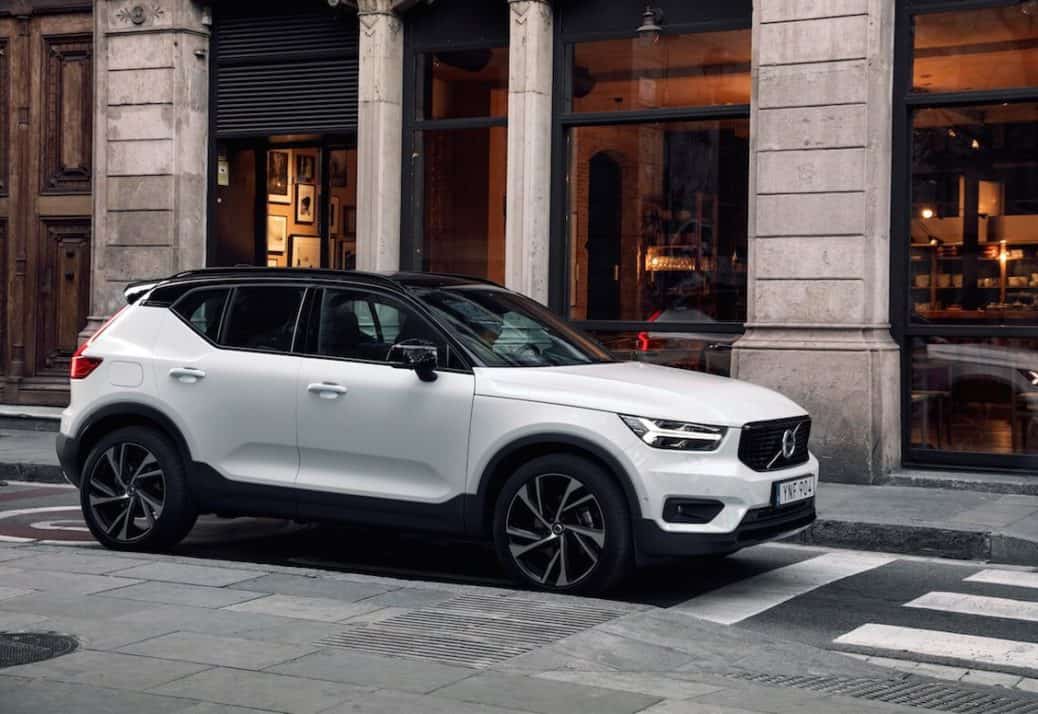 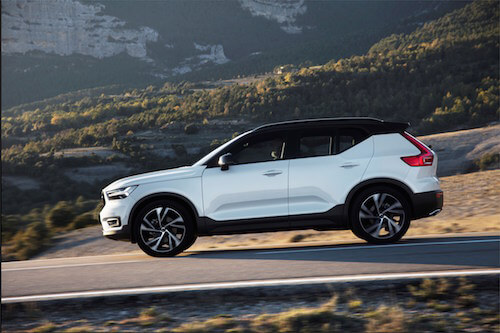 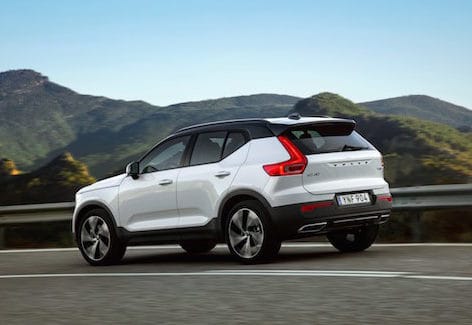 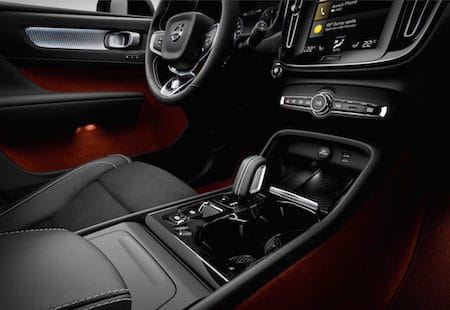 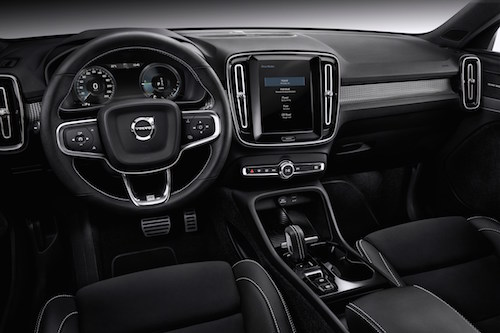 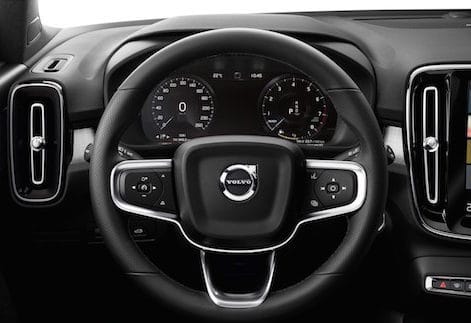 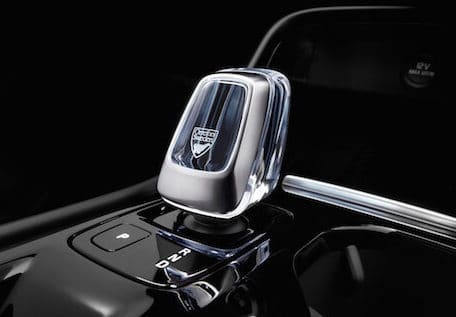 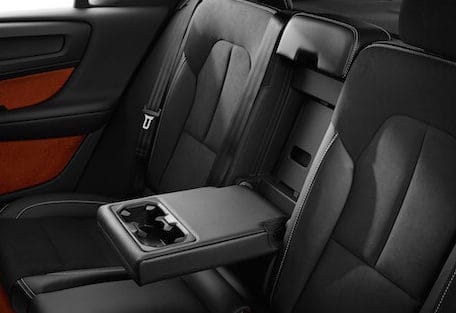 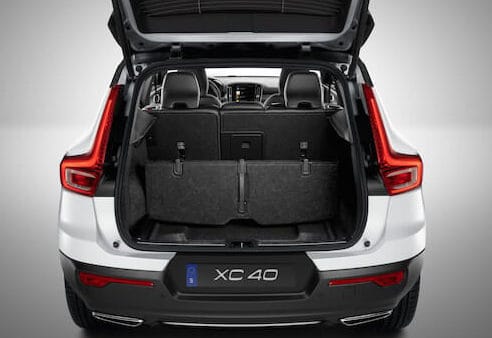 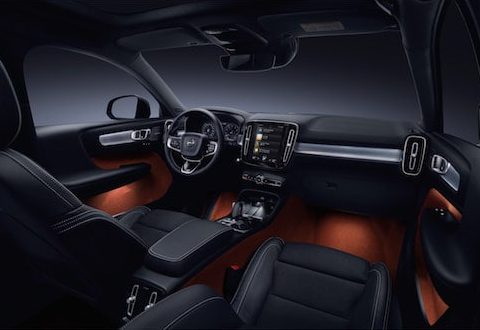 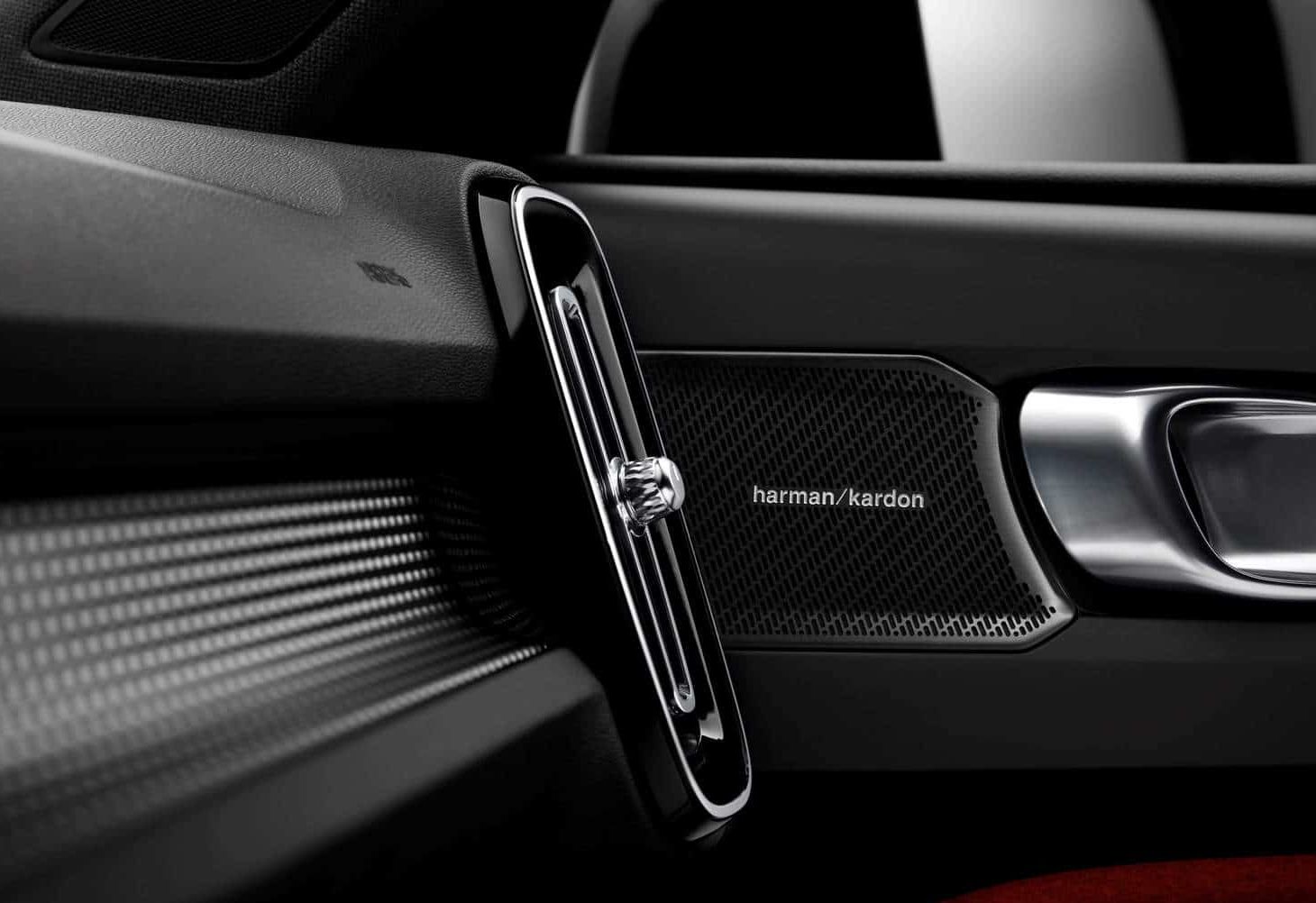 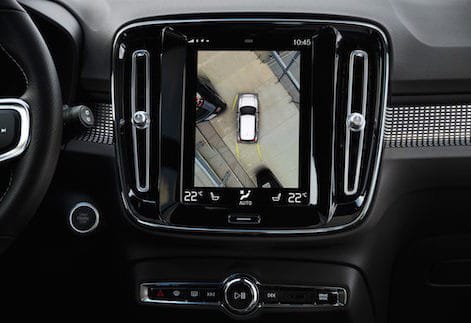