The 2020 Mazda3 Premium Sedan Is Tops In Its Class 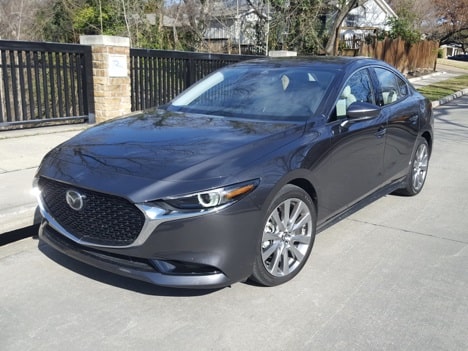 Loud, crude music – the stuff I used to crank up daily – rarely tumbles and crashes from the genteel interior of the 2020 Mazda3.

So much for my Frank Zappa and Moby Grape CDs, I guess.

Too bad. Small, fiercely independent Mazda wants to be viewed as a premium brand that can charge slightly more for its stylish – and mostly classy -- cars and crossovers.

Mazda’s challenge will be in convincing consumers that its vehicles are truly worth more than competing models from Honda, Toyota, Hyundai-Kia and even Nissan.

Nuances like excellent suspension tuning, a refined engine and really nice interior just don’t generate as much “wow” as red wheels or an 800-watt, windshield-cracking stereo.

Still, Mazda may be on the right path in its quest for higher revenue and profits – something a small auto builder must do to afford electrification and all the technology squeezing everyone in the industry.

My metallic gray Mazda3 sedan, for instance, looked and mostly drove like a premium compact sedan.

Its oversized blacked-out grille seemed bold but not exaggerated, flanked by sleek, scowling headlamps that were tied deftly to the grille with well-placed chrome trim.

Meanwhile, a broad, powerful hood gracefully topped the grille and headlamps, looking as if it might house something more potent than a 186-horse 4-banger – and maybe should.

Although the 3’s sides appeared smooth at first glance, they relied on some subtle surfacing to give them a distinctive muscular curve.

Likewise, the Mazda didn’t flash big tires and wheels, but its sleek body was pulled down pretty tightly onto 18-inch spoked wheels and 215/45 tires.

As always, though, the punch from the 3’s 2.5-liter four-cylinder engine didn’t quite match the promise of the car’s slippery, swift-looking exterior.

Smooth and expensive-feeling, the engine in my all-wheel-drive 3 responded nicely around town, leaping quietly away from stops with some verve. 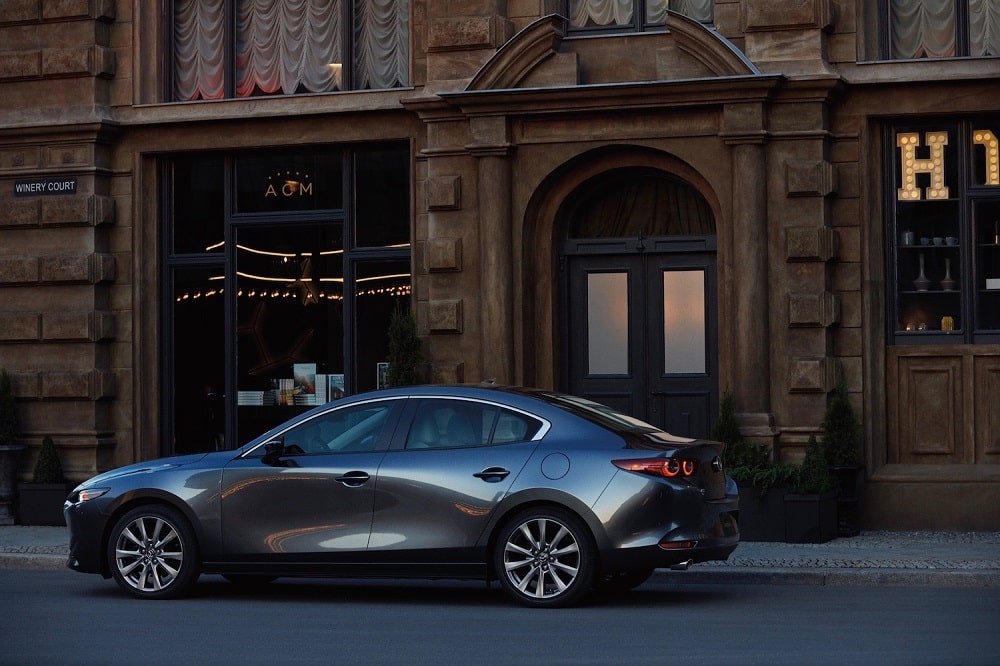 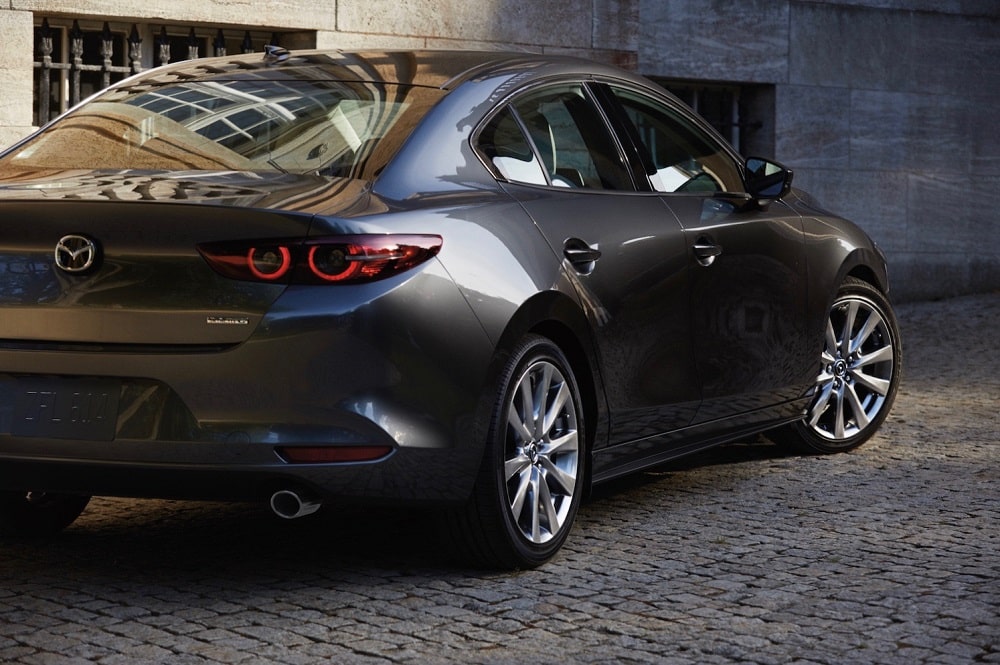 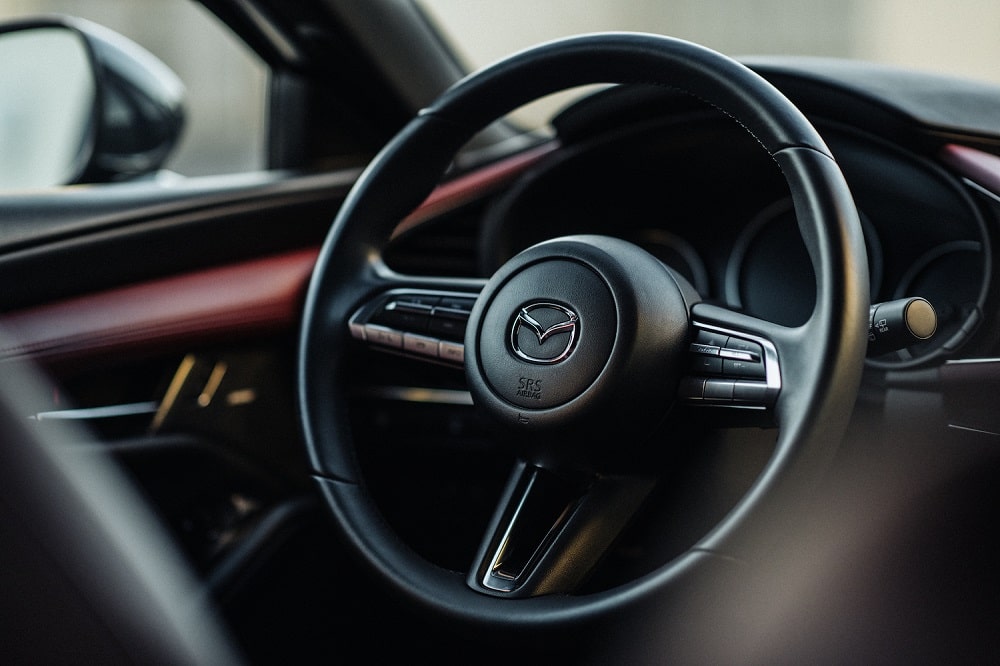 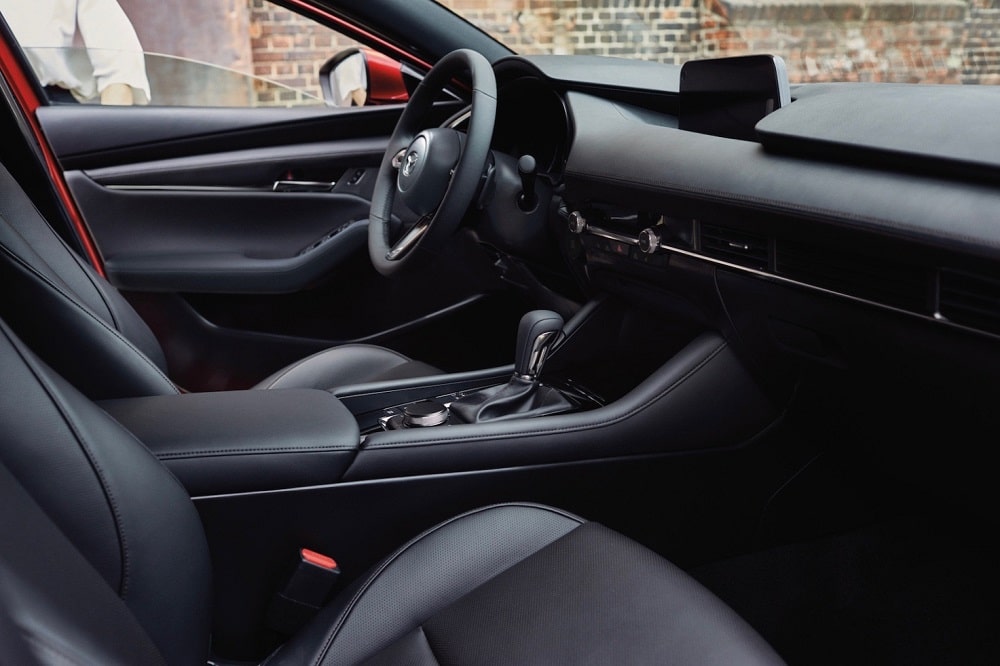 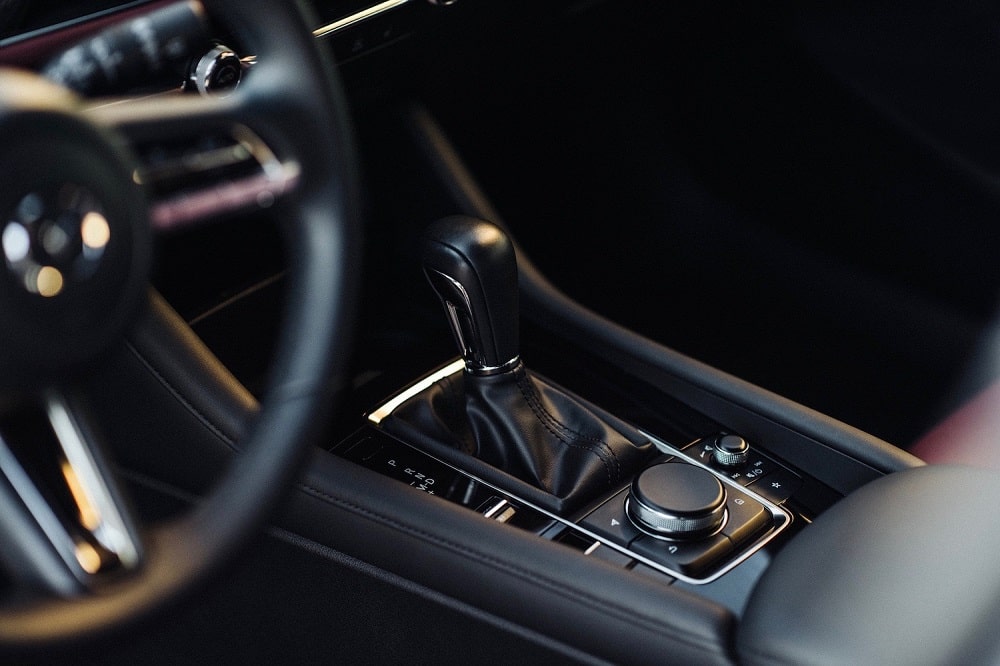 But it lost its lean muscle and grit at speeds above 50, feeling flat and a bit lifeless under hard acceleration.

Oddly, the 3,100-pound 3 isn’t slow, able to accelerate to 60 mph in 7 seconds, according to Car and Driver, which is more than sufficient for merging onto freeways.

It just felt sluggish, despite getting able assistance from a well-tuned six-speed automatic that also helped the 3 achieve overall fuel economy of 28 miles per gallon.

Actually, the engine might not have been all that noticeable if the 3 hadn’t sported good handling and steering – better probably than some so-called sport sedans.

Bend the Mazda into a speedy curve and you can place the car where you want it with minimal body lean and good grip from the all-wheel drive.

The athletic suspension and stiff platform also provided a decent ride that was compliant without being soft.

Moreover, the 3’s steering typically felt better and provided more feedback than you find in some German sedans that cost twice what the Mazda does – about $31,000.

That high-end vibe resonated inside the 3 as well, which was stitched with a striking white-and-black interior.

A deep, flat upper dashboard in black, for example, wrapped around a recessed area occupied by a tablet-shaped 8.8-inch display screen.

Among its features were Apple CarPlay and Android Auto capability, while the safety systems included blind-spot monitoring and cross-traffic alert.

However, the audio system was maddening to try to tune, requiring clicking through multiple computer “pages” and thumbing through the owner’s manual twice.

C’mon Mazda. Going on blind dates is easier than tuning that blankety-blank stereo.

Fortunately, the rest of the interior was more inviting, with stylized black door-panels trimmed in a band of white.

Similarly, the 3’s white seats offered perforated centers and bolsters with adequate leg- and head-room in back.

Even with a polished, well-equipped car like the impressive 3, though, Mazda likely faces an uphill battle.

Trying to sell a premium-priced compact sedan in a truck-nuts world may require more firepower – like a turbocharger, which Mazda has used on other models.

But for the thinning ranks of buyers who still want a compact sedan, the Mazda3 might be as good as it gets.