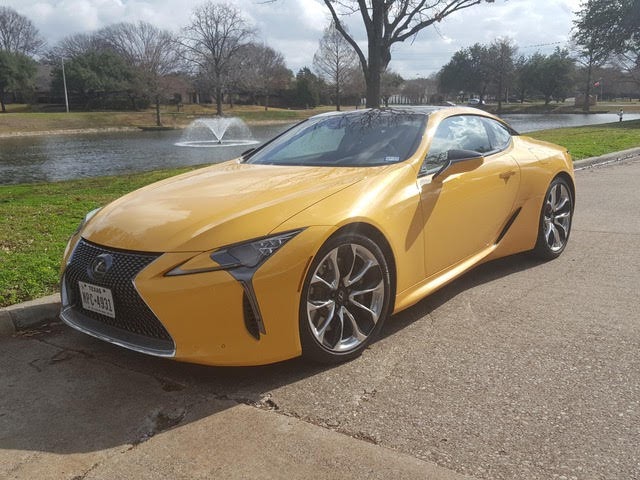 All my friends claim I’m too loud these days for a guy with gray hair and a Medicare card.

Blame it on the searing yellow 2020 Lexus LC 500 I had last week, a curvaceous, razor-cut luxury coupe with the spirit of an oversized sports car and the intoxicating bark of a muscle car.

Fine. Think of the stunning LC 500 as the grand anti-Lexus.

Even after four years on the market, the edgy, big-wheeled LC 500 still looks like the wild concept coupe created by Toyota’s Calty Design Research facility in Newport Beach.

I figure the stylists there must wear wetsuits under their work clothes so they can go surfing at lunch.

Regardless of where the inspiration for the LC bubbled up, it remains pretty rad, dudes and dude-ettes -- especially in polarizing Flare Yellow paint like the LC 500 I had recently.

Low and chiseled on its edges, the LC sported Lexi’s laughably oversized grille that somehow fit with the coupe’s swoopy front-end.

Despite the big L on the LC’s rounded rump, the two-ton coupe had the squat and stance of a Porsche – though not quite the performance.

Still, my favorite line on the stunning LC was formed by its slinky carbon-fiber top, which was squeezed at its base, making the rear fenders look even broader.

It sure didn’t look much like the sedate Lexus sedans quietly cruising the better streets in my neighborhood, and it definitely did not sound like any of them.

Though not as powerful as some six-figure GT coupes, my $107,000 LC featured a gloriously stout 5-liter V-8 with 471 horsepower.

Most of the time, the smooth, responsive engine burbled along city streets, rarely even disturbing the grackles on the power lines. 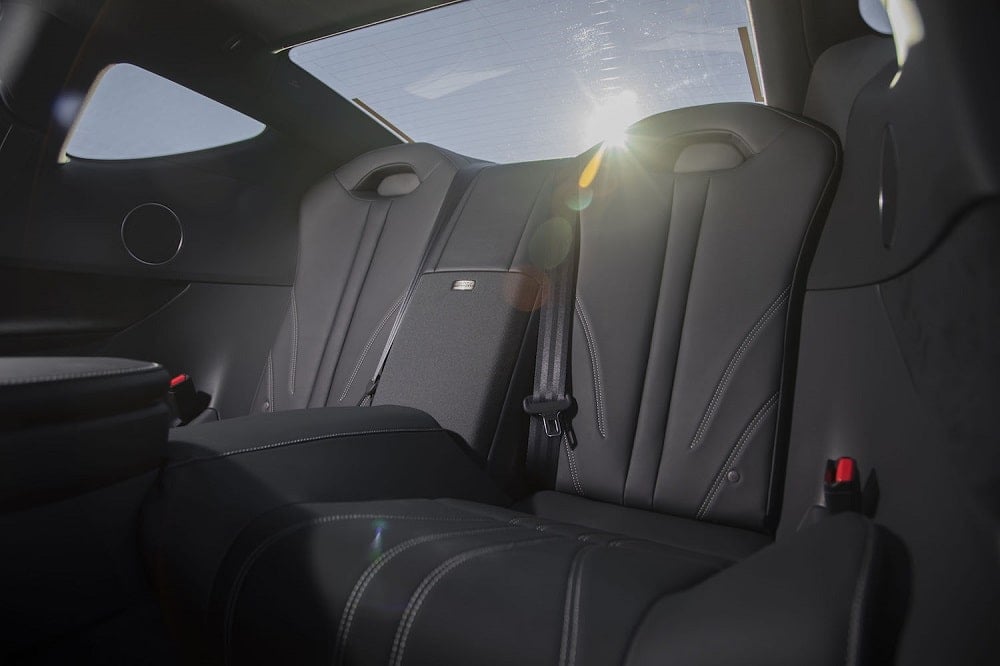 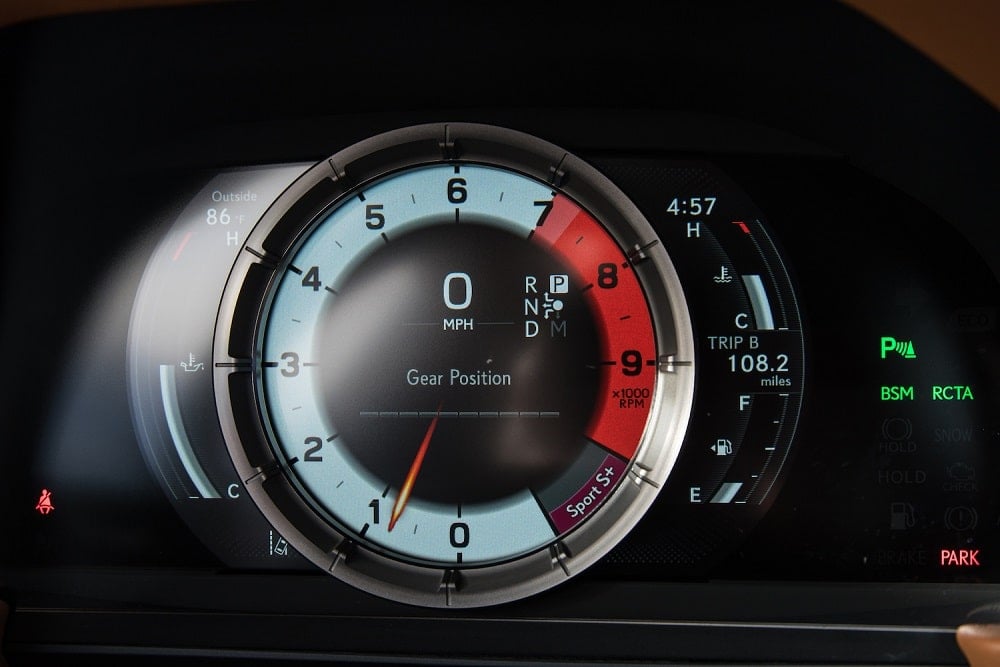 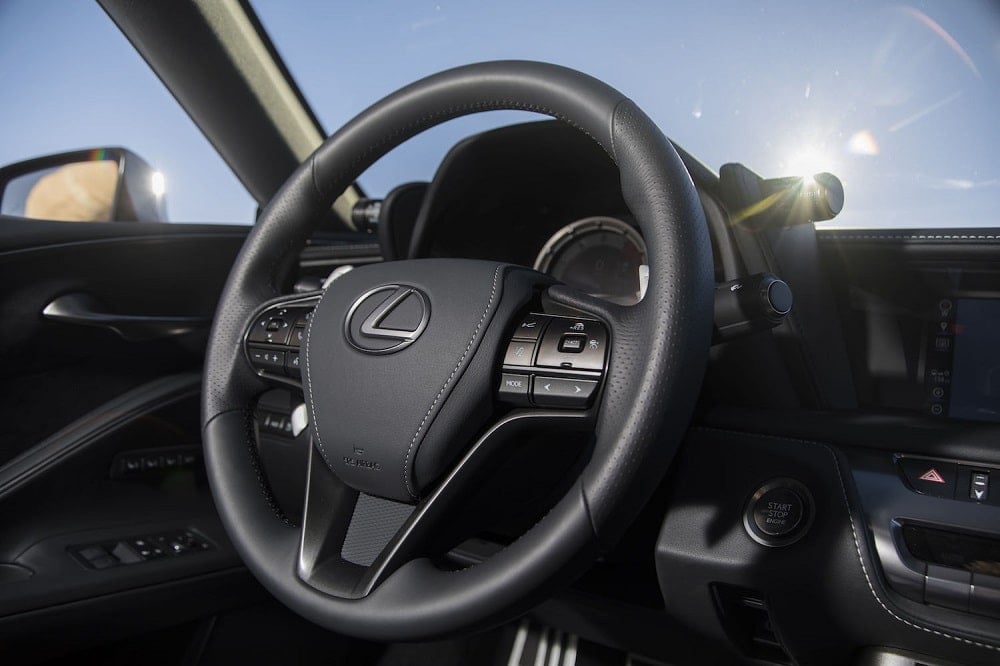 Push hard on the car’s long-travel accelerator pedal and the LC leaps to the spur, its 10-speed automatic quickly downshifting for more acceleration.

With a rich bellow that carried hints of NASCAR and a rumbling mix of ‘60s muscle cars, the LC sprinted to 60 miles per hour in 4.7 seconds, according to Car and Driver.

Of course, the thrills come at a price -- as they always do. Lexus’ razor-cut hot-rod musters only 19 miles per gallon overall.

However, while too heavy to be considered a sports coupe, the long-legged LC turned aggressively and flatly into corners with steering so quick that most required no more than a quarter-turn of the steering wheel.

It caught me by surprise initially, but I sort of warmed to it.

If pushed hard, the LC lost some of its composure, but most of the time in town, the coupe felt eager and willing.

Likewise, the car’s firm ride seemed largely out of place on a Lexus, transmitting clomp and pitch over expansion strips, but rarely exhibiting much jiggle or bounce.

As a result, though, it’s hard to classify the big coupe – neither all sport nor all luxury, but hey, you probably won’t care when you’re behind the wheel of the LC.

Lexus has steadily gotten better with interiors over the last decade and hits its stride with the black interior in my LC.

Among the features in there somewhere were Smart Watch and Alexa Skill integration and Amazon Alexa compatibility, as well as safety stuff like active cruise control, lane-keep assist and lane-departure alert.

The elegant dashboard eased down onto a broad console with a leather-bound grab-handle on its right side and a highly irritating electric shifter.

The balky device often insisted on sliding to “D” even when I wanted to back up. It kind of reminded me of my last ex-wife.

At least the LC’s door-panels were stunning, with tops that curved around to meet the dash and swoopy centers in suede anchored by sleek satin door-handles.

Naturally, the form-fitting black-leather seats were special, too, with sculpted bolsters and suede black centers. Technically, the LC has a back seat, but it is so tiny that it mostly serves as a package tray.

I like to think I’m too young for a Lexus – my creaks and pops notwithstanding, but if the LC is the new Lexus, sign me up – oversized grille and all.